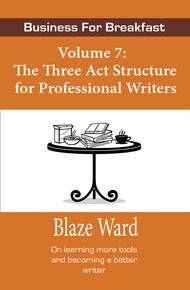 You've learned how to use the Seven Point Plot Structure to tell a good story. However, a good writer needs more tools in her toolbox.

Understanding the three act dramatic structure can give you a new way to build stories. Expanding to four acts, five, or even two, greatly enhances your repertoire.

Come explore the way we write for the stage as a method for increasing your skillset and becoming a better writer.

Some of the topics discussed include:

Blaze came to novel writing by way of the theater and screenplays. He thinks of story in acts, rather than as one continuous process. He combines the classic seven-point-plot that most writers learn with a three-act structure to come up with a very insightful and necessary way of looking at storytelling. – Kristine Kathryn Rusch

Unlike most of you, I came at modern fiction through a distinctly roundabout and confusing path that I wouldn't recommend to anyone who wants to be sane at the far end. (No comments from the peanut gallery, please.)

In the beginning, I was a poet. Long-form, un-rhyming, not following to any formal structure. (Technically, in the very beginning, I was an actor, and learned to breath the words before I worked myself up to writing them, but that's a story that requires you ply me with alcoholic beverages to hear.)

I don't rhyme. I write as I speak, using the turn of the language and the spaces on the page equally to impart a lesson. I've even published some of it for folks who wish to partake. The Forestal is a long piece. Epic and dark. Written over the course of about two years when I was in grad school, out in the nasty lands. You can see the sudden transition to desert as a motif for me being in a new land. Plus an imperial shit-ton of anger, unrelated, but nonetheless present.

Later, (much later, as we measure the miles), I gave up writing formal stuff and contented myself with table-top role-playing games (and the characters therein). That assuaged my creative needs. I did write a few stories in those days, but most of the interesting stuff was contained in an RPG I created in the late 90's that will never see the light of day, because then I'd have to share royalties with someone. (I'm currently in the process of giving the man that thing he wants most from this world. The Last Word.)

Later, I started writing stage plays. No, I don't know why either, except that J9 gets most of the blame there. She deserved it. Along the way, I had written several bad one-act plays, but I was using them to work out other things, so they served their purpose.

Then I met a dude who taught screen-writing. I worked with him for several years. (One of these days, we might even stumble into five million dollars or twenty-five, and make some of them into actual movies. Again, another story for another time.)

I learned the craft of screen-writing from him, which is entirely different from genre fiction, because it is primarily an auditory thing, with visuals a distant second and the written work a vague afterthought.

So when the woman who would become Wife #2 (Fabulous Publisher Babetm) convinced me to start writing for publication, I came at it a different way. Different analysis. Different format. Different structure.

That's because I started out in the Three Act Dramatic Structure for telling a story, something she hadn't really ever been exposed to all that much. Writers are taught to do it a different way, but I never learned those lessons, so I still see structure in Acts. (She's finally gotten used to me talking about any current story in terms of which Act I am currently pursuing.)

Later, she explained to me Lester Dent's 7-Point-Plot-Structure, which was totally foreign, but underpins the basis of genre fiction. I had to write The Beginning Storyteller just to make sure I understood everything. (If it makes any sense to anyone else, that's just a bonus.)

But she suggested that my understanding of Acts and such was foreign to many of you, and would be a useful tool in your toolbox. That's all anything is. You learn words and put them together in new ways. You learn new ways to organize your thoughts on the page and paragraph differently as an exercise in mind control. (Stephen King is the reigning master of mind control.)

As the 7-Point-Plot-Structure (hereinafter 7PPS) is a tool, so is the Three-Act-Dramatic-Structure (hereinafter 3ADS, because I'm lazy and they aren't paying me by the word here.) It is a different way to think about your plot, and your story arcs, following the most visual methodologies you will find when you watch a movie or TV show.

Hopefully, it will help make you a better writer.