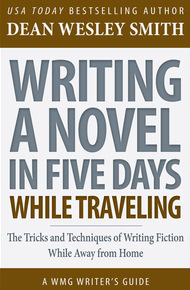 One of the most prolific writers in modern fiction writing shows you how he does it.

Author of over one-hundred-and-fifty novels, USA Today bestselling writer Dean Wesley Smith gives an intimate day-to-day, minute-by-minute account of how he wrote a full novel in five days while traveling.

From tips on how to prepare for the writing to what to do when the trip gets in the way, Dean deals with it all. A moment-by-moment account of what it feels like to write a novel in five days while traveling.

And yes, he wrote this book while writing the novel. A don't-miss read into the mind of a prolific and bestselling fiction writer.

When life gets complicated, Dean likes to complicate it even more. He sets challenges for himself as a writer just to see if he can complete yet another high wire act. When he completes those acts, he blogs about them and then he turns those blogs into a book. When he decided to travel in 2017, he wasn't sure he could write a novel on the trip. So he challenged himself to do so, and then he did it. If you aren't reading his daily blogs on writing at deanwesleysmith.com, you're missing some of the most challenging and insightful blogs on writing in the business. His daily posts inspire as much as this book does. Inspire…and remove excuses, something Dean does best. – Kristine Kathryn Rusch

Yup. A crazy idea. Especially considering I have not once been successful at writing while traveling.

How's that for a negative start?

So I figured it was about time to teach myself how to do this and as I figure it out I might as well write this nonfiction book as well as the novel.

Otherwise, it will be an entertaining failure for you all to watch right out here in public.

And what's really silly is that I will be doing all my normal e-mail, normal workshop stuff, and still doing the CFO job for WMG while I am gone. I will be cutting nothing out.

Yup, nothing will seem different from your end except the content of these blogs.

So if you have questions or want to sign up for a workshop, feel free. I will be doing all my normal computer work every day, three times per day.

Some Considerations to Start

Today is Sunday and I will not start the novel until Wednesday. But I am doing these nonfiction introduction chapters each night ahead of that while traveling.

My first consideration in getting ready for something this crazy is that I do not have a laptop computer. I have an old iPad, but don't use it much at all anymore.

I use massive Mac computers with second screens. I have three set-ups like that. One for my internet at home, one for my writing computer, and one in my WMG office.

So this morning around 10 a.m. I put a pillow in the back seat of my car (a very smooth-riding Cadillac CTS), carried my big internet computer out and put it on the pillow, screen toward the seat. Put another pillow between the screen and the seat and then covered the entire thing with a blanket and strapped it in with a seat belt.

The real advantage of driving: I can pack as much as I want. And I don't much care for flying these days, so driving is more fun anyway.

So now I am sitting in front of my big internet computer in a really nice hotel suite somewhere south of Eureka, CA. I have just finished doing all the work for the coast anthology workshop and got out the next story for the writers to write.

And I have answered all my e-mail earlier and am now writing this introduction.

This desk and chair is actually as comfortable as my chair at home after I put two pillows under me to get me to the right height.

Why Do It This Way?

Again, many writers have learned how to do this. I have never done any writing while traveling. So some of this stuff I am discovering might seem logical if you write and travel. I am always up for tips in the comments. (grin)

If I had to fly, I never would have considered doing this.

Since I am doing this blog every night on how to do this (or how to fail at it in spectacular fashion) I had Allyson at WMG mock-up a cover for this nonfiction book. That is for decoration here and also to keep me motivated.

Second, since I never write with any outline or anything, I figured I would at least pick a title and a series to write in to give myself a jump. And since all five days of writing this will be while I am hanging around with friends and playing poker in Las Vegas, I might as well pick a series set in Vegas.

The two characters in the last novel live about three blocks from where I will be staying, so that will be fun. I came up with a title for the novel and Allyson did a mock-up cover for me which I really, really love.

I have no plot or even idea for the book and won't until I sit down to write. Not even going to give it a thought. But if you are trying something like this, it might be an idea to plan ahead a little or work on a project you have already started.

So now, after nine hours of driving today, I have another nine hours tomorrow and then a bunch of assignments for workshops to do.

The Traveling Three Days Before Starting a Novel

Since this is a book about travel, I figure I had better detail out each day a little.

Storms were burying Portland and the I-5 corridor in ice and I-84 was shut down. So my only safe choice was to hug the coast going south to stay out of most of the mountains.

I learned today that my memory of making that drive twenty years ago wasn't accurate. Going down the Redwood Highway (101) in torrential rains was not fun in the slightest. The weather people called it an "atmospheric river of moisture" and it was. Wow.

I stopped four times along the way, once in Newport, once in Florence, once in Coos Bay, and once in Eureka. Took about nine hours.

In the summer that would be a two-day drive because of traffic, but thankfully I had none today. No one was stupid enough to be on the roads today but me, I guess.

The drive down the Oregon Coast was stunningly beautiful, even in the winter and pouring rain. I forgot how really beautifully alien and remote this part of this country is. If you have time, worth seeing, folks. But caution, this is a long, long ways from anywhere.

Checked in, got my computer set up, got some snacks to eat, did my e-mail, and then watched television for a while until it was time to do workshop stuff and then write this.

So tomorrow another nine hours of driving.

I will have chapter one of this nonfiction book tomorrow night from farther south on this crazy trip.