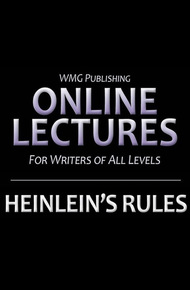 Robert A. Heinlein, in 1947, in an effort to help new writers coming in, gave what he termed as his "business habits." He basically said that if followed, his rules will make a want-to-be writer into a professional writer.

But Heinlein acknowledged that the simple five rules are almost impossible to follow. Heinlein said, "…they are amazingly hard to follow–which is why there are so few professional writers and so many aspirants…"

USA Today bestselling writer Dean Wesley Smith talks about each of the five rules, why they seem so difficult, why they work for writers when followed, and how to follow them even in this new world of indie publishing. Dean started following all five of Heinlein's Rules in 1982 and since 1987 worked as a full-time professional fiction writer. He still follows the rules to this day.

You may not end up following Heinlein's Rules, but you will learn a vast amount about writing from these 15 videos.

One of the most famous science fiction writers who ever lived, Robert A. Heinlein, wrote up a list of business rules for writers, guaranteed to turn them from wannabes into professionals. The rules are simple to read and oh, so, difficult to do. Dean Wesley Smith used them as inspiration for his writing career when he started, and in this 15-video lecture, he will inspire you as well. Challenge yourself to follow Heinlein's rules. You might just end up with a decades-long writing career, like Dean. – Kristine Kathryn Rusch