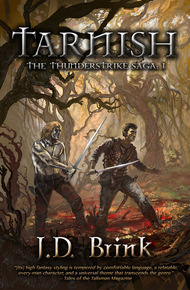 If taking a college fencing class, eating from the trash can, and smelling like an animal were qualifications for becoming a sword-swinging barbarian, J. D. Brink might be Conan's protégé. Instead, he's served aboard a warship in the Pacific, collected intel from foreign submarines, trained corpsmen to save Marines, and cared for patients in Kuwait and Japan. Today (spring, 2018) he and his family are beginning new civilian adventures in northwest Ohio.

Everyone knows the stories of the Colors Three. That trio of adventurers who traveled the breadth of these realms in the post-war years, stalking the traitorous Crescent Moons and bringing justice to those downtrodden left in the Dread Duke's wake.

Tavern masters have been spinning those tales for ten years. Ian the Black and Trevor the Red are ten years older. More so, for the warrior's life is a hard one. And Gregor the Golden? Most likely dead along a mountain pass, in search of more glory than any mortal man needs.

Who, then, will defend Redfield when evil rises from the Blood Marsh?

Billy Cole is the sixteen-springs-old son of Ian the Black. Maybe older. Being the heir of a legend is a heavy burden to bear. And though "Billy Strong Back" is used to hard labor, it takes more than strength to become a man. And more than a sword to become a hero...

"Duke's beard," he muttered, cursing himself, "I shouldn't feel bad about it. The stubborn old bear would never have let me go."

That's why Billy had tried to get out of Redfield before his father woke up from his beer-deepened slumber, a condition Billy himself had encouraged the night before by keeping his father's mug full. But his plan hadn't been perfect. Ian Cole had woken just before Billy could escape the clamoring townsfolk, who were still stocking his saddlebags and wishing him well. He'd seen the confusion, then rage on his father's face, followed by... melting.

Ian Cole, the great bear of Redfield, had simply melted on the spot; there was no other word for it. Thankfully no one else had seen it—the entire crowd was watching their young savior about to depart—but from the vantage of horseback, Billy could see everything.

He wiped some water from his eye, hoped it was rain.

"No tears," he told himself. "No heroic damn epic begins with the hero crying himself to sleep. I've got too much brass for—"

His ears sharpened, tuning past the cricket chirps, and his eyes probed the absolutes of moonlight and darkness. Had he heard a mumbling voice on the breeze?

Blue-black shapes shimmered all around, the tree leaves bristling as the hair did on his neck. His white horse glowed under the moon, shuffling nervously, pulling at his reins and bending the small tree he was tied to.

Billy struggled to free himself from his wool cocoon.

A thump between him and the road. Someone cursed. Billy remembered the fallen branch he'd almost tripped over.

Finally, Billy burst from his blankets, snatched the scabbard from the ground next to him, and jumped to his feet.

Just a few yards away stood a bestial figure half-crouched and ready to spring. Triangular ears perked at the top of its head and its long muzzle snarled at him. A dagger in its hand reflected the moonlight. Billy's mouth made circles like a dry fish struggling for water: W-W-Werewolf?

Meadow Guard made a feeble buck in his peripheral vision. The motion broke Billy's paralysis and his hand slapped onto the hilt of his sword.

"Wait!" the werewolf barked. "Think about this, mate."

Billy's vision sharpened as he stared. He saw now the gnarled condition of the beast's ears; the mangy, patchy fur; the dry, squinty eyes. Were there even eyes there or just shriveled sockets? The white points of upper teeth were raggedly gapped, it had no bottom jaw at all, and the fur of its neck rose and fell with the breeze. This was just a man wearing a skinned dog on his head!

Billy clenched his teeth and stepped forward. He drew the first several inches of Sliver's blade from its sheath.

"Wait!" The dog-man held up one hand and took a step back. The dagger in his other hand danced around. "Don't be stupid, mate. You don't have to die here."

Billy licked his lips. Just an ordinary man, a brigand off the road, maybe even Sprat's Pirate Trail. And only a coward would kill a dog to wear as fashion. Billy was braver than this scum; born of solid brass, Trevor always said.

"You're smarter than this," the dog-man said. "Just put the sword down and walk away. This is your last chance."

"This is your last chance," Billy cried, fully drawing his weapon. Sliver was forged by his father specifically for Trevor, a curved blade designed for grace rather than power. Years later, Trevor would trick Ian Cole into making a duplicate sword, which he would then use to train the blacksmith's own son.

Billy leveled the sword tip at the dog's eyeless sockets. His left hand tightened on the scabbard; he knew it could be used as a desperate shield or even a weapon in combat.

The dog-man danced backward. His dagger whirled around a few times. "Wiley?" he said.

Billy didn't understand until a nasally voice answered from Meadow Guard's position: "Got it, boss."

Now Billy danced back, widening his stance to include this second, yet-to-be-seen opponent.

The dog-man lashed forward. Sliver responded in an exaggerated arc and Billy's attention narrowed instantly back on him. He knew it was fear making him sloppy, swinging wide and wild. This was his first real fight, after all.

"Give up, mate," there was a smile in the dog-man's voice, "and I promise you'll walk away."

The dog head tilted sideways, as if considering something. Moonlight found a nose and bristly chin beneath the snaggle-toothed jaw. "How old are you?" he asked, the question drawled out.

Billy hesitated. "Older than you."

"Old enough to run you through." Billy winced at the rhyme as soon as it passed his lips.