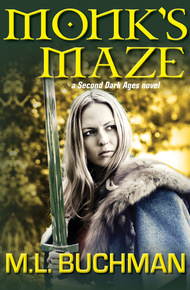 The Second Dark Ages ends—the power of the Maze awaits.

The Age of Technology died in a single cataclysmic night, shattering civilization and casting it into the Second Dark Ages. A two-century descent that only now moves toward the light.

Meghan Taylor, "The Watcher of Iona." A lone guardian on a distant Scottish island stands against the greatest evil mankind has ever known.

A lone monk returns bearing a perilous legacy. He also carries a terrible gift; a gift of power meant for a woman's hands.

Brother Colin Clark's handlight slipped from his chilled fingers. It bounced once, twice, a third time, clattering loudly off the rocks in the quiet of the night, then went out.

He lunged for it and clipped his shin hard against a boulder.

"Blasted St. Nicholas." Tumbling forward, he crashed onto the ground.

His hands wrapped about his shin were filled with a sticky warmth. The only thing that wasn't freezing on this stupid planet. Why of all people had he been the one sent back to Earth? Many of the other brothers had been eager for the adventure.

"Let them," he'd wanted to shout when Brother David chose him as the Order's emissary.

"Let them be the ones sent to lie in the dark." But no, it was quiet, unassuming Brother Col who had to lie on the rough rock of this remote island with the pain rocketing up his nerve endings. Blinking his eyes did nothing to reveal even the vaguest of shapes in the overcast, moonless night.

"So don't lie in the dark." Brother David's cracked old voice was as clear as if he were right beside him rather than a memory that he'd left a dozen light-years behind on New Kells circling a friendly orange star.

"Okay, turn on the light switch." He gasped when he realized he was talking back to the old man. He ducked the scowl more fierce than a slap could be. A year in transit aboard ship and he still feared the old monk.

Besides, as far as he could tell, there weren't any light switches on Iona, or on the planet for that matter. Every observation he could make from orbit revealed no use of any broadcast media. No powered vehicles even.

"Find the handlight." Brother David was always full of orders, but he did have a point even if he was just a memory.

Colin rose to his good knee and addressed the darkness.

"I would greatly appreciate it if any crawlies or other nasties this planet has, would please move aside this night." His voice fell flat and was ripped away by the wind into the vast darkness.

He reached out with hands that retained little feeling and began to probe the cold, wet grasses and rough, rocky crevices. He poked about in a slowly widening circle.

His arm plunged elbow deep into a freezing puddle before he realized what was happening. He jerked back and caught his elbow on another blasted rock, rose to his knees only to put weight on his abused shin, and collapsed once more to the ground.

"Bloody hell!" He was in too much pain to bother being shocked by his own language. Flopping sideways in the grass he wrapped his good leg over his throbbing shin and a hand about the twinges shooting up his arm. He'd never found that particular bone to be the least bit funny. Though all the other brother's certainly delighted in how often he rapped it.

He needed shelter. Now. He needed to be back on the deorbiter, which was hidden in an old barn a kilometer away over rough ground. He needed a building, but he was completely lost in the darkness even before he'd dropped the stupid handlight. He'd take a stone wall right about now and be happy. Well, happier.

A drop of rain splashed on the bridge of his nose and spattered into both of his eyes.

"Father, Son, and the Holy Ghost!"

For a minute, perhaps two, it wandered about the ruins of the abbey on Iona. Then, as she'd reached for the binoculars, it spun about and disappeared.

No light returned. No light on Iona.

Please, no light on Iona.