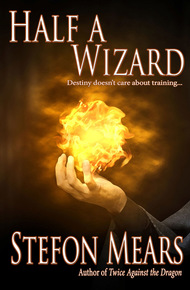 Half a Wizard by Stefon Mears

Half warrior, half wizard, all adventure.

In a world where elves build on the bones of lost civilizations, Cavan Oltblood carves out a path to adventure. Not quite a warrior and not quite a wizard, this king's bastard rides with Ehren the smiling priest, and Amra, the deadliest swordswoman alive.

Killers burst through the door at the worst time. So much for Cavan's bath, much less his date.

Someone wants Cavan dead. Someone willing to kill everyone Cavan loves, to steal something Cavan doesn't know he has.

Half a Wizard, a novel of high fantasy adventure, full of magic and action where the decisions of one person can affect the fate of kingdoms. From Stefon Mears, author of With a Broken Sword and Twice Against the Dragon.

When assassins burst through the door, what angered Cavan most was their timing.

After six weeks on the road, half of them just crossing the Dwarfmarches — which smelled just as bad as everyone said they did — Cavan would have liked to pass at least one pleasant evening without someone trying to kill him.

And this inn, the Bent Spike, should have been perfect. First, because it was on the edge of town, so no one important should have had time to spot Cavan, much less pass along his whereabouts to anyone who wanted them. Riverbend wasn't even much of a town, just a way station for those who shipped their cargo down the Red River.

And second, the Bent Spike bustled with people who should have been too busy with their own business to worry about Cavan's. The inn stood three stories tall, the first of fitted stone and the top two of some local green hardwood. Two main rooms on the first floor, on either side of a central kitchen. One full to bursting with travelers and another featuring privacy for those willing to pay extra for a table to themselves instead of sharing space at long bench tables. Cavan and his fellows had even joined the throng in the more public room rather than draw attention by dining in the more private room.

The inn boasted good enough ale to satisfy Amra, and that alone was an accomplishment unachieved in at least a season (to her constant lament).

And upstairs the Bent Spike featured private rooms with private baths on the third floor for those with the coin to pay. Amra and Ehren shared a room on the second floor, but Cavan never skimped when he had coin.

Now he had a corner room all to himself. With six thick beeswax candles in sconces along the greenwood walls, all already lit and filling the room with a pleasant smell and gentle light. Shuttered windows — painted red — that could bar to keep out thieves. A hammered copper bathtub along the wall, already steaming with hot water. Next to the tub a shelf with a copper ewer, a brush, towels, and a yellowish chunk of actual soap.

So much space to call his own. Well, for a night, at least. Six strides across each direction, and Cavan was not a short man. He was long and lean like the warrior he should have been. The warrior he was supposed to be. With swarthy skin and brown hair as soft as his brown eyes could be hard. When he needed them to be.

He had the look of a warrior. He still carried the longsword he'd trained with for so long, but he lacked some of the most important instincts. Or at least, that was what Ser Dreng said when he sent Cavan away.

That was the first thing he'd done when he finished his dinner — roast duck with barley and carrots — and finally saw just what his coins had bought him for the night.

An actual bed. With pillows instead of a rolled up cloak. And both stuffed with duck feathers. So soft Cavan had almost fallen asleep immediately.

But he'd arranged an assignation with a barmaid named Polli, a slender lass with fiery hair and smiling eyes. And he had no intention of being either asleep or road filthy when she arrived.

So he had hung his undyed roughspun cloak on the hook beside the door, along with his sword belt and pouch. His pack he set beside them on the floor. He stripped off his pale green tunic, brown riding breeches and calf-high leather boots. Those he laid out beside the tub, to see to later.

He might have locked the door. He might have even barred it. But he wasn't sure exactly when the barmaid would arrive and the thought of her entering to find him in the tub was not unpleasant.

But Cavan's life rarely worked out that way.

Thus, he was naked, wet, and soapy when the door burst open.

Two assassins, but not professionals. Members of the False Dawn all wore thin, trim mustaches dyed purple — regardless of their sex — and these two were smart enough not to pretend to be what they weren't.

What they were was free-swords hoping for easy coin.

Shaggy black beards and short, field-hacked black hair. Weather-beaten skin. Gray wool cloaks and leather breastplates over roughspun. They both had naked steel in their hands, whereas Cavan was only naked. And sitting in a tub full of water.

Cavan shunted power into a double-handful of water, tossed it in the air, and said in a ringing voice, "Zeha da."

Thick white mist filled the room. Cavan slipped out of the tub. He touched wet fingers to his eyes — wet from the water he'd thrown, not redunked in the tub — and whispered another word.

Now he could see through his own mist.

True, Cavan had failed to become a warrior. And he hadn't quite managed to become a proper wizard either, before Master Powys sent him away. But Cavan did have his ways.

So did these assassins, unfortunately. They might not have been from the False Dawn, but they weren't stupid. They already had the door closed and stood back to back, half-crouched, swords waving back and forth to ward off any blind approach. Effectively blocking the only civilized exit.

"Doesn't have to be like this," one said. Rough voice, like something tore in his throat and never healed right. "Offer us your room and your money and we'll forget we saw you."

Interesting. Or a trick to get Cavan to give away his location.

Truth was, Cavan would rather have paid them than killed them. But pay men like this once and more would show up. And more after them. Not a sustainable practice, and besides, it would mean he couldn't afford to treat himself to rooms like this one.

The mist wouldn't last much longer. If only Cavan's sword and pouch weren't on the other side of the assassins, he might have been able to dispatch them easily. But as it was…

Cavan picked up the copper ewer, dumped its cold water into the tub.

The assassins heard, began side-stepping that direction, staying back to back with swords still swinging.

Quietly as he could move, Cavan crossed the length of the tub. The swinging swords getting closer and closer to his naked flesh now, goosebumped as it was after getting out of the nice hot bath. Cavan kept his focus and laid the ewer across the ridge of the copper bathtub.

He shunted power through the ewer.

The ewer clung to the tub as though it were frozen in place. And the two swinging swords yanked down at it, flats of their blades sticking to the ewer as though tub, ewer and blades had all been forged from a single huge ingot of blended metal.

The assassins stumbled as their swords came down, tried vainly to pull them free.

Cavan tackled the closest assassin, the one with the rough voice. Took him to the floor, slamming the assassin's head against greenwood. Dazed him. Cavan had just enough time for a solid punch to Rough Voice's jaw. Stung like hell, but worse for the assassin. Not out cold, but Rough Voice was dazed and shaky when his partner pulled a dagger and turned.

Unfortunately for Partner, the dagger got caught in the spell and yanked out of his hands to bind against the ewer.

Cavan rolled over and kicked his shin between Partner's legs as hard as he could. A groan of pain, and Partner bent forward.

Cavan grabbed Partner and yanked him down. Cavan roared and used one assassin as a weapon to attack the other, smashing Partner's head into Rough Voice's head until they both stopped moving. By then the mist had long since cleared off.

Blood on the greenwood floor now. Apparently both assassins had gotten their noses broken somewhere in there. Their lips cut up too. At least they were still breathing. Out cold, but not dead.

Cavan was naked, sweating and shivering both from the cold and the attempt on his life.

He was sitting in blood beside the two assassins when the door opened.

There stood Polli, slender and pretty in her blue linen dress, with all those red curls.

The spell on the ewer finally broke, and the ewer, swords and dagger clattered to the floor.

Cavan shook his head. Poor girl. He couldn't blame her a bit. He'd have to find some way to make apology before he left.

He stood and closed the door. Turned back to the two assassins, taking a better look at them now. He could see why Rough Voice sounded so harsh — deep scar all the way across his throat.

Cavan recognized them now. He'd seen them three times on the trek across the Dwarfmarches, guarding a caravan. They'd stood out among the other caravan guards. Partly because they'd literally set themselves apart, keeping to themselves and riding slightly to one side. Mostly, though, Cavan had noted the way they'd looked at him.

So much for Cavan's pleasant evening.