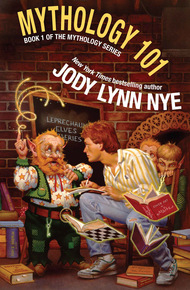 Keith Doyle, believer in myths, goodhearted nerd, general busybody, and business major at Midwestern University, discovers to his joy—and horror—that a secret village of pointy-eared, magical little elves are occupying a vacant level of the library building. Their leader, The Master, tutors students to pass difficult courses. Marcy, the girl of Keith's dreams, is already a member of the class. But the library is in danger of being torn down, thanks to a modernization campaign led by Keith himself. The students of the secret class hate him. Marcy is devastated. It looks as though the elves' home will be destroyed. Keith and the Little Folk need one another. The only thing that can save Keith's social life is elven magic. And the only thing that can save the elves is the magic of … free enterprise.

"Are all now present?" the Master enquired, squinting over the top of his gold-rimmed spectacles. The light of two dozen burning lanterns hanging around the huge room flickered off the glass and metal frames. It glinted almost as brightly from the Master's coppery red beard and hair. Even his pointed ears had tufts of red hair sticking out of them.

On the benches around the wooden meeting table, the Folk shifted to position themselves comfortably. It wasn't often the whole Council attended a village meeting, so though the benches were long, the regulars had to suck in their sides to make room for their more occasional companions. It was a sign of the seriousness of the situation that there was no banter, no friendly arguments between the young Progressives and the older Conservatives.

"Gut. Then I declare that the meeting is open," the Master continued familiarly. "I recognize the Archivist." He nodded to Catra, a young female who wore her long brown hair in a severe braid.

Catra stood up and shook two sheets of paper at the assembly. "These I borrowed from the very desk of the Big Folk Chancellor himself. They detail a proposal to demolish our very home! They wish to build on this site a new library building of great height and size. It will have a new foundation made by filling in all the lower levels with concrete." She shuddered at the image of a wave of concrete rolling over their village and handed the document to the Master, who blew on the wick of a lantern to ignite it, and read the document through by its light. He nodded affirmation to the others.

"We're lost!" Keva shrieked. For all her hundred and seventy eight years, she had a voice that carried shrilly to the distant walls and echoed off of them. Her fellow villagers looked around cautiously as if the Chancellor and his minions might hear her. "We must flee!" Her fellow Conservatives nodded solemnly.

"It's only a proposal at present," Aylmer said in a calm voice. He was a Conservative, too, but didn't approve of alarmism.

Holl, a chunky young fellow with thick blond hair, scratched thoughtfully at one tall pointed ear. "I think we should call in the help of the Big Ones who are our fellow students."

There was a general outcry. "No! You can't trust the Big Ones. They're too stupid." "They wouldn't help us. It's their own Chancellor and his Administrators who seek to put us out of our home." "Yes, ask them!" "Progressive! You want us to be annihilated; to have our culture swept away."

"The separation of aur folk fro' theirs must an' will continue," Curran, Holl's white-haired clan chief, told him severely.

"I think there are some that can be trusted not to do more than we ask," Holl insisted. "Ludmilla. No question of her, I hope. Fair Marcy, for example. And there's always Lee."

"Yes," agreed Enoch, a more somber-faced youth with black hair. "I know these well, and there are others, but I am not sure I would involve the young folk even if I trusted them."

"What about those peculiar walkings-about we keep hearing? Who's responsible for that? One of your trustworthy fellow students? You don't know either!" Curran snapped at Holl.

"I put it to a vote, then," the Master said, signaling for silence. "Those in favor uf asking for help vrom the Big Ones, raise your right hands." He counted. "Hands down, please. Those against, the left." There were no surprises. The Progressives voted in favor of Holl's suggestion. The Conservatives voted against the Progressives, whom they outnumbered two to one. He and Catra abstained. The Master felt that the Headman must remain neutral. Catra often declared that an Archivist could not take sides or it would ruin her objectivity. "Very vell. The motion is defeated at present. I adjure all uf you to put your minds to a solution, or ve may truly be homeless."

"I must return the document to the Chancellor's office before dawn," Catra reminded him.

"Qvite right. I must have a copy to study the details." The Master blew out his lantern. He picked up a sheet of handmade parchment slightly larger than both pieces of paper and laid it over the document. Stretching out both hands palm down above the parchment, the red-haired leader closed his eyes to concentrate. Under each of his hands, a shimmering blob of black print appeared and spread across to meet the other, then the joined mass rippled outward to perfectly straight square margins. No one made a sound until he was finished. It was a difficult task for one of their kind to work from paper that had been printed with iron and steel.

"There," he said, examining the big sheet. "Vell enough. It vill do."

"Master," Catra chided him gently. "I could have used the Xerox machine."