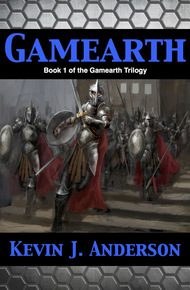 Gamearth: It was supposed to be just another Sunday night fantasy role-playing game for David, Tyrone, Scott, and Melanie. But after years of playing, the game had become so real that all their creations—humans, sorcerers, dragons, ogres, panther-folk, cyclops—now had existences of their own. And when the four outside players decide to end their game, the characters inside the world of Gamearth—warriors, scholars, and the few remaining wielders of magic—band together to keep their land from vanishing. Now they must embark on a desperate quest for their own magic—magic that can twist the Rules enough to save them all from the evil that the players created to destroy their entire world.

Melanie carried four glasses of soda to the table, hating the real-world role of hostess. "We can make popcorn later, if you guys want." She flipped a strand of brown hair behind her ear and stared at the master map on the table. Gamearth, their beautiful fantasy world.…

"Forget popcorn—try my dip instead," Tyrone said. "Black bean and shrimp this week. And I brought some sesame crackers, too."

David arrived, late as usual. He stuck the keys from his Mustang in the pocket of his denim jacket. His dark hair looked soft, but his eyes were hard. "We ready to play?" he asked, finding a seat at the table. He bent over to frown at the map and did not say hello. Melanie made him get his own glass of soda.

Her parents had found someplace else to go, as they always did when the group met at Melanie's house. At first her mother and father had stood on the sidelines to watch, curious and condescending. But the concept of a role-playing game seemed beyond them—where it was all pretend and no one really won or lost. The group played the parts of characters through adventure after adventure in a world created from their own imaginations.

Scott cracked his knuckles. "Hey, Tyrone—you know when geese fly south for the winter, how they always fly in a V-formation, right?   And one side of the V is always longer than the other, right? Why do you suppose that is?"

Tyrone pondered and shrugged. "Why don't you tell us, Mister Science?"

"Because there's more geese on that side!"

Tyrone coughed on his own dip. Melanie found Tyrone's reaction more amusing than the joke itself. Scott blinked behind his glasses, looking proud of himself but baffled, as if he hadn't considered the joke very funny in the first place.

Their group, the same group for two years, had started out playing with hexagonal graph paper, scrawling haphazard terrain markings with colored pencils. They were playing for fun, for something to do. But Melanie spent a month painting and color-coding each hexagon of terrain with bright acrylics to make a permanent master map on wood. She had looked at real maps to develop geography that made sense, deserts where the weather patterns might leave the air dry, forests where the climate should have been hospitable.

"Everybody's here. Can we start playing then?" David drummed his fingers on the tabletop. "Where were we last week?"

Melanie talked as fast as she could, trying to outrun his impatience. "My characters Delrael and Vailret were just about to go into the swamp terrain to rescue Bryl, their half-Sorcerer friend." Melanie pointed to the map. "He was captured by an ogre, remember?"

Melanie looked at him, but he kept his expression neutral. His brown eyes contained no emotion, his face showed no smile whatsoever. Something was bothering him. She didn't know what it could be, but Melanie thought he might try to take it out on the Game.

She gripped the dice in her hand. Twenty-sided. Eight-sided. Six-sided. Four-sided. They seemed to exude a kind of power, so much that she almost dropped them in surprise.

Melanie marked on the graph paper where her characters would begin their movement. She threw the dice.

Always remember this: every character on Gamearth was created by the Outsiders. We exist solely for the amusement of those who Play our world. Our ambitions, our concerns mean nothing—everything is determined by the roll of the dice."

—The Book of Rules