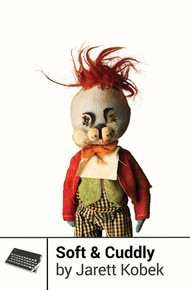 Jarett Kobek is a Turkish-American writer living in California. He's the author of four books including the novel I Hate the Internet, and the creator of an exclusive ZX Spectrum prequel of the same name.

A computer game so nauseatingly gory that it came with a barf bag. Bright druggy graphics that sickened scores of proper English parents. Gameplay so violent that it inspired one of Britain's most infamous killing sprees. Soft & Cuddly, released for the ZX Spectrum in 1987, wasn't quite any of these things. But in an age of manufactured moral panics, John George Jones's fluorescent punk manifesto sure pissed off a lot of people.

This book is a fascinating window into all kinds of topics I previously knew nothing about, all centered around the British gaming scene that sprung up in the 80s around an affordable and barely functional personal computer called the ZX Spectrum. Add to that that story of a punk rock teenager making intentionally punishing games in his bedroom and the dry wit of Jarett Kobek's prose, and you've got an exciting book that stands apart from anything else in our catalog. – Gabe Durham

Consider the case of John George Jones. The creative mind behind Go to Hell and Soft & Cuddly, two games released for the British-made Sinclair ZX Spectrum, a 1982 microcomputer with a whopping 48K of memory.

Go to Hell was published by Activision UK in 1985 under a dummy label called Triple Six. As far as can be determined, it's the very first graphical game that takes place in Hell.

The player explores the infernal netherworld, gathering up a series of multicolored crosses while wandering through a tableau of dancing devils, automated guillotines, and heads bisected by handsaws labeled "DIE."

When the full rainbow of Hell's crosses are collected, the player brings this haul to the giant green face of Alice Cooper, and, just like in real life, hand-delivering religious icons to a shock-rocker is a kind of beautiful victory.

Soft & Cuddly was published by The Power House, a budget subdivision of the British software firm CRL. It's very reminiscent of Go to Hell. The player's mother, the Android Queen, has been dismembered. Her husband, the player's father, has been beheaded.

The player must locate his father—whose body is kept in a refrigerator located at semi-random places across the game's map—and get directions to the parts of his mother's body. Each piece of the Queen must be returned to her husband in the refrigerator. (Every marriage is its own mystery.)

Sometimes when you're at a party and your brain has turned off its rapid-fire Morse code of suicidal ideation long enough to notice the other striving flesh, you'll see an atheist negging an attractive woman by attacking her belief in astrology. This will often involve trotting out an Arthur C. Clarke quote, which goes: Any sufficiently advanced implementation of technology is indistinguishable from magic.

The implication being that when technology advances past a certain point, it appears to transgress the laws of nature and thus, to the uninitiated, becomes a kind of magic. This is why office tech support workers are treated like necromancers. Every society treasures the rare ones who speak big words with the fire.

The Spectrum's ROM came with its own well regarded implementation of BASIC, but for any high level programming, a person had to use Assembly. The Spectrum's CPU was the Zilog Z80A, an ultra-primitive microchip best known for powering graphic calculators and teaching Intro Assembly to Comp Sci students.

As far as it goes, Z80 Assembly is not backbreaking. But it is unspeakably annoying, relying on a series of symbols and codes which only increase in complexity when interfaced with the Spectrum's features and quirks. One of Comp Sci's few truisms is that the first program anyone writes while learning a new language is one that spits out the phrase "Hello World!"

In BASIC, Hello World is simple:

To give a taste of Z80 Assembly's capacity to irritate, here's a variation on a Hello World program, with the greeting replaced by some remarkably obscene Turkish once overheard in the Konak station of the İzmir Metro:

So picture it. There's John George Jones. He's living in southeastern England. It's the mid-1980s, he's fourteen, and he's programming Go to Hell on his ZX Spectrum. In a few years, he'll be giving batshit interviews and writing astonishing letters to the gaming press. He's using Z80 Assembly, typing in a series of arcane codes and symbols to summon up a tapestry of Hell replete with demons and Satanic doings. It's very possible Alice Cooper is on the stereo.

Let's posit a twist on Clarke's idea and suggest that when John George Jones presses the fleshy rubber keyboard of the Spectrum, he is actually, literally, for real, practicing black magic.

The symbolism of Z80 Assembly is as dense as the language and ceremonies found in any grimoire. And it's as robust a system of retrieval as any invocation. A person jumps through a series of hoops in the hopes of achieving a predicted result, and if the formula works, then a demonic vision is summoned.