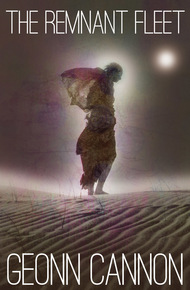 The Remnant Fleet by Geonn Cannon

Humanity and its allies have survived a devastating war against a common, mysterious enemy. Now, on a space station called The Quay surrounded by the wreckage of destroyed ships, the disparate races have come together in a way many thought impossible.

Currently enjoying an extended period of peacetime, the crew of the Quay is put on high alert after a smugglers' ship is attacked. A new and powerful enemy is searching for an incredibly valuable piece of space trash which could be used to construct something far more dangerous than a simple weapon: genetic material from the dawn of time, the key component to a device which can target and destroy specific races while leaving others untouched.

Fearful that they may be on the cusp of a new war deadlier than any ever fought, the Quay's executive officer Bauwerji Crow must find and stop an enemy she knows nothing about, or else face the spectre of genocide on a galactic scale.

I'm a big fan of Geonn Cannon's work (and I'm not alone: Geonn has won awards from the Golden Crown Literary Society for his lesbian fiction). The Remnant Fleet is probably his most classic science fiction novel, with its multiple species, interstellar societies, and complex politics, but he doesn't dial back on the queerness, choosing instead to imagine what queer might look like filtered through the lens of other species and their customs. It's expansive and amazing and a thrilling ride - just what hard SF should be. – Melissa Scott

The rogue planet Xibalba was ejected from its solar system several millennia before the first settlers landed on its icy inhospitable surface. There was an atmosphere and enough large flat plains for an enterprising group to create a rudimentary camp. Outside the jurisdiction of any species' law, the governor of Xibalba could grant immunity to anyone who found the planet and managed a safe landing. Soon the little camp grew into a colony, then a sprawling megacity with an ever-changing population. The only law recognized on the cold stone was whatever the governor or his family decreed, making it an ideal site for all manner of disreputable travelers.

Currently it was orbited by dozens of small ships. There were representatives from every spacefaring race, patchwork go-fasts and hail-makers that carried contraband from one port to another. The hail-makers would skim across at low altitudes to drop their packages in remote areas of a target planet. Go-fasts were eviscerated ships that were designed to break atmosphere faster than anyone pursuing them. The hulking vessels orbiting the perimeter of Xibalba's orbit were designed to ensure that every law-keeping organization in the vicinity respected the rogue planet's accords.

Cicerone Drayton considered Xibalba her second home. To be more honest, she considered it her first home. Earth was just the rock where she happened to be born, a place she'd escaped as soon as she was old enough to sign up for a trip to the Quay. She lived there from the age of twelve, sleeping in dead-ends and repair tubes. The station was large enough that she didn't have to worry about work, but soon work found her. She was a very good thief, a pickpocket and confidence artist who could convince anyone to give her anything. When she couldn't filch enough money to buy food, she convinced clerks and butchers to provide a free meal.

After a few years of saving and trading up, she was able to buy her own ship, free and clear. Her original goal had been to escape, get away from Earth and other Humans to see what the universe had to offer. The other races capable of interstellar travel refused to share the technology, although they had been willing to "cooperate" when it came to building the Quay. It was easy to understand why. The Paisian, the Karezza, the Acapsian, they all found the station useful. Giving Humans the ability to leave their solar system and visit others would be granting them far too much freedom.

Cicero wasn't a self-hating Human. She was proud of who she was, and she wouldn't trade her Humanity to be any other race. And there was a certain distinction to being the only Human to travel so far. She was the only Human many aliens had ever met, and they treated her like the rare breed she was. Then there were the kinks. Acapsian who had never seen a Human naked before. Karezza who were intrigued at the possibility of bedding a new species. Cicero encouraged their proclivities.

She was the renegade Human, cast out from her home system to float adrift through the universe. That was why Xibalba felt like home to her. That, and the fact its population accounted for ninety percent of new business. Currently she didn't have any contracts to fulfill, no merchandise to recover, and nothing on the schedule, so she aimed her ship toward Xibalba to see what jobs could be had.

The Sastruga was a gorgeous little ship. It was powerful and fast and with enough nooks and crannies to hide an entire Delianes cruiser if she happened to get one and had the time to break it up into smaller pieces. The engine was a mishmash of Acapsian and Paisian tech, the weapons and structure were Karezza, and the thrusters were Sautoriaun. The only part of the ship that was Earth-designed were the creature comforts; beds, chairs, couches, et cetera. If there was one thing Humans did right, it was comfort.

She sat on the bridge with her boots up on the console. Xibalba loomed on the theater-sized viewer a few feet in front of the bridge. The little rogue planet was beautiful. It was near enough to the neighboring system that the sun caught ice crystals in the atmosphere. The harsh and unwelcoming nomad was suddenly ringed by a halo, and spires of light shot out into the darkness.

Cicero had a bag of helib roze, a Balanquin delicacy, and she popped another one into her mouth as her instruments began beeping an alert. She dropped her feet to the floor and waited for the roze to dissolve on her tongue before she activated the intercom. She opened the link to engineering.

"We're closing in, Aryana. You ready?"

Aryana Barrien, her Balanquin engineer, responded within seconds. "I'm always ready. Just tell me where you want us to set down."

"West side of the Taplinid district."

"Want me to rest it on a specific stone?"

She released the key and scooted her seat closer to the console. The Taplinid district was as good a place as any to begin looking for work. She had some contacts there who would at least have some leads for her. She was trying to think of which one to contact first when her communications screen flashed with an incoming message. She reached over and accepted the call.

"Captain Drayton of the Sastruga."

"Captain," a gruff Karezz man said. "Which fleet is that rank from?"

"Whichever one has the best perks, Zuk. You have work for me?"

He reclined in his seat. "That depends. How is your chelseet?"

"It clanks," she admitted. "I don't have much cause to talk to your kind conversationally. It's always 'hand it over or I'll cut your throat' kind of talk."

Zuk grunted. "There's a guy here looking to move a product. He's skittish and hard to understand even if you're fluent. But I think he can cough out some yun-voo."

The idea of speaking in yun-voo irritated her. Universal Vocalization was a language devised hundreds of years before Humans escaped their solar system. Devised by the Paisian, it put everyone on equal footing without giving dominance to any one species. Cicero found it difficult, but she could speak it well enough in a pinch.

"Perfect news. He'll be waiting for you at Benjo. He's J'to-Karezza, probably the only one in the joint, but he'll be wearing a purple jerkin just so you can be sure. I'll let him know you're coming."

Cicero knew that J'to-Karezza were from the smaller sub-continent of their planet. He would have slightly different coloring than most of the Karezza she'd dealt with in the past. She watched the instrument panel as they came in for a landing, cutting through the atmosphere at a good clip. Aryana kept the engines burning at the right angle and thrust, but when they hit sky she would have to take over the steering. "Anything else I need to know? How has the world fared since I've been gone?"

"Riots on the outskirts, but what else is new. Quyan got exiled to the wastelands."

That was surprising, but she didn't let her reaction show. "I guess his bankroll finally ran dry. Protection only works if everyone gets paid. We're going to make landfall in about three minutes. Give me an hour to make my way to Benjo."

"An hour?" He looked away from the lens. "I have you coming in hard near the Taplinid district. What's going to take you an hour?"

Casing the location, checking for spies and snipers, gauging the safety of the bar, and watching the man she was supposed to meet to see if he was acting suspicious. Out loud she said, "You know how girls like to shop. Might be some fancy new gear to pick up."

"Try not to keep him waiting too long."