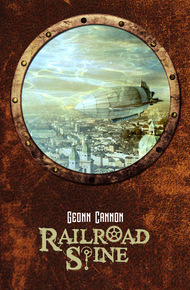 In a world where a little knowledge truly is a dangerous thing, Candice "Dice" Bodger is about to get an awful education.

Employed by the military as an airship captain, Dice knows exactly as much as she needs to get her cargo from one field to the next. Information is fiercely regulated, and sharing of knowledge is punishable by death. Dice has no interest in learning until she begins an illicit romance with the engineer assigned to her ship. The romance is shortlived when the man she loves is captured and Dice's crime comes to light. Dice, though spared execution, is forced to give up her ill-conceived child moments after his birth. Despondent, she is given a new lease on love when she falls for the midwife who helped her through the pregnancy.

Marked as a criminal and deciding she might as well earn her tarnished record, Dice tracks down the group of rebels her lover belonged to and offers her services as a smuggler. In exchange, the rebels agree to help her find classified information that could lead her to finding her son.

Her work as a smuggler frequently puts her in danger but Dice soon discovers the true cost of crime when someone close to her is fatally injured. Faced with losing yet another loved one, Dice decides to take drastic measures that could destroy the entire rebellion… or put an end to the government's tyranny once and for all.

Full disclosure: I commissioned a short story from Geonn a few years back, and got my first glimpse of airship pilot Candice "Dice" Bodger. I adored her, and nagged Geonn until he wrote the novel-length version. And what I got was American steampunk, a brilliantly realized dystopian future. This is a world where information is power, where no one is allowed to know more than the bare minimum necessary to do their job. By turns steamy and sweet, exciting and thought-provoking, Railroad Spine examines the prices its characters are wiling to pay for the freedoms that matter most. – Melissa Scott

Over the next few weeks, Peri's visits to see Dice grew more frequent. They raided the waiting area for chairs and a table, hauling them into the ward and setting them up so Dice didn't have to spend all day in bed. Peri would do her paperwork at the desk, and Dice caught up on new developments in flight. After so much time speaking freely with Levi, Dice found it awkward to fill silence without treading on illegal topics.

"Have you ever thought about flying?"

Peri shook her head without looking up from her files. "No."

Dice shifted in her chair. "I mean, if you had the choice between doing this and having another job, what would you choose?"

"I'm not cleared for any other knowledge. I like being a Midwife." She looked up and smiled. "What's with all the questions?"

"Just trying to pass the time."

"Ah. Well, we can't talk very long on illegal subjects. But you could always tell me about the places you've been. I've always wanted to travel."

Dice took the diversion. She talked about Calafia Peninsula, Allegheny, and made up tales about Native territory to Peri's delight. The first time she made Peri lean back and cover her mouth with laughter, Dice forgot about sharing forbidden knowledge and just focused on making that laugh happen as much as possible.

Peri had gotten a new haircut since Dice's arrival. Now it was tangled into a complex-looking knot that reached her shoulders, ending with a black silk ribbon. When Peri was enraptured in a task or just focused on reading something from her Mistyk, Dice watched her and quickly came to the conclusion that Midwife Novak was a definite beauty. She had always imagined Midwife's as humorless old dowagers, but Peri was quickly revising that opinion. And her smile... Peri had a devastating smile.

Weeks passed and, when Dice began to physically show signs of her pregnancy. Her nausea increased to levels she normally would have thought impossible, but Peri assured her it was normal. She spent more time in bed, too weak and tired to do anything but watch her midsection expand. Peri continued to visit, even though their days were mostly spent in silence, Dice was grateful for her company.

"I don't know how you managed being here by yourself for so long."

Peri shrugged. "Sometimes I would sing."

Dice laughed. "Have you heard from Administration yet? Have they gotten word to Levi about..." She gestured at her stomach.

Peri shook her head. "They say he's in transit."

"Right," Dice said. She looked toward the window and tried not to be angry. She could see Behemoths sweeping slowly over the landscape, angling for a dock in the hangar. Was Levi on board one of them? Ignoring summons and pretending to forget to check in? She wouldn't blame him if that was the case. Had their positions been reversed, she might have been tempted to ignore these notes as well. He'd just wanted to fuck his Airskip. Why did that have to be a lifetime prison sentence? She wished him well, without bitterness. He was a man and, therefore, he could move on from their mistakes.

"How about the Tamerlane?"

"There is news of her," Peri said, glad for the change to happy news. She took a folder out of her bag and withdrew several sheets of brown paper connected with a metal fastener. "I wrote it down so I wouldn't forget."

Dice spent the rest of the afternoon going over the notes and itinerary of the people she had once served with. It was an easy way to forget where she was and how she was shackled, but eventually she finished reading and had to remember where she was. Peri brought her dinner and ate with her, then wished her goodnight with her customary kiss to the eyebrow.

She hated the nights worst of all. Then she was truly alone, lying in the dark surrounded by empty beds, and her only company was the child growing inside her. At first she had found positions that let her ignore the changing shape of her body, but eventually that was impossible. Eventually she began to cradle the bulge, first through her hospital blouse and then lifting it so she could see the shape in the moonlight.

Women were supposed to love their children, their babies, even before seeing them. It was chemical blackmail, in a way, but Dice knew it was more than that in her case. She was supposed to fall in love with her child, yes. But the adoration she soon started to feel for the nameless, faceless person went beyond what any pheromones could artificially manufacture.

When Peri left her at night, Dice started pushing down her blankets and lifting her blouse almost immediately. In the dark, hands holding the impossible shape of her abdomen, she would sing to the baby under her breath. "Blacks and bays, dapples and grays, go to sleep you little baby. When you wake, you shall have all the pretty little ponies..."

During the day she abandoned the standard hospital garb for a pair of sweatpants and a white knit sweater that Peri brought for her. She wore hospital slippers to shuffle through the corridors of the Maternity barrack. She couldn't move as quickly as she wanted to, and she quickly became frustrated at her pace, but moving was better than atrophying in her bed. She planned to leave Maternity as soon as possible after the baby was born so she could resume her duties. So despite the aches in her legs and the small of her back, she walked.

She walked through empty birthing rooms and a room filled with white plastic cribs that were as still as museum pieces. She felt like an antique. Leftover, forgotten. She stood in front of the glass until Peri came and found her, and they walked together back to bed so Dice could rest. On some of her other trips, she found the station where Peri was supposed to be doing work. It was tidy and small, with labels for every cubby and a small plastic figurine shaped like a fish. It felt odd to see such a vital part of Peri's life without Peri there, and she remained until it started to feel like snooping.