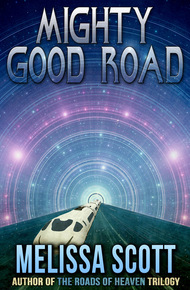 What does a big corporation do when a job is too dirty and dangerous for its own employees? They hire a freelancer, of course. That's how salvage operator Gwynne Heikki finds herself returning to the backwater planet where where she spent her childhood on a mission to find and return a lost cargo. The job had its complications—the cargo locators failed in the crash, the wilderness areas swarmed with dangerous animals, and the worse of them were of almost human intelligence—but nothing that would stop her from rejoining her lover once the job was finished. But there were a few problems that the company didn't tell them about… It was almost as if her employers wanted her to fail — and to die in the process.

This wasn't my first novel with queer characters, but it was my first book with a lesbian protagonist, and a lesbian in a happy relationship, for that matter. When it came out (almost 30 years ago!) that overshadowed the story; now it's much easier for me to see it for what it is, a far future adventure with exotic technology that happens to have a queer woman as its protagonist. What does the world look like when "queer" is not a contested category? It's still worth looking at that today. – Melissa Scott

The next article was culled from an unfamiliar source, the Terentine Argus of Precinct Six, with a screaming headline, Local Business Under Siege from Off-world Magnate; Insiders Baffled. Heikki stared for a moment at the glaring type, wondering what had possessed the compiler to slip this piece of trash into her file, and then saw the first line of the story. Local salvage proprietors FourSquare confirmed today that they are the object of a breach-of-contract suit by the Iadara-based crysticulture firm Lo-Moth, following FourSquare's refusal to complete its search for the LTA craft lost on Iadara eight months ago.

Heikki's eyebrows rose. Salvage proprietors did not break contract even with mid-rank firms like Lo-Moth; or rather, she amended grimly, one broke a contract in the full knowledge that one was also breaking one's career and company. Something must have gone very wrong, to force FourSquare to give up like that.… She skimmed quickly through the article, but it said nothing more about the reasons for the breach, concentrating instead on the suit and the possible legal consequences for FourSquare. The dateline on the article was nearly two weeks old.

The final flimsysheet was less than half full, and contained only a single entry. Lo-Moth of Iadara announced today the settlement of its dispute with FourSquare, salvage proprietors, Terentia, in exchange for all data collected by FourSquare during the term of its employment. Lo-Moth is presently accepting bids (licensed proprietors only) for completion of the project abandoned by FourSquare.

"Holy shit," Heikki said aloud, and winced as the red light flashed above the orderpad. A moment later, numbers streamed across the little screen: the Club's monitor program assessed a fine of ten poa for immodest language. Heikki made a face, but pressed the acknowledgement button silently.

Heikki looked up slowly, allowing herself a slight, lopsided smile. Piers Xiang and Odde Engels, known without much fondness as the Siamese twins, smiled down at her, the expression particularly at odds with Engels' hard-edged blondness.

"What's up?" she said in return, and did not offer them a chair.

To her surprise, however, the two men lingered, Xiang's green eyes flickering sideways in what might have been a reproving glance. "I see you've seen the news," he said, in the clipped Havenite accent he'd never been able to erase.

"About Lo-Moth." Xiang paused, round face suddenly serious. "May we join you, Heikki?"

Exchange point etiquette required that she say yes—though 'pointer etiquette also decreed that the question should never have been asked. Heikki hid her annoyance, and gestured to the chairs that stood opposite. "Make free."

"We heard you spent time on Iadara," Engels said. He did not reach for the orderpad, and Heikki did not offer it to him.

"Staa, Eng." Xiang murmured. To Heikki, he said, "I assume you and the Marshallin will be bidding?"

"I only just heard about the opening," Heikki said. "We haven't spoken."

"It is, from all accounts, an excellent opportunity," Xiang said.

Heikki hid a sigh, recognizing both the ploy and her own imminent capitulation. "I haven't seen much about the job, " she said aloud, "but Iadara, now. It's an interesting planet."

Xiang leaned forward a little, folding his hands neatly on the tabletop. In that position, he looked rather like a young and somewhat naive monk of some ascetic sect. Heikki, who had seen the act before, eyed him with concealed dislike. "Lo-Moth lost a lighter-than-air craft that was carrying some important research cargo, on a flight over the—I gather unsettled—interior. The locator beam went off the air, and the crash beacon did not fire. Lo-Moth is, not unreasonably, curious."

Heikki leaned back in her chair, her dislike of the Twins fading in the face of an interesting problem. "Crashed in the interior? And a research cargo—so it probably went down in the 'wayback. The weather's very bad there, there's a central massif that sets up a bad storm pattern during the planetary autumn. The storms have been known to—" She caught herself before the monitor could respond, substituted a more modest word. "—interfere with beam transmissions before now. But of course, that wouldn't explain the beacon. I take it no one's walked out?"

Engels shook his head silently. Xiang said, "I understand they don't expect anyone to do so."

"They wouldn't," Heikki said, and allowed herself a grin. "There's an indigenous primate, nasty job, semi-bipedal and tool-using—probably well on its way to intelligence. They're fairly territorial, the orcs, and they find humans a pleasant addition to their diet."

Heikki spread her hands, opening her eyes wide in innocence. "Oath-true, Eng. The Firsters—the first settlers—were just lucky they landed in the Lowlands. The orcs don't come down there."

Engels frowned, and Xiang touched his shoulder. The blond man settled back in his chair, lips closed tight over whatever it was he had been going to say.

"Still," Heikki went on, the mockery fading from her voice, "orcs and bad weather—that shouldn't be enough to make pros break contract. Who is FourSquare, anyway?"

Xiang shrugged. "I don't know the company, myself. They were—still are, I suppose—licensed in all the proper ways, so…"

Heikki nodded thoughtfully, as much to herself as to the Twins. Something had gone very wrong on Iadara, that much was obvious—something political, possibly; companies had been paid to break contract before now; maybe something technical that wasn't being reported for fear of scaring off other companies that might bid for the job. Almost without wishing it, she found herself adding up the costs of the job, framing an acceptable bid.

"Then you will be bidding?" Xiang asked softly.

Heikki allowed herself a rather wry smile. "I'll have to talk it over with Santerese, of course. But it does sound like an interesting problem."

Xiang returned a crooked smile. "And also a difficult one," he said, without much hope. Heikki's smile broadened, and Xiang sighed. "Which is, of course, what makes it interesting."

"Precisely," Heikki agreed, and wished they would go away.

Engels' eyes narrowed as though he'd read the thought, and he leaned forward a little, as though he wanted to prolong the conversation out of sheer perversity. To Heikki's relief, however, Xiang rose gracefully, shaking his head at Engels. "It was good to see you again, Heikki," he said aloud. 'I'm sorry to rush, but we have to catch a train."

"Nice talking to you," Heikki said, to their retreating backs, and knew Engels, at least, heard the patent insincerity in her voice.