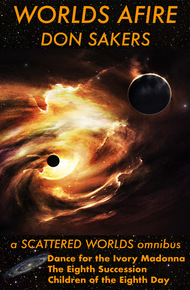 Don Sakers was launched the same month as Sputnik One, so it was perhaps inevitable that he should become a science fiction writer. A Navy brat by birth, he spent his childhood in such far-off lands as Japan, Scotland, Hawaii, and California. In California, rather like a latter-day Mowgli, he was raised by dogs.

As a writer and editor, he has explored the thoughts of sapient trees (The Leaves of October), brought ghosts to life (Carmen Miranda's Ghost is Haunting Space Station Three), and beaten the "Cold Equations" scenario ("The Cold Solution," Analog 7/91, voted best short story of the year.) He's best known for his Scattered Worlds space opera series. Don is also the book reviewer for Analog Science Fiction & Fact, where he writes the "Reference Library" column in every issue. Don lives at Meerkat Meade in suburban Baltimore with his spouse, costumer Thomas Atkinson. Having recently retired from 42 years with the local public library, he is hard at work becoming a starving writer.

Beyond sexuality and gender, beyond race and class, beyond nation and even world, there is the Nexus: a creative, unconventional alliance devoted to creating a future of difference and diversity. A future where queer sensibility extends to all areas of life. A meta-queer future.

This set includes three novels—a near-future cyber-thriller and two linked space operas—set in the meta-queer universe of the Scattered Worlds. Titles included: Dance for the Ivory Madonna, The Eighth Succession, Children of the Eighth Day.

I met Don at one of the very first gay fandom panels at Noreascon back in the '80s, and have followed his career eagerly every since. This omnibus offers three complete novels in Sakers' sprawling Scattered Worlds future, beginning with its origins in Dance For the Ivory Madonna and moving on through two linked novels of the Hoister family, cloned paranormal geniuses. This is grand Golden Age space opera reworked by queer imagination, satisfying on every level. – Melissa Scott

Jackie Paper enters, snags a piece of cake and drops into a chair. Elbows on the table, he smiles at Omi. "You rang?"

"Cousin Matilda may be heading for Fort Shepard soon. What would you think of going along with her?"

Omi faces Miranda. "Jackie needs to get out of the Confederacy before long. You'll both be safer if you travel together."

"Jackie…I know what happened at the mall last week."

He turns his head away. "That was nothing serious. Those punks were looking for a fight. I was just in the wrong place—"

"Precisely." Omi steeples her fingers and regards him over impeccable, polished nails. "You're in the wrong place. Jackie, we've talked about this before. While you were younger, it didn't matter—there's nothing unusual about a teenager picking up spare change hustling truckers, and it gave you a perfect excuse to keep crossing into the international zone. But you're getting too old now. You need to get out of God's Country before you're—"

"Omi, I think you're overreacting. A little fight at the mall, a few bruises, that's all."

She takes his hand. "Jackie, it's not going to stop with a few bruises." A frown. "You remember that pair of schoolteachers they burnt in '38. It could happen again, all too easily."

Omi gestures to Jackie. "Tell her."

Looking down at the table, Jackie mumbles, "It was the gym teacher and the science teacher at my high school. Two women. They were…um…living together, for years. You know, they were….."

"Yeah. When the PTA found out, there was this big town meeting, right down there on the football field. They brought the teachers out, and the preacher prayed over 'em, and then…they burned 'em." His voice is wooden, emotionless. "Choir sang hymns the whole time. Preacher sayin' how this was the Lord's work, we should be proud of ourselves."

Omi scowls. "All the kids' clothes reeked of smoke, for weeks after, no matter how much they were washed. I had to throw out half a dozen shirts."

Jackie, still looking down, says, "I still don't see the point to leaving. If the Lord wants you, He's gonna get you, no matter where you are."

Miranda takes a deep breath. Where to start, with a child who's been indoctrinated since birth in the beliefs of a sick society? "Jackie, the Lord does not hate you and is not going to get you. Look at me."

He raises his head, meeting her steady gaze.

"Where I live, nobody gets burned at the stake, ever. Who you love, and how, is a matter for you and the people involved, that's all." He looks at her intensely; she holds his stare, hoping he sees truth in her eyes. "Two of my dearest friends, George and Phil, celebrated their fiftieth anniversary a few years ago. They're the most stable couple of any of my friends."

Miranda fishes in her pocket, takes out a datacard, and taps its face. Images, flat and holo, race across the screen. She holds it up for Jackie to see. "Here's them at their anniversary party. And this is them on their honeymoon." She clicks through picture after picture. "Here's a lesbian couple who write high fantasy bestsellers. This fella's an actor, he's in a triad with two other men." Figure follows figure, all of Miranda's friends. "She's gay. So's he. And him. These two are sisters, both gay. Andy and David here are a perfect couple. That's Karen and Robin and their entourage; nobody's sure what their story is. Here's Selma, she used to be a straight man but now she's a lesbian. Dale's an intersexual whose parents kept the doctors from doing reconstructive surgery. Maline's a Frozen Zoner—she's had her erogenous zones deadened so she can stay celibate." She lowers the card. "If they start burning people where I live, there'll be a long line before they get to you, kid."

"It's decided, then," Miranda says. "You come with me at least as far as Fort Shepard. Then, if you can't find any other place you're happy, you can come live at the Institute."

Two days later, Miranda and Jackie crouch in the shadow of scraggly shrubs at the edge of a windy plain, looking northwest. A three-meter-tall fence of barbed wire slices across the plain, perhaps a hundred meters from where they stand; beyond the fence, and another hundred meters further on, a cluster of low, concrete buildings marks the outskirts of Fort Shepard. Beyond, the town of Laramie recedes over the horizon.

Two hundred meters from freedom. Despite late-afternoon sun slanting through a nearly-cloudless sky, the wind is winter-bitter, like ice on Miranda's exposed hands and face. She thinks, with regret, of the coat she left behind at the Institute—tissue-cultured black mink, heated and with matching gloves and hat; all by itself, it would keep out the chill of an Antarctic winter. Instead, here she is wearing a wrap that's little more than a glorified blanket, and to top it off, the nunn thing has Christian crosses embroidered all over it.

She turns to Jackie, shivering in his own blue windbreaker. His cheeks are bright pink, and his breath emerges in clouds. Burdened with a backpack that contains all of his worldly possessions, plus most of Miranda's luggage, he looks frail as any bird.

"Here," she says, spreading her wrap. He stands against her and she closes it, feeling like a mother bluejay enfolding her chicks.

A siren blares, followed by an obviously-artificial voice announcing, "T minus five minutes and counting. Please clear the area."

Miranda stands, allowing Jackie to assist her. She scans the fence, and sees a rainbow pennant hanging almost directly across from their position. "Okay, let's go. Head for that rainbow flag." Superstitious Christian soldiers will not dare to be outside during a rocket liftoff.

It takes almost all of the five minutes to reach the fence, and by the time they do, Miranda is no longer chilly. She stands, panting, while Jackie produces a pair of wire cutters from his jacket. He begins snipping fence links, then stops as the siren sounds again and the voice counts down to zero.

The fence shakes and the ground quivers, as a great wall of sound hits Miranda and Jackie broadside. Less than a quarter-kilometer away, fire erupts and a squat rocket rises, slowly at first, then with ever-increasing speed. The blast of air that washes over them is perceptibly warm, like a lowland summer breeze gone astray.

Even before the roar fades to where Miranda and Jackie could hear each other speak, Jackie is at work again on the links. He is helped by the fact that every other link is already severed. Jackie is not the first to follow this path to freedom; the rainbow flag marks the spot where sympathetic souls have prepared the fence. In another minute, he is through—there remains only a scramble across the no-man's-land on the U.S. side, and they are beyond the reach of the Army of God.

Jackie paces, wiping the last remnants of fingerprint ink from his fingertips. Miranda takes a battered data tablet from a stack and screens through Time Magazine. Worldwide infrastructure failures figure into many of the stories: a three-day shutdown of public transit in Pristina, leading to a no-confidence vote in the parliament and the collapse of the coalition government; crisis in Amman when shipments of meat marked as Argentine beef were discovered to contain up to 50% processed pork; thousands of liters of raw sewage accidentally discharged into waters off Dubrovnik beaches. A Global Climate Council report that Australian carbon dioxide emissions were up 2% over the previous quarter. A comsat tumbled out of control over Baluchistan, straining already-jammed circuits through most of the subcontinent.

"Good afternoon." The middle-aged man who enters, dressed in a conservative business suit, has blond hair and a handlebar mustache. Gold-rimmed RCSpex balance on his nose, casting a shadow across his eyes. He holds his hand out to Jackie, then to Miranda. "I'm Dillon Blair, United States Immigration. Welcome to the States, Mr.…er…Paper. I need to ask you a few questions." He sets a small recorder on the table before Jackie. "I'll be recording your answers. Do you understand?"

"Good." Blair raises his head slightly to the right, looking into a window of data that only he can see. "You are a citizen of the Confederacy of Christian States of America, currently going by the name 'Jackie Paper,' with Baptismal Registration Number 40-885-3703?"

"Have you reached your eighteenth birthday?"

"Do you affirm that you have entered the United States of your own free will, and that you seek sanctuary from persecution in your own country?"

"Is it your intention to stay in the United States and work toward becoming a productive citizen?"

Blair bends and kisses Jackie on both cheeks. "Congratulations. You are now registered as a legal resident alien under the Gittings-Rowland Asylum Act of 2023." He clicks off the recorder. "The Gay Servicemember's Organization has an office down the hall. They'll help you get settled, and assist you any way they can."