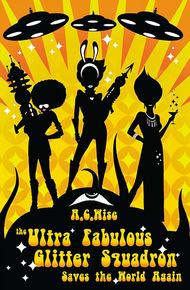 When the world is endangered, there's no point in sparing the spangles, spilling the drinks, or withholding the glitter. The Ultra Fabulous Glitter Squadron Saves the World Again is a collection of inter-connected short stories featuring a group of fierce women kicking ass and keeping humanity safe from supernatural terrors all while looking incredible in sparkles and high heels.

From the title alone, you'd expect a fun and flamboyantly fabulous take on superhero clichés, and you get that, but so much more. The squadron itself is a group of women from all along the spectrum of gender and sexuality, who've come together to embrace the glitter—and the power—of drag. Wise moves smoothly between grand adventure (and grand Guignol) and the very real lives of the squadron members, creating superheroes who are also complicated, believable people who never relinquish their fabulosity. Beautifully written and structured, this apparent airy confection, like its heroes, has real power behind it. – Melissa Scott

But the Ultra Fabulous Glitter Squadron will have to do. At least one of them self-identifies as male, Butch in all his spangled glory. He tucks proudly, or sometimes not at all, and fuck you very much if you don't like it.

By night, they work at clubs with names like Diamond Lil's, the Lil' Diamond, and Exclusively Lime Green. Every Thursday, they bowl. In-between, when they're not bowling, or dancing, or singing on stage, they kick ass harder than you've seen ass kicked before. And they do it all in silver lamé and high heels.

This is Bunny, their leader, born Phillip Howard Craft the Third. At the moment, she is up in the recruiter's face, waving a poster of Uncle Sam under the aforementioned tagline, a floating head against a backdrop of Martian red. Her nails are manicured perfection, each painted a different metallic shade, all the colors of the rainbow, and then some. Her hair is piled in a frosted bouffant so high it barely fit through the recruiter's door. Despite the anger written in every line of her body, she doesn't raise her voice.

"Your sign says you need volunteers. We're volunteering, and since I don't see your waiting room clogged with other candidates, dare I suggest: We're all you've got."

"I can't…I won't…" The recruiter turns bright red. He takes a deep breath, faces Bunny, and almost, but not quite, manages to look her in the eye.

Bunny's eyes, tinted violet today, shine cold steel. They stop the words in the recruiter's throat, hard enough that he looks like he might actually choke. Her tone matches her eyes.

"Think carefully, General. If the next word out of your mouth is anything but 'civilians' I will dismember you myself. You won't live long enough to worry about an invasion from Mars."

The General's jaw tightens. A vein in his forehead bulges.

"The Glitter Squadron's record speaks for itself, General." Bunny's voice is level. She places the poster on his desk. "Cleaner than yours, I'll dare say. And," Bunny smirks, and points to the General's medals, "our bling is better."

Rage twists the General's features, but his shoulders slump all the same.

"Fine," he says. "The damned mission is yours. Add a little more red to the planet, if you want it so badly."

Bunny smiles, teeth gleaming diamond bright. "I promise you, General, the Ultra Fabulous Glitter Squadron is more than up to the task."

They are loaded into a rocket by clean-cut scientists with white coats and strong values, men and women who believe glitter is for little girls' birthday cards as long as they're under six years old, and leather is for wallets and briefcases.

"Some people have no imagination," Starlight stage-whispers as they climb the gangplank. Starlight was born Walter Adams Kennett. Her mirror-ball inspired outfit forces the good, moral scientists to look away as light breaks against her and scatters throughout the room.

Starlight pauses at the airlock door, looking up at the floodlit rocket, all sleek length, studded with rounded windows, and tipped at the base in fins. "Well, maybe not no imagination." And she climbs aboard.

Bunny reads over a brief as they hurtle between the stars.

"Imagine the outfit I could make from one of those," Starlight whispers, pointing to the stars pricking the vast dark.

"Our target is Doctor Blood," Bunny says, rolling her eyes.

She flips a page in the neatly-stapled file, scans, while the twelve other bodies crammed into the rocket lean forward in anticipation.

"The least they could have done was give us champagne. We are off to save the world, after all. And this seating…"

No one answers Starlight this time. She's young; they hear the nerves in her voice, and excuse her incessant giggling and talking. Today, they are twelve; they are together and strong, operating like a smoothly oiled machine. But they have all at various times been afraid and alone, less perfect than they are now. And they will be again. Their numbers may fluctuate, members coming and going, but always they are this: The Glitter Squadron. And they are fabulous.

For this mission, they've chosen strictly retro-future, which means skin-tight silver, boots that come nearer to the knee than their skirts, bubble-barreled ray-guns, frosted white lipstick and, of course, big hair. CeCe the Velvet Underground Drag King called in sick with the flu, so it's lamé all the way.

Each member of the Squadron has added their own touch, as usual. Starlight's peek-a-boo cutout dress, which is really more skin than fabric, is studded with mirrors. Esmerelda wears a wide belt, with faux gems, green to match her name. Bunny is wearing her namesake animal's ears, peeking out from her enormous coif.

M is the only exception to all the brightness and dazzle. M wears leather, head-to-toe. Think Michelle Pfeiffer as Catwoman - erratic, angry stitches joining found leather so close to the body there's no chance for the flesh underneath to breathe. Only it isn't like that at all. There is a whip hanging at M's side, and plenty of other toys as well. Only eyes and lips show through M's mask, and their gender is indeterminate. No one knows M's birth name, and it will stay that way.

"He caught his wife cheating with his lab partner, or his brother, or his best friend. He tried to burn them to death, or blow them up, or turn them into evil monkey robots, and horribly disfigured himself in the process. So he did the only sensible thing, and shot himself into space where he built a gigantic impenetrable fortress on Mars. Now, he's threatening to invade earth, or shoot it to pieces with a space laser if the United Nations doesn't surrender all of earth's gold."

"Can they do that?" Esmerelda asks.

Starlight mutters, "No imagination at all," and shakes her head, sending bits of light whirling around the rocket.

"That's where we come in," Bunny says. "We take down Doctor Blood, easy peasy lemon squeezy, and we're home in time for tea."

"Ooh, make mine with brandy!" Starlight says. Someone elbows her in the tight space, and she falls silent.