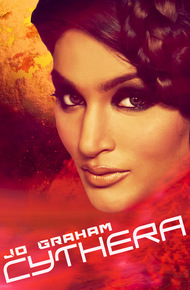 Jo Graham worked in politics for fifteen years before leaving to write full time. She is the author of the Locus Award nominated Black Ships and the Spectrum Award nominated Stealing Fire as well as seven books of the top selling Stargate Atlantis: Legacy series. She is also the author of the series The General's Mistress, The Emperor's Agent and The Marshal's Lover, which mix history, magic, and spy adventures. She has also written two interactive novels with a third due in 2021, and two books on pagan spirituality. She has a space opera, Sounding Dark, forthcoming in 2021.

Cythera is a sacred courtesan, one of the fabulous Adepts of Menaechmi, famed through the Nine Worlds for their opulent beauty and decadence. However, when a fragile peace treaty hangs in the balance, the power to stop an interstellar war suddenly rests with her – a mission for which she is unprepared and unqualified. If she is to save thousands of lives, Cythera must not only rely on her wits and sensuality, but on a man she never thought she'd see again who has haunted her dreams for seven years.

Athain Kinslayer is a captain in the Calpurnian navy, a star voyager who has given up on personal happiness in pursuit of his duty. His job is to stop a war. The last thing he expects is to have to rely on a sacred courtesan, a woman with whom he spent one unforgettable night seven years ago and has never been able to forget. Together they must undertake a dangerous journey, face unexpected enemies, and delve into the deep and sensual waters of the most hidden rites in order to save their worlds – and find each other.

Sexy space opera with unexpected depths. Cythera is a sacred courtesan, and there's no closing of bedroom doors here. When she is asked to join a former client on a high-stakes mission to prevent an interstellar war, she realizes that her hard-won skills hold the key to bringing peace—if she can stay alive long enough to use them. Steamy sex and strongly-plotted adventure let Graham explore a future of complex, fluid sexualities and a culture that takes pleasure as a good. – Melissa Scott

"Prepare for reversion." Athain's voice was distorted but plain. At least she did not have to try to work through the jumps, though it did make them seem to pass quicker. Only a few seconds now…

And then they were done. The pressure eased, distortion ceasing. Cythera opened her eyes, letting out her breath in a long, calming exhale. The jump was over. They were in an uninhabited system where they would pass the scheduled twenty-one hours until their next optimal jump time. She would brief Hereu, and then perhaps Athain might be free for dinner….

A sudden crashing shock hit the ship, a pounding thud that shook her to the core. If Cythera had not been strapped in she would have been thrown across the room. The lights flickered, then came back up. Alarms shrieked. Through their din she heard the sound that sent a jolt of pure terror through her — the ventilation system sealing. Somewhere, there was a hull breach. Compartments were sealing to preserve atmosphere wherever possible.

Cythera did not scream. There was no one to hear her. She did not fumble at the straps in pure panic. The worst possible thing she could do would be to unstrap so that any unexpected movement of the ship would fling her around breaking bones. Nor did she reach for the call button for the crew. The starcrew would have more important things to do this moment than deal with passengers who were safe and uninjured.

What had happened? Had they hit something? As astronomically unlikely as it might be, some stray asteroid or comet that had never been charted might be in exactly the wrong place, though with literally millions of miles of space the chances of accidentally running into it were incredibly unlikely.

The screen had gone black, and now it came back to life. Rebooted, no doubt, and going to its default view, the exterior camera. It showed nothing but distant stars. There was a mist before them.

Cythera felt a chill run down her spine. That was a thing star travelers feared the most. That mist was Void Dancer venting atmosphere or liquids, bleeding out into vacuum.

The cry of the alarms changed, not the universal blare to abandon ship that she had feared, but the shrill shriek that was battlestations.

A shape moved against the stars. A black leviathan moved in the darkness just at the edge of the camera's view, eclipsing distant lights as it turned and disappeared from sight, circling around Void Dancer.

The ship shook again. There was the rumble of distant thrusters, and then a new, unfamiliar sound. A lateral thruster? What was Athain doing? Then she realized it was the forward missile tube. Void Dancer was returning fire.

There was a streak of fire against the blackness, the missile's propulsion streak bright as it tore away. And then another, further down, the aft missile tube on the same side.

A terse voice over the screen, a woman's rather than Athian. "All passengers remain in their cabins. Remain strapped in."

Another shake, another flicker. Cythera gritted her teeth. If she could only see!

Fire blossomed against the night, an incoming missile coming straight for the camera….

The shock would have thrown her to the ground had she been standing. As it was, it rattled her teeth. For a long moment Cythera thought they'd taken another hit, one to the vitals. But no, it was the familiar disorientation of a jump. Almost as soon as she thought it, it was over. A micro jump of a second or two — Athain had done that before, she thought suddenly. He'd microjumped blind before while venting atmosphere. But what other way was there out of an ambush, for surely that's what it had been? Someone had been waiting for them to emerge, had fired on them the moment they came out of the jump before they could even scan their surroundings.

How badly damaged were they? And where were they?

The starfield shown by the camera gave her nothing. All it showed was ubiquitous, distant space.