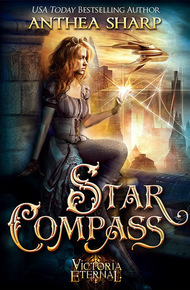 Charles Dickens meets Firefly in this tale of an orphan destined for the stars.

Steampunk with a twist! Enter a fantastical world filled with alien spacecraft and Victorian sensibilities, ball gowns and travel to the stars - where a pickpocket with a particular gift makes the journey from the gutter to the stars…

Several years ago, I was challenged to write an alternate history short story using a time period I knew well. My previous research into the Victorian era (for the historical romances I write as Anthea Lawson) made the mid-1800s the perfect choice. But what kind of alternate history twist could I use? I finally hit upon aliens landing on the lawns of Buckingham Palace in 1850 and cloning the queen. Thus, the Victoria Eternal universe was born. Star Compass is the first full-length novel in this alt-history world, and is a StoryBundle exclusive! – Anthea Sharp

Diana Smythe stared out the window of the family carriage and thumped the back of her heels against the leather seat, timing the beats to alternate with the clop of the horses' hooves. She didn't want to go visit the Duchess of Penderly, even if the old lady was Papa's great-aunt or somesuch. She'd much rather stay home and play with her new puppy.

The puppy was small, but Nanny told her he was going to grow into a big dog, so Diana had named him Jupiter, after the largest planet. Maybe he'd even be big enough for her to ride on. And once he was grown, maybe he could even be modded with wings, and they could fly off on adventures together up into the stars.

As the carriage rolled through the streets of London, Diana kept boredom away by watching the horse-drawn cabs and steam-powered vehicles, calculating their speeds and trajectories in her mind. Pedestrians eddied along the sidewalks, and she added them in, too, plus the random dartings of pigeons over the rooftops.

It was a lively scene, full of lines of movement and parabolic arcs she could almost see drawn across the air. Every sudden stop or acceleration changed the dynamics, and she tried to make predictions. Would the hansom cab or the omnibus reach the crossing first? Would a bird dart to the near side of the street, or the far one? Would that lady with a parasol pass the nurse pushing a pram by the time they reached the apothecary shop?

Whenever she spoke about such things, she was either patted on the head or called a very odd little girl. Only once had anyone looked at her like she made sense, and that had been Uncle Xavier. Last year, when she was only seven, he'd insisted on a maths tutor for Diana, although she was the youngest and her older siblings had no such thing.

Papa had sighed and shook his head, but within a week a tutor had arrived. Mr. Tamms had proclaimed himself astonished at her mathematical talent, and soon enough Diana was learning trigonometry and was allowed to do as many sums as she pleased.

Not today, though. After breakfast, Nanny had dressed her in her new frock, the one with the shiny buttons, and told her she was going on an important visit. Diana, engrossed with counting the facets on the crystalline buttons, had scarcely listened, even as Nanny bundled her, along with her brother and sister, into the carriage.

"Here's a sweet." Nanny had slipped a horehound candy into Diana's hand. "Now behave, young miss, and when you come home you'll be able to tumble about with Jupiter to your heart's content."

Diana knew better than to complain, so she'd taken the candy and settled on the far end of the seat. Peter and Claudia squished in next to her, and in a few moments Mama and Papa entered the carriage and sat opposite their children. Diana peeked at them from beneath the brim of her hat.

In truth, she was a little afraid of the elegant, distant creatures who were her parents. She did not see much of Mama, and even less of Papa, although she supposed that would change as she grew up. Claudia had just turned ten, and was deemed old enough to begin taking her meals in the formal dining room with their parents, as Peter had done for the past two years. Diana felt a bit abandoned in the nursery with only Nanny for company during supper.

But there were always her old friends, the numbers and the trajectories. Nanny didn't know why Diana liked to roll her balls back and forth in the playroom, calculating when to push a smaller one out in order to collide with, or avoid, the others. But Mr. Tamms understood.

Best of all, she now had Jupiter—a constant lesson in speed and motion. Plus he covered her in sloppy puppy kisses and slept at the foot of her bed.

"Are you certain the duchess will aid us?" Mama turned to Papa, a note of concern in her sweet voice. "She is such a distant relative, after all…"

"Don't fret, my darling. Once she sees the children, and understands our predicament, I'm certain everything will turn out for the best."

Diana hardly listened to her parents. Most of her attention was taken up by watching the thick plume of steam trailing from a large omnibus clattering down the street toward them. Her parents would never dream of taking public transport about London. That was for the working class, not nobility like themselves.

Still, it looked like great fun to ride about so quickly in a vehicle powered by steam and gears. The omnibus was going at quite a clip; certainly faster than Jupiter could run.

Diana undid the latches and lowered the window a bit, leaning out slightly so she could taste the air as the omnibus swept past.

Something was wrong, though. The lines of travel weren't parallel. For a moment her lungs squeezed so tight she could barely breathe. It was like watching two of her balls meant to zip past one another instead wobble into a collision course.

"Mama?" she asked in a small voice.

"But what about the debts?" Mama did not hear her, and continued speaking to Papa. "Do you truly think she will agree to cover them?"

Mama's words were obliterated by the blast of the omnibus's horn.

It was coming too fast.

There was a horrible crunch and the carriage spun sickeningly about. Diana screamed as they turned and tilted. She felt herself slipping out the window, and tried to grab on to something—anything—but her scrabbling fingers could find no purchase.

"Diana!" Papa bellowed as she was flung out of the coach.

She tried to tuck her head down, to make herself into a little ball so she would not break her arm the way she had when she'd fallen out of the apple tree last summer. The air was full of the screech of metal, and people screaming.

Then a bigger crash, that sounded like the sky was breaking. A flash of light and heat, and a whump that vibrated through Diana's chest.

Her head collided with something, and everything went away into the black.