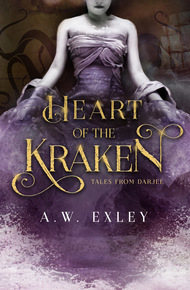 Books and writing have always been an enormous part of Anita's life. She survived school by hiding out in the library, with several thousand fictional characters for company. At university, she overcame the boredom of studying accountancy by squeezing in Egyptology papers and learning to read hieroglyphics.

Heart of the Kraken by A.W. Exley

Legend says if you consume the heart of a mermaid, you will know all of a man's secrets

Ailin doesn't care if the legend is true or not - she's stuck in a crate on her way to feature as the main course at a lavish banquet. Her heart to be served while still beating for a cruel noble while the rest of her is sliced into sashimi. Unless she can escape.

Across the ocean, Fenton longs for a different release. Sold as a child by men who labelled him a mistake, a failed experiment. Except he has one valuable skill, he can summon the dreaded kraken. Bought by a pirate, he has only known life at sea, wielded as a tool by the captain.

Two lives collide when the pirates capture the vessel holding Ailin. The kraken holds the key to Ailin's freedom but in summoning the beast one last time, Fenton must choose between losing his life or his heart…

As you might expect from the title, AW Exley's contribution features adventures at sea, pirates, a mermaid, and – of course – the dreaded Kraken! AW's love of fairy tales is evident in this elegantly drawn exploration of finding and accepting one's true self. – Anthea Sharp

The Razor's Edge drifted with the ebb and flow of the Sanguine Ocean. The light wind crafted small peaks that slapped against the hull with a regular beat. Seagulls circled and dove into the slow wake, looking for scraps thrown from the galley. Not a single cloud obscured the pure blue sky and the harsh sun beat down without any filter. The crew sought what little shade the sides of the vessel offered. There was never any down time on a pirate ship. Life revolved around maintenance and a myriad of tasks, occasionally interrupted by the jostle of action.

Today, several crew sat to one side of the deck to perform quiet, mundane duties. Some men mended nets, a few polished the brass fittings until they shone and the mechanic undertook routine maintenance. While the vessel appeared to be lazing in the sun, she was really a predator scanning the horizon. Like a tiger who crouched in the jungle, waiting for the rustle of vegetation to give away its prey, so the crew waited for any sign of another ship.

In order to creep up unseen and unheard on their target the Razor's Edge ran by sail. Their engine slumbered below deck. Even the fires were dampened so as not to emit a tell tail puff of smoke. The oceans provided rich pickings for vigilant pirates. Steam powered merchant vessels plied the water, their holds laden with cargos from other lands and provinces. The trick was to find one to plunder before a Regulator airship spotted you and dropped from above like a vulture. Regulators were lawmen who patrolled sea and land, but they were often little better than sanctioned pirates, stealing in the name of taxes and fines.

Fenton sat at the peripheral edge of the group of sailors. The others swapped crude jokes but he didn't join in, preferring to let the conversation wash over him. With long fingers, he ran a whetstone over his sword, honing the edge to razor sharp. These quiet moments gave him time to contemplate his life. With each day that passed, he loathed the path he sailed just a fraction more. He preferred the chaos of battle with no time to think, only to react. Kill or be killed and each time he wondered why did he bother to raise his sword?

Dying should be easy but he couldn't do it. Was it ego and a tiny desire for his life to have some meaning before he threw it away? Once he slipped from the earth, there was no one to mourn him or comment on his passing. The crew would divvy up his scant belongings and promptly forget him. Perhaps he could face eternal sleep if he had something worth dying for?

He had no name other than Fenton and didn't know if it was his first name or last. The day the captain purchased him as a lad, he bestowed those two syllables upon him and never any more. Fenton had no memory of his life before, only of the captain checking his teeth, looking behind his ears and muttering, I'll take him. Ever since, he had lived his life on board and rarely ventured onto land. Fate and his nature separated him from other men and the life on shore that filled their dreams. His dreams were cold and empty, like his soul.

When he trod the earth, his stomach churned with the same nausea that afflicted some men at sea. The fates anchored him to the ocean and the ferromancers of Darjee chained him to Captain Dragut Reis. His freedom would come with death, there was no other way to break his bond. Except death eluded him, even if he had the courage to reach for it. He was too valuable a tool for Captain Reis to ever let misfortune befall him.

He laboured alongside the other men, but called none his friends. Their eyes held distrust and fear. Not because he was one of the largest or strongest men of the crew. They feared him because of what he could summon. Circumstances beyond his control made him the captain's pet and the others hated him for it. He raised his sword arm in their service for years and they still whispered about him behind his back. He huffed back a laugh, he would trade his lot for their normal lives in a heartbeat, but none would chose to be shackled to the demon that ruled Fenton's life.