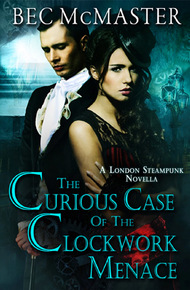 BEC MCMASTER grew up on a steady diet of '80s fantasy movies like Ladyhawke, Labyrinth, and The Princess Bride, and loves creating epic, fantasy-based romances with heroes and heroines who must defeat all the odds to have their HEA. She lives in Australia with her very own hero, where she can be found creating the dark and dangerous worlds of the London Steampunk, Dark Arts, Legends of The Storm, or Burned Lands series, where even the darkest hero can find love. Read more at: www.becmcmaster.com

The Curious Case Of The Clockwork Menace by Bec McMaster

Friends, partners, and professionals. So just why is this case coming between them?

In a Victorian London ruled by the blood-drinking elite, Perry Lowell is a logical and accomplished Nighthawk: a rogue blue blood who tracks murderers and thieves for the Guild. So when she and her charming-but-reckless partner, Garrett, are charged with finding a missing theatre starlet, it should be a simple solve.

But with an entire theatre of suspects, including a flirtatious understudy and whispers of a Clockwork Menace haunting the place, tension is brewing between the pair of them. Can they come together to solve the case—or will it be too late, when the murderer turns his attention on Perry herself?

Award-winning author Bec McMaster brings us a bite of her fabulous London Steampunk series in a tale that blends elements of mystery, romance, and the paranormal. If you like The Curious Case of the Clockwork Menace, you're in luck – there are five other books in the series for you to scoop up and enjoy! – Anthea Sharp

Masculine laughter echoed through the hotel door, followed by a distinctly feminine giggle. Perry Lowell grimaced as the elevation chamber doors closed behind her at the Charing Cross Hotel. She could hear a faint murmur now; words she couldn't quite make out—and was grateful not to.

She rapped her knuckles against the door. The laughter froze, a listening quality echoing through the stillness. "If it's housekeeping... then we're not at home to visitors."

"Get your backside out of bed, Garrett," she shot back. "It's Perry."

That brought about a flurry of movement inside. "Give me a moment."

"Oh, stay love. Tell them to go away, and stay with me," the woman cooed, as the sound of bare feet padded on the floorboards within.

"Business, I'm afraid." His smooth voice hinted at a smile and Perry could just imagine what was going on behind the door—Garrett snatching at his clothes as he winked, and made smooth promises to the friendly widow he'd been cultivating. She'd seen it all before. Women loved Garrett, and he loved women.

Perry stepped away, and peered through the window in the hallway, giving him the illusion of privacy. Or perhaps not wanting to hear those whispered love words, and promises he'd no doubt break.

Garrett had been her partner for nearly six years, after she'd arrived at the Guild of Nighthawks one night, soaked to the bone, and shivering with the dark hungers of the craving virus. Her first few months as a blue blood had been horrendous as she struggled to rein in her bloodlusts as her body slowly changed; becoming leaner, faster, stronger, and hungrier. Not for food though. Only blood.

The door jerked open and Garrett appeared, his shirt still half unbuttoned and a bite mark on his neck. Perry caught a glimpse of the plump widow who wore nothing more than the froth of sheets in the middle of the bed. An ice bucket housed an open bottle of champagne by the smell of it, and sheer, gauzy lace fluttered over an open window, beneath red, swagged drapes. The smile the woman had worn for Garrett faded as she caught sight of Perry, becoming a little sharper, a little narrower. Then the door closed, and it was just the two of them.

"I thought we had the day off?" he said, buttoning the shirt to his throat and hiding that condemning mark.

"Unfortunately, someone forgot to mention that to the criminal classes," she replied. The scent of somewhat rancid lilies wafted through her sensitive nostrils as he drew closer. Perry screwed her nose up. "You smell like a whorehouse."

"And how would you know what a whorehouse smells like, my lady peregrine?"

Touché. As one of the only two female blue bloods in London, she was expected to be above reproach in all respects. The aristocratic Echelon who ruled the city had decreed that only males were to be given the blood rites that infected a human with the craving virus, and began the transformation into a blue blood.

The Echelon feared that a female's sensitive nature would be unable to deny the strong lusts and fierce cravings of the virus. Perry was determined to prove them wrong. She sipped her blood in private, using her own money to purchase it from the draining factories the government collected the blood taxes at, and maintained herself with a fierce decorum. Indeed, Garrett often told her she was almost puritanical, which bothered her a little.

Not everyone could be as careless as he though.

"So what is urgent enough to drag me from a rather pleasant bed?" he asked, thundering down the stairs in front of her, and slipping his black leather coat—the uniform of the Nighthawks—over his broad shoulders.

"My apologies. Perhaps I should have waited another five minutes—that's how long the ladies keep your interest, isn't it?"

"They keep it for considerably longer than five minutes." The sound of affront in his voice faded with the appearance of the devilish grin he shot her over his shoulder. "But not a great deal longer, you're correct. You shouldn't sound so prudish. All work and no play, Perry... Makes a girl... dull."

That smarted. "Does a murder sound interesting enough?"

The smile died on his face, his blue eyes sobering. "Who?"

Holding onto her frustration seemed petty. "An actress at the Veil Theatre, possibly."

"The body hasn't been found yet, only... traces of blood, I'm told. Whatever that means."