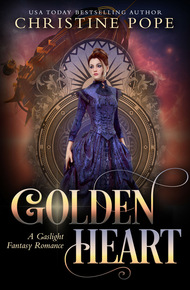 The adventure of a lifetime...or a trap she can't escape?

When the proper Miss Lavinia Greene receives a letter from her eccentric inventor uncle asking her to visit him at his castle in Romania, her only thought is that his invitation will give her a wonderful opportunity to escape her carefully ordered existence. Even as she acknowledges her attraction to her uncle's mysterious new assistant, Joshua Jones, Lavinia also finds herself drawn into mayhem and murder as foreign agents attempt to seize her uncle's latest invention.

Fearing for her life, Lavinia must navigate a shifting web of loyalties and deceit, whether in the wilds of Romania or the elegant ballrooms of a Victorian London just slightly different from our own. But can she discover the truth of her own heart before it's too late?

We have another StoryBundle exclusive, this time from USA Today bestseller Christine Pope! I've had the pleasure of working with Christine in a number of author collaborations, including a series of fairytale retellings. Her love of fairy tales is evident in her richly drawn stories, and Golden Heart is no exception. Complete with fabulous inventions and a gothic castle in Romania, this novel will sweep you away into an alternate world filled with romance and adventure. – Anthea Sharp

Lavinia's knees buckled, and if it hadn't been for Mr. Jones's swift grasp on her wrist, she would have collapsed. Her stays were too tight. Suddenly it seemed as if she couldn't breathe.

"Stay with me, Lavinia," he said urgently. "Don't look anymore."

That sounded like good advice. She shut her eyes, blotting out the study, the limp bodies, Edith's accusing dead stare. A little strength returned to her limbs, and she straightened.

"I'm all right," she told him. Perhaps not; her voice shook as she uttered the words.

He gave her a single, penetrating look, then nodded, as if reassuring himself.

"What happened?" she asked.

In response, he took a few steps into the room and paused. "Don't come any closer. They've been — well, they've been shot."

"How on earth would I know?" He shook his head, as if scolding himself for the abrupt words. "My pardon. This is — this is dreadful." The color had drained from his face, and his mouth was very grim. "But it appears someone was looking for something."

He would not meet her gaze. "I have no idea."

In that instant she knew he must be lying to her, but why, she had no idea. And standing here and arguing over the bodies of her uncle and poor Edith Burns seemed the height of poor taste. "We must get some assistance. There must be someone in town — a constable, or a magistrate — "

Lavinia broke off then, for coming down the hallway toward them she heard the sound of rough shouts, and curses in a language she couldn't understand.

Mr. Jones's head came up then, like a hound scenting the wolf at the door. "Follow me," he said, then more urgently, "Run!"

For once she didn't bother with any questions. He bolted across the study and flung open a door she hadn't noticed hitherto, one that had been cleverly concealed within the ranks of bookcases. A narrow corridor followed, and then an equally narrow set of stairs. At one point she stumbled, the heel of her boot catching on the jagged stonework. She flung out a hand to keep herself from crashing into him, and winced as she felt the delicate bones in her wrist jam together.

No time to worry about that. They emerged in what she recognized as the large unused hall downstairs. To her surprise, Mr. Jones went immediately to the baize-covered shape of the pianoforte, and lifted one end of the dust cloth.

"What on earth are you doing?" she demanded, gritting her teeth against the pain in her wrist. Very likely it had been sprained.

"Taking the one thing we can't leave behind," he responded, then lifted from the interior of the pianoforte's mechanism a large brass-bound box. He tucked it under one arm. "Let's go."

Questions would have to wait. From upstairs she heard the pounding of heavy feet, and he turned at once and led her down another corridor, this one culminating in the small courtyard where she'd driven the trap only yesterday.

Running now that they had reached open ground, Mr. Jones ranged several paces ahead of her. Never in her life had Lavinia forced her legs to move like this, pounding down the gravel driveway even as her heart thudded against the constricting corset. She didn't dare look behind her. She could only keep her gaze fixed on his back, on those long legs that ate up the ground so much more quickly than her own did. But it was all right if he were several lengths ahead of her, as long as she kept him in her line of sight.

His destination appeared to be a low stone outbuilding a few hundred yards from the stables. At first she couldn't comprehend why he would be headed there, but as he swerved around to the left and she changed course to follow, she suddenly understood.

Outlined against the surrounding trees was the graceful oval shape of an airship, albeit one much smaller than any she had yet seen. The wooden gondola beneath the silvery balloon seemed only large enough to take three or four adults at the most. But, gloriously, it stood ready, the gangplank down, the craft itself pulling gently at its mooring cables.

Of course it was ready. No doubt her uncle had overseen its preparation earlier that morning while she was off riding with Mr. Jones. She thanked heaven for that small stroke of luck.

"Get in," he commanded. "I'm going to cast off. And take this with you." He shoved the wooden box he carried into her arms. It was heavier than she had expected.

Lavinia took the gangplank steps two at a time and found herself in a small but luxurious cabin, one fitted with brass-encircled portholes and four upholstered seats. A door immediately ahead of her led to the captain's compartment, where an elegant mahogany steering wheel stood surrounded by gleaming brass instruments.

The ship shuddered beneath her, and she grasped the back of one of the passenger seats to keep herself from stumbling. The wooden box slipped from her fingers, but with rare good luck it landed on one of the seats and appeared to take no harm. Outside the portholes, the landscape began to drift by. Then she felt another shudder, a larger one this time, followed by a loud thud, which seemed to signal the hatchway door had been closed.

Sure enough, Mr. Jones entered the cabin and then brushed past her, going at once to the steering wheel, even as he grasped a brass lever to his right and pushed it all the way forward. At once the little airship began to move ahead, and its altitude slowly began to increase.

A blur of dark movement outside one of the portholes caught Lavinia's eyes, and she gasped. Four men, running at top speed toward them. And one had lifted his arm to reveal the ominous outline of a pistol.

"They're going to shoot!" she cried.

Mr. Jones did not look back, but instead did something complicated to one of the control mechanisms. "We're metal-clad. They'd have to get a direct hit to do any real damage."

Improbably, her first thought was, But I read that metal-clads were impossible!

Lavinia shook her head. Obviously they weren't, or she wouldn't be riding in one.

A high-pitched ping! sounded almost immediately overhead, and she winced. "Can't we go any faster?"

"No, Lavinia, we cannot. I already have the engine at full power." He hesitated, then said, "Come and take the wheel."

Although she had just yesterday daydreamed about such a moment, now she could only look at him, aghast. "Whatever for?"

From inside his coat pocket he produced a gleaming silver-chased pistol. "Because I believe you'd prefer to man the helm rather than take a defensive position."

She stared at the pistol, then started as another ping! hit the airship's fragile metal skin. "I'll take the helm."

"I rather thought you would."

They traded places, Mr. Jones going to the hatch even as she moved forward and took the wheel in her gloved hands. A meadow sloped downward before her, bordered on either side by stands of evergreens, and the sun blazed down from almost directly overhead. It would have been a lovely picture, under different circumstances. Now she could only bite her lip and keep the airship moving forward, centered between the forest outcroppings.

She heard his pistol go off, and a quantity of white smoke filled the cabin. Almost at once there was another bang, followed by several of those ominous pings. But the little ship seemed to hold, and Lavinia murmured a quiet thanks under her breath for her uncle's apparent engineering prowess.

Her uncle. In the flight from the castle, she'd almost forgotten about the lifeless forms of her uncle and her maid, but now the hideous scene came rushing back into her mind. A hot little dry ache began to form somewhere at the base of her throat, and she swallowed. The sunny landscape shimmered behind a veil of tears.

Lavinia blinked, and maintained her death grip on the helm. All she had to do was focus on the hard shape of the wheel biting into her hands, on keeping the ship pointing forward. Best not to think of anything else.

A moment later, Mr. Jones stood beside her. In silence, he reached out and very gently unwrapped her fingers from the polished mahogany wheel.

"We're away," he said. He seemed unable to look at her directly.

Incapable of doing anything more than nodding silently, she stumbled out of the pilot's cabin and back into the airship's main chamber, where she sank down onto one of the overstuffed seats. She wouldn't allow herself to sob, but tears overflowed her cheeks as she stared out into the bright, blurred landscape outside.

She and Joshua Jones were safe for the moment, but her uncle and Edith were gone forever.

Lavinia wondered if she would ever know why.