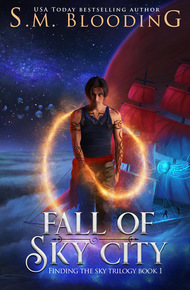 SM Blooding lives in Colorado with her pet rock, Rockie, and Ms. Bird who is really a bird. Her real name is Stephanie Marie (aka SM). Friends call her Frankie.

Frankie challenges the world around her. She's survived hurricanes in a tent, and ditches in winter. She's sometimes crass, often crude, and almost always blunt. She's dated vampires, werewolves, sorcerers, weapons smugglers and US Government assassins. Yes. She has stories. She loves to take the real world, find a singular line of truth, and wrap a complex fiction of reality around it.

SHE KILLED MY FATHER. I'M BRINGING THE WAR TO HER.

My name is Synn El'Asim and I live on an airship. Our way of life is dictated by seasons—predominately the four-year-long winter that completely freezes the oceans. We are nomads by necessity. Some of us live in the skies, like me. Some on land. Few on the seas. Others reside in the tentacles of large jellyfish we call lethara.

The Hands of Tarot threaten our ways of life. They're ruled by Queen Nix, who is trying to destroy the larger tribes. I thought my family and I were safe. We have the largest fleet. We're fast and we're strong.

I was wrong. She catches up to us with her metal flying machines and horrifically kills my father. The time for running is over. I'm taking the fight to her and her gear-filled city in the clouds.

USA Today bestseller SM Blooding brings us a fast-paced novel filled with fantastic world building. The Fall of Sky City is a skillful blend of fantasy and steampunk, set on a water world where the skies are full of airships and the queen rules from a city in the clouds. Immerse yourself in SM's world and don't worry – there are two more books out in the series! – Anthea Sharp

The device we were working on was a pistol I could use to conduct my magical energies through. I held our latest version in my hands, a pair of mirrored goggles covering my eyes. I looked over at the tall red-headed man. "Ready?"

He nodded once, snapping his goggles into place.

There was a commotion behind me. We were supposed to be alone in the laboratory when conducting our experiments, a ruling that had been set down after we'd nearly killed everyone in a two decametre radius. I turned to see Keeley and her friend Yvette.

I adjusted the setting to hide my blush. I don't know what it was about Keeley, but whenever she was in the room, I felt happy. Warm, like I belonged. A part of me said it was just the fact that Nix had stripped away all my friends and family. I was used to being close to others. Here, I was isolated. I'd never been so alone in my entire life.

Yvette, however, didn't belong, and to hear her complain, you'd think she'd find someone else a little more fashion forward and shallow to converse with, but no. She liked spending her time with us. She was taller than Keeley, but only because of those ridiculous heels she insisted on wearing. She wore the blue and silver of the House of Swords. She looked absurd with her frills and her frocks and those—I shook my head and turned away. Those hats. What was the point of a hat that covered so little space of your head? I had no idea. And why one needed a feather on one's ludicrously small hat was simply beyond me.

Joshua handed both of the girls goggles.

I didn't expect Yvette to get them over her head. Her brown hair was piled high with curls and pins and that silly hat, but she managed to do so without disturbing a single feather or bead.

Keeley wore her normal green and gold, her dress simple, her red hair in a long braid. She put her glasses on, nodding to whatever it was that Yvette was saying, and grabbed a stained apron.

Yvette turned to me, one hand on her hip. "I don't know how anyone can understand a single word you say."

Yeah. She was one to speak. Her Handish was so garbled by her accent, I think Keeley was the only one who truly knew what she said.

I looked at Joshua. "I'm taking that as a yes."

"As long as you're not going to blow us up again." She handed Keeley a glass jar of the fertilizer they were both working on. "T'es prêt?" You ready?

I let out a long breath, shook out my arms, raised the pistol, sighted down the short barrelm and pulled the trigger.

Energy rushed out of my arm in long runs of burning heat. The pistol transferred it from my hand and…

I took the metal scraper from the table and quickly rubbed the melted pistol from the palm of my hand, some of my skin going with it. With a thought, however, the skin grew back.

Yes. That was a side effect of my powers that we discovered when we nearly blew…me…up.

Yvette tsked and pulled her goggles from her eyes, setting them on her forehead. "That was disappointing."

I sent her a quick glare, throwing my goggles on the table. "We're making progress."

"How?" Joshua demanded. "Wha'ever we did melted the bloody thin'."

"Ah, yes," I said with a cheeky grin, "but that's a definite improvement over doing nothing or, worse, exploding."

He growled something under his breath and pulled out the schematics for the pistol. "I tried tellin' ye that addin' the copernicium was a bad idea. But would ye listen? Noooo. An' why no'?" His lips flattened, and his freckled nose flared. "Because yer the great new Primus with all this fantastical power tha' ye can't ruddy use, but ye know more'n the rest o' us do."

"Joshua." I tipped my head and looked at him with a playful grin. "The copernicium was the thing that triggered the reaction."

"It's too bloody unstable," he argued, scribbling over his diagrams. "I told ye and told ye and—"

"Yes." I rolled my eyes and stared at my notes. "However, we're succeeding in outwitting its volatility."

"Oh, yes, Master of the Elements, we've succeeded in not blowin' ourselves up. Hooray for us."

"Indeed." Sometimes, the man's sarcasm far outreached his mind's capacity. "So, if we just add—"

We spent the next hour working on the metal composition of our next test version while the girls occupied the far edge or our large table and worked with something that looked like dirt but smelled much worse.

People filed in, reclaiming their benches and work areas. A group on the far end of the room was working on a floating disc. Who knew what they were going to do with that? The possibilities seemed endless. Another group was working on one of the two-winged flying machines. I wished, not for the first time, that I could fly one.

The large laboratory filled with a loud buzz as people collaborated and experimented and occasionally blew things up. I had no idea why the Heads of the Collegium were so upset with us when it was a weekly occurrence.

Finally, Yvette put her fingers to her temple, and let out a long sigh of frustration. "I'm done and famished."

That was a language I understood. I kept my hands steady as I continued to work on soldering the rivers of wire between the trigger and the barrel.

Joshua picked up his head. "I've got it."

Yvette held up her hands. "I do too. I think we should go to that lovely café by the Librarium. You know the one I'm talking about. The one with those lovely little sandwiches."

"No." He grimaced in her direction and then pointed his pen at me from where he was stooped over his drawings. "The solution."

I set down my soldering iron, pushed it aside, and leaned in. "What?"

I narrowed my eyes at him. "How is a powder going to help anything?"

"Ye don't see?" He pushed himself up. "Yer pistol has no ruddy ammunition."

"That's what I've been tellin' you boys for weeks now," Keeley said to her microscope. When she wasn't around her brother, her accent was nearly invisible, but when she spent any time at all with him, her words gained a slight lilt. "But what would a girl know about a silly gun?"

"No," I said for the thousandth time. "I am the ammunition. I just need something to funnel it through."

Joshua was vigorously shaking his head. "Listen, ye daft man. You," he pointed his hand at me, "are the catalyst and tha's the reason the copernicium worked. Well, kind of. It didn't—"

His face twisted in a derisive frown as he shook his head, charging forward. "Only kind of. Withou' a form of ammunition, though, this thin' will never truly work because we're lookin' at it all wrong."

I shook my head, trying to see where he was taking it, but failed.

"You're the catalyst," Joshua repeated.

Keeley looked up from her notes. "As I've been tryin' to tell ye all along now, you're the powder. You're lacking bullets."

"Ah," I said, pointing a finger at her. "But that's where you're wrong. I don't need bullets. I just need it to work like my electrostatic array pistol or my plasma—"

"Holy words of Tarot," Joshua exclaimed, stepping around the table to clap me on the back. "Those were yers?"

I pulled back to look him in the face. "You know about them?"

"Who do ye think the queens set to takin' 'em apart so we could study 'em?"

My mouth opened, but it took a moment for words come out. "You took them apart?"

"Well, yeah. But if'n it makes ye feel any better, I put 'em both back together."

I stared at him aghast. They were my prize inventions.

"But," he said, backing away quickly, "I think you'll find that mine work much better."

Color drained from my face. "Yours?"

He shrugged with a chuckle. "Yeah. Mine. My very own."

Keeley hopped off her stool, left her apron, and followed Yvette out of the laboratory.

I raised my eyebrows at Joshua. "When was the last time she offered to pay?"

"Has she ever?" He pulled his apron over his head and draped it on his table.