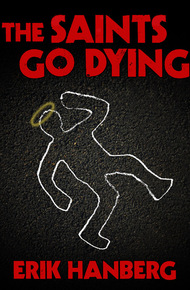 Arthur Beautyman, a computer hacker turned detective, is hunting a serial killer targeting modern day saints. Against him is an unscrupulous reality TV show and a member of his own department, who doesn't know the hacker she's tailing is in the office next door. It's a deadly cat-and-mouse game set against the lights of Hollywood.

Only on TV do people get to look good at three in the morning, Arthur Beautyman thought. He dragged himself out of his car and into the Santa Monica police station, feeling like his soul was on strike, his body left to fend for itself.

One look at the bags under the eyes of the desk sergeant inside the door and Beautyman wondered if anyone ever really got used to being up at this hour. He flashed the sergeant his detective’s badge. “I’m here to see the suspect you’re holding in the Babylon murders.”

The sergeant looked at the badge and the ID photo next to it, and back to Beautyman’s face. He lingered on Beautyman’s features for a moment and checked again. Have I really changed that much? Beautyman took the opportunity to look at his own photo. It was more than the weight loss. The light pockmarks scars from his teenage acne looked deeper now against his tightened cheeks. The photo also showed no sign of the gray strands that had invaded his dark brown hair.

His green eyes were the same; other than that Beautyman was starting to feel like he was walking in another man’s skin. He closed the leather over his badge and looked back up at the desk sergeant. “You were here when they brought the suspect in?” Beautyman asked.

The sergeant nodded, reaching for the phone.

“A tipster called the Watchdog hotline. We followed up and apprehended the suspect in a parking lot off the Pacific Coast Highway. He matched the description, so we put him in an interrogation room and gave him a bottle of water, just as you asked.”

The sergeant dialed the phone and left Beautyman brooding. If he’d known this had been a tip from Watchdog, he might have stayed in bed. Beautyman hated the weekly show.

Watchdog had taken the basic premise of documentary justice shows like Unsolved Mysteries and American Justice but with a new twist. Its central premise was that cops were crooked, incompetent, and possibly as bad as the criminals themselves. The show existed to expose the police’s bumbling efforts to solve crimes, when they weren’t actively covering them up, and bring the weight of public opinion down on them. It masqueraded as a public watchdog—hence its title—seeking to reform all L.A.-area law enforcement through the “light of public scrutiny.”

Had the show’s recklessness stopped there, Beautyman might have been able to tolerate it. But they started advertising their tip line as “the number to call when you just can’t trust the police.” Since the show became a hit, Beautyman knew he was not the only detective in L.A. who had run into witnesses who remained tight-lipped during questioning and declared that they would only talk to Watchdog.

The sergeant hung up the phone and said, “They’re in the back.”

Beautyman nodded. He felt the early hour creeping back over him as he waited for the buzzer that signaled he could get into the back offices of the station. He had already given up hoping that the man in custody would be a possible suspect, let alone the killer himself. In the last month alone the Sheriff’s Department and the municipal police departments had collectively fielded hundreds of tips about the Babylon murders. They never led to the man he was looking for.

A detective and a uniformed officer were waiting for him when he came through the glass door. The young officer asked, “Any chance this might be the guy?”

Beautyman looked past the young man, staring off into space. On a good day and wearing boots, Beautyman was all of 5’6”. The officer next to him had at least eight inches on Beautyman, which gave him the option of either craning his neck to see him or—Beautyman’s preferred option in these situations—looking pensive and thoughtful. He put on his best grave and serious face. “Routine police work is always bound to turn something up eventually. Does he match the description?”

“He looks like the guy on TV,” the officer said, shrugging a bit.

“Well, that’s a good start then,” Beautyman said, meeting his eye solidly this time. Calls to Watchdog had increased substantially once the show started staging reenactments of the Babylon murders. In Beautyman’s opinion, it just got them more suspects who looked like the actor on the show, not the killer. But he held his tongue in front of the young officer.

“Can I get a bottle of water for myself before I go in?” The officer ran to get one and Beautyman turned to Sam Reynolds, a Santa Monica detective Beautyman had met a few times before. “Is there a file?”

There was. Beautyman glanced through it. It contained the transcript of the call to Watchdog and the report of the officer who apprehended the suspect in the parking lot. “Is this guy even likely to be our Babylon killer, Sam?” Beautyman asked, not looking up from the file.

“About as likely as my chances were of getting laid by Farrah Fawcett in high school.”

“I think you’ll have to chalk this up as another bad reason to get out of bed at 3 am.”

“I didn’t need another.” Beautyman put the file down on the desk. “By the way, your man at the desk … has he had his training yet?”

Reynolds shook his head. “The Chief didn’t want to spend the money for something as stupid as media training, but I’ll bet tonight’s going to change his mind.”

Most of the L.A. area police and sheriff departments were mandating media training classes. In a surprisingly insightful move, the lowest ranking officers were enrolled first as they were the most likely candidates for Watchdog to target for gotcha-style interviews.

The young officer returned with a plastic bottle of water that felt like it had been stored on top of a radiator.

“Was that your arrest report, Officer?” Beautyman asked, unscrewing the bottle despite its warmth.

“And he didn’t try to run at all? No sign of attempting to flee.”

“No sir. He was about the easiest collar I’ve ever had. Just said you’d get a laugh out of it when you got here.”

Beautyman looked up from the report sharply. “He knew me? Did he say my name?”

“He called you Beautyman, except he pronounced it Beauty Man, like you were a superhero or something.”

Beautyman put the water back on the desk. “That should have been in the fucking report, Officer. Fuck! Sam, open that door for me.”

Reynolds went across the room with Beautyman on his heels and typed in a code on a keypad next to the Interrogation Room door. Beautyman threw the door open and saw the suspect kicked back in his chair, legs up on the desk, arms behind his head, grinning like a devil at Beautyman.

“Evening, Arthur. Or is it morning already?”

Beautyman turned and whistled to the young officer behind him. “You! Officer! You see this man?”

“Yes, sir,” the young man said. He dwarfed Beautyman, but you wouldn’t know it now; Beautyman’s wrath had him cowering.

“If you’re going to watch a shit program like Watchdog, then make sure that you watch it more closely,” Beautyman spat. “This guy looks like the guy in the reenactments because he is the guy. You arrested the fucking actor.”