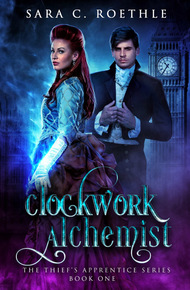 Arhyen is the self-declared finest thief in London. The mission was simple. Steal a journal from Fairfax Breckinridge, one of the greatest alchemists of the time. Arhyen hadn't expected to find Fairfax himself, with a dagger in his back. Nor had he expected his automaton daughter, Liliana. Suddenly entrenched in a mystery too great for him to fully comprehend, he must rely on the help of a wayward detective, and an automaton who claims she has a soul, to piece together the clues laid before them. Will Arhyen uncover the true source of Liliana's soul in time, or will London plunge into a dark age of nefarious technology, where only the scientific will survive?

Sara C. Roethle brings us a tale of mystery and adventure, with the added twist of an automaton heroine searching for her soul. With a dip into London's darker side, Clockwork Alchemist is packed with the classic elements of the Steampunk genre. And happily, it's the first in a completed trilogy, so there's plenty more for you to enjoy. – Anthea Sharp

Arhyen pressed his back against the cracked stone wall. He'd not expected this. He lowered the lantern in his hand as he glanced down at the aged corpse, then kicked it with his toe. It sounded . . . hollow. A pool of long since dried blood had congealed beneath it. It had obviously been lying there for months, but that didn't mean that who or what had killed the man wasn't still lurking about in the underground compound. Why couldn't the journal his client needed be somewhere nice? Perhaps an upscale mansion with a lonely, noble lady, just waiting for a dashing thief to sweep her off her feet. Or a cottage where an old man, childless and in his last years, would be waiting to grant a stranger the rights to his fortune. Nope. It had to be in a hidden underground compound with a corpse, that required a ten mile hike through the forest to access. He was lucky he hadn't gotten mauled by a badger.

Arhyen wiped the sweat from his brow, pushing back his shaggy, brown hair, then pressed onward down the narrow corridor. His boots, specially made to emit little sound when he moved, touched lightly on the stone floor as he crept further down the hall, holding the lantern in front of him. His client had claimed that the compound's owner had disappeared, but Arhyen suspected he'd actually been the dead man in the corridor. Had his client known all along? The journal Arhyen sought was allegedly valuable, containing a new alchemical formula for . . . something, but was it worth killing for?