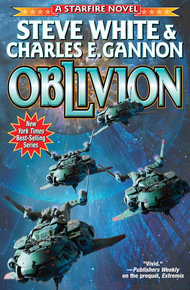 Vietnam veteran Steve White is the author of numerous science fiction novels including Wolf Among the Stars, St. Anthony's Fire, and Blood of Heroes. He's the author of the Jason Thanou time travel novels including latest entry Sunset of the Gods. White's upcoming "alternate future" novel Her Majesty's American presents the British empire in space. With David Weber, White is the creator of Starfire series novels Insurrection, Crusade, In Death Ground, and New York Times bestseller The Shiva Option. White continues the Starfire series with Exodus and Extremis, and latest entry, Oblivion.

Charles E. Gannon is the author of Compton Crook Award winning, Nebula nominated Fire with Fire, Trial by Fire, Raising Caine and Caine's Mutiny. in the Caine Riordan series. He is the coauthor with Eric Flint of 1636: The Papal Stakes and 1636: Commander Cantrell in the West Indies, both set in Eric Flint's best-selling Ring of Fire series. With Steve White, Gannon is the coauthor of Starfire series entries Extremis, Imperative, and Oblivion. Gannon is a member of SIGMA, the "SF think-tank" which has advised various intelligence and defense agencies since the start of the millennium. He lives near Annapolis, Maryland with his wife and children.

STAND AGAINST THE ALIEN INVADER APOCALYPSE!

The war with the profoundly alien Arduans has ended, and the Arduans have come to call humanity their allies. Most of them—the Arduan warrior caste refuses to accept defeat. Now known as the Kaituni, they are waging a war of extermination against all members of the pan-Sentient Union, human and Arduan alike. What's more, the Kaituni have an unexpected weapon in their arsenal: the alien Arachnids, once thought driven to extinction. The Kaituni drive the Arachnid fleet ahead of them, inflicting untold damage.

The war has been marked by retreat on the side of the pan-Sentient Union. It seems the best they can do is minimize their losses. But now the Arachnids and the Kaituni are at the doorstep to the Heart Worlds, Sol, and Earth: Alpha Centauri. The odds look bleak. But Admiral Ian Trevayne and Commodore Ossian Wethermere have faced down long odds in the past. It's time to take a stand, for Earth, for humanity . . . and for the pan-Sentient Union!

All conversation on TRNS Zeven Provinciën's flag bridge ceased when the Marine sentry rapped out "Attention on deck!" and a tall man in fleet admiral's uniform entered.

That uniform was not the standard space-service gray coverall that could serve as a spacesuit liner. For this occasion, Ian Trevayne wore the deep-blue and white and gold service dress of the Terran Republic Navy. To most people in most times and places, there would have seemed something strangely incongruous about his apparent age—early thirties at most, appropriate perhaps for a lieutenant commander—and the rank insignia of a broad gold stripe and four narrow ones on his sleeves. Not to these people, though, and not to anyone in what was currently left of human space, for his unique story was too well known.

In part, it was that story, with its mythic resonances that seemed to create a palpable aura around him, that caused the flag bridge to hold an even more profound hush than his exalted rank could account for. But only in part. These days, in his presence, people tended to take refuge in silence, not knowing how to behave around a man who had suffered such a loss as he sustained at Bug 17, two systems behind them.

As he approached the chair that was sacred to him, he spared a glance at the outside viewscreen. At a distance of almost fifteen light-minutes, the primary sun of Harnah was a faint orange-tinted gleam, for it was only a K-type main sequence star. As such, it was not a naked-eye object from the Solar system, although no one but astronomers gave a damn about how many light-years from Man's birthworld it lay in normal space. The distance that mattered was measured in warp transits—three of them, a distance that had become terrifyingly short.

Four light-minutes from the primary, and quite invisible from here, was a planet that had once been Earthlike. In fact, it still held some hardy and by now wildly mutated forms of plant life. But it had been a world of the misnamed Arachnids—the "Bugs" to all who had ever encountered them—and as such had been blasted clean of that universally loathed and dreaded form of life in the Bug War of the 2360s, a little less than two centuries ago by the standard dating of Old Terra. It was the same treatment that had been meted out to every Bug planet, and when it was over everyone had truly believed that Creation had been cleansed of the Arachnid abomination, an insensate hive consciousness that existed only to expand and consume like some obscene melanoma eating at the body of galactic life. Trevayne's mind shied away from the memory of that belief, now so cruelly disproven.

Trevayne stood beside the chair but did not sit down. He turned to a ruddy-faced man with the massive build imparted by many generations lived in low temperatures and high gravity. "Is all in readiness, Captain?"

"Aye, Admiral," rumbled Flag Captain Janos Thorfinnssen in a voice which held only a trace of the dialect of his native Beaufort. "All elements of Combined Fleet are linked into the hookup, and all personnel are standing by."

"Very well." Trevayne turned to his operations officer, currently doubling as acting chief of staff in the absence of Captain Elaine De Mornay, who was two warp transits away in the Alpha Centauri system supervising the mustering and refitting of the Heart Worlds' reserve fleets in this hour of ultimate need. Ever the traditionalist, he gave the immemorial naval courtesy promotion. "Captain Singhal, let's proceed."

Captain Gordon Singhal stepped in front of the comm screen and activated it. "Attention. Grand Admiral Trevayne wishes to address all personnel." He stepped aside, and Trevayne took his place.

The screen was split three ways, showing the faces of the admirals commanding Combined Fleet's three national components: Rafaela Shang for the Rim Federation, Mario Leong for the Pan-Sentient Union, and Adrian M'Zangwe for the Terran Republic. But, Trevayne knew, thousands and thousands of beings, human and otherwise, could see him and would be hearing his voice (not all at the same time, as the transmission flashed across a wide swath of the Harnah system at the velocity of light), with sophisticated translation software for the Orions and Ophiuchi.

In his resonant deep baritone, and in a Standard English which held the still-prestigious accent of Old Terra's Britain, he began without preamble, for none was needed.

"Even after all that has occurred, many of us still cannot comprehend what has happened to the world we knew and believed to be immutable. Despite this, you have all behaved magnificently in a long and grueling campaign. Keeping up morale despite being continuously forced to retreat is one of the hardest things warriors can ever be called upon to do." Which, Trevayne reflected, was why he had decided it was high time to give this little talk. "You have not wavered or failed. You have done your duty. But you may find it hard to fully understand what that duty means anymore, in a time when so many unthinkable things have happened and continue to happen, and so many assumptions have been shattered. Confusion and bewilderment are understandable.

"Therefore I wish to review the events that have brought us to this pass. I will be telling you things you already know, but which you may not have fully assimilated.

"Our world first began to change in 2524 when the Arduans arrived in the Bellerophon system, having crossed normal space in immense generation ships—the first known interstellar voyagers ever to do so—to escape a nearby supernova that threatened to make their planet uninhabitable. Even greater shocks were in store: their seeming lack of regard for their own individual lives, and the apparent impossibility of communicating with them. To us, these suggested one horrifying thing: a hive mentality like the Bugs. We didn't know then that the former arose from their absolute belief in reincarnation, and that the latter was due to the fact that they communicated using their empathic selnarm sense—and that our lack of that sense caused them to regard us as not fully sentient.

"It took a war to get both sides past their misconceptions. But now the Arduans we fought are our friends." Trevayne's face and voice grew stern. "Despite everything that has happened, we must remember that. The Arduans as a race are not our enemies. Our Arduan allies of the First Dispersate are marked for genocide just as surely as we are.

"For, as we subsequently learned, the vast exodus we had encountered was only the first of many. On their doomed home planet, the Arduans had continued to send forth one diaspora after another in an effort to save their entire race so that there would be sufficient new births for everyone to be reborn." Not for the first time, Trevayne wondered glumly if humans could have done as well under the circumstances. "But the Arduans of those later diasporas regressed and devolved in some manner foreign to us, and the Destoshaz warrior subspecies had become dominant, and taken to calling themselves 'Kaituni' rather than Arduans. Convinced that the first diaspora had turned traitor, and aided by information from those of their number who had already established themselves in the Zarzuela system, they prepared a war of extermination. In the course of their long slower-than-light voyage they developed new technologies and broke up their generation ships into kinetic projectiles."

Trevayne grew even more somber. "We all remember what ensued. Without warning, swarms of relativistic rocks swept through many systems of the pan-Sentient Union, devastating planets and in some cases disrupting suns. The Khanate of Orion bore more than its share of the brunt, and all humans of all our star nations appreciate and admire the fortitude with which this calamity has been borne." Trevayne wanted to especially emphasize that point for the benefit of his Orion personnel, for he knew the destruction of the artificial "Unity" warp point, which he had ordered in an effort to contain the damage had occasioned certain amount of ill-feeling, as though the humans were casting the Khanate adrift.

"But even worse was to come," Trevayne continued inexorably. "As the Kaituni war fleet began to advance along the warp lines, we were confident that their much lighter ships, however numerous, would be meat for our devastators and superdevastators—the ships that had won the war against the first Arduan Dispersate. Too late, we learned that those titanic ships were precisely the ones that cannot live inside the range of the Kaituni's newly developed relativistic acceleration weapon, or RAW, employing focused quantum entanglement to teleport particles to within the volume occupied by a sufficiently massive target. Thus it was that Admiral Waldeck's fleet was gutted in Home Hive Two. And it was in that same system that we received an even greater shock, when a nightmare from which we believed we had awakened reappeared."