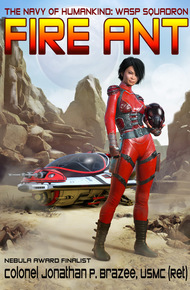 Jonathan is a retired Marine infantry colonel and now a full-time writer living in Colorado Springs with his wife Kiwi and twin two-year-olds, Danika Dawn and Darika Marie.

He has over eighty titles in print with most in the military science fiction genre.

Floribeth Salinas O'Shae Dalisay is an Off-Planet Worker, employed as an exploration pilot by the giant corporation, Hamdani Brothers. Sent on a routine mission to analyze one of the millions of systems in the galaxy, she stumbles across something that could threaten humanity's very existence. She barely escapes with her life, but in the process, has to shut down her scout's AI.

As with all OPWs, she has few rights, and instead of being lauded as a hero, the corporation thinks she is lying. Her managers believe she found something valuable and shut down her AI in an attempt to hide that fact, hoping she can sell that information to the highest bidder. Grounded, and with a huge debt now over her head, Beth has to convince the powers that be that a very real danger to humanity is lying in wait out there in deep space.

No bonus on this run, Beth told herself as she read the analysis.

Beth had been on a long run of dry wells since her last hit: sixteen missions, sixteen times without a bonus. With her expenses, all conveniently taken out of her pay by Hamdani Brothers, that left scant little to send home to her family. She needed a bonus.

There was no use wasting time hanging in the barren system. The data she'd collected had been uploaded to corps headquarters, so her work here was done.

She shifted her body in her harness. In zero-G, she didn't have bedsores per se, but she did have contact spots, irritation from where her harness and even her flight suit rubbed her. Her piss tube, which was hypo-allergenic and guaranteed not to irritate, felt like sandpaper. Her finger hovered over her console for a moment as she considered returning to the station. She'd been out for over 62 Standard days"1,494 hours, in fact"and that was a long time to be stuck in her Hummingbird, relying on drugs, nanos, and the devil the Hummingbird pilots called the "stretcher" to keep her muscles from atrophying. Her body cried to get out of her suit, to feel gravity, to walk, to stand naked in a shower as water jets scrubbed off the stink and itch of deep space. She needed the taste of a cold Coke to wash out the days of the food paste the pilots called "slime."

Can't make anything going back, she told herself. Maybe the next one's it.

With a heavy heart, she pressed the "Next Mission" button, waiting for HQ's response. Anagolay would be running her calculations, determining what system among the vast reaches of the galaxy, would offer the best probability of providing the raw materials that HB needed to fuel its factories. Even better than that, which system provided the best chance at an Alpha world, a planet that could host human life. This was the proverbial golden ring for the pilots of the Exploration Corps. Finding one would set up Beth for life. She could return to New Cebu and open up her own store. With her family's future secure, she could think about finding a husband and starting her own family, raising kids who would never have to leave New Cebu in order to make a living.

Light years away, Ana's circuits did their thing, and the AI sent out a response: SG-4021. The designation meant nothing to her. It was simply one more star system among the 100 billion in the galaxy. All the low-hanging fruit had long been plucked, systems where scans had indicated planets that could support life with minor or no terraforming required. Systems with easily harvested heavy metals had already been explored. Now, 400-plus years since the Grand Expansion, corporations, from the big zaibatsus such as Hamdani Brothers to small indies searched the black for other jewels to be exploited. Only a tiny fraction of the galaxy's systems had been explored, so no one knew what treasures were out there, waiting to be found.

By accepting the orders, Beth had just locked herself in the Lily for another 12 days at a minimum. The thought almost overwhelmed her, and she could swear her piss tube shifted, rubbing her raw.

She could have refused. The OPW Union, which was relatively powerless in most ways, had still managed to get some regulations enacted for deep-space pilots. Commercial pilots, those working for corporations, could only be required to conduct two missions before returning to their bases. Two missions, however, would barely pay for expenses for most of them. Beth wasn't a pilot for charity"her family needed the support. So, this would be Beth's fifth mission on this run.

The trip to SG-4021 would take place in two steps. First, she had to accelerate to a minimum of .54 of the speed of light before entering the gate. The transport back to Nexus Prime would take no sidereal time at all, and only a few moments to reach the next gate to take her to her destination. Then it would be the long deceleration process into the system proper where her scanners could analyze it.

The math was too complicated for a human brain to grasp, and Beth didn't even try. She trusted Ana's vast computing power and her little Hummingbird's ability to make the transit. Fly-by-night indies often got lost between systems, never to be heard from again, but not HB pilots. All of the pilots resented the zaibatsu's roughshod manner, but it was still one of the most competent. The HB Explorer Corps hadn't lost a Hummingbird in over nine years, which was one of the reasons Beth had accepted the contract with them. She had to endure the long, lonely trips in deep space, but she was not particularly brave. As a child and teen, she'd never been bit by the wanderlust bug. She was supporting her extended family, like most Off-Planet Workers, and that required her to survive the work.

New Cebu was a relatively poor world, with the wealth highly concentrated among the planet's Golden Tribe. The masses were dirt poor, but they were the planet's most valuable resource. They became the beasts of burden for all the jobs that the GT's wouldn't sully their precious skin with.

Beth stretched her legs as the Lily's navigation system inputted the instructions. They didn't stretch far. Beth stood 4'6" in her bare feet (137 cm in Universal Standard) and weighed 72 pounds soaking wet (32.6 kgs). She'd always been the smallest girl in her class, but her size had plucked her out of housekeeping at the Montclair Resort on Bally's World to become a pilot in the HB Explorer Corps. She'd received bonuses on three of her first seven missions, earning more than she could have made throughout her 15-year housekeeping contract.

The money might be her primary motivation, but over time, Beth realized she liked being a pilot. Despite the long hours in her cramped cockpit, despite the lack of real food, of tubes to take care of her bodily waste, despite the loneliness, she felt at home in space. She liked flying her Hummingbird, of being the first human to enter new solar systems. She might long to get out of her little ship at the moment, and she was frustrated by her string of dry wells, but she was glad she wasn't cleaning toilets for rich folks anymore. Beth might still be an OPW, but she'd lucked into one of the best jobs someone from her background could have.

Her console command light turned green. She could still refuse the mission without penalty. Every pilot thought that canceling a mission after accepting it would have dire consequences. The pilots might have named Ana after the old Filipino goddess of lost travelers, but the AI belonged to HB, and she was programmed to improve the bottom line. It would not be beyond HB to punish those who canceled missions with systems that had a lower probability of earning the pilot a bonus.

She didn't hesitate. She pushed the command, then flipped down her entertainment screen. Bobo had sent her the link to a two-hundred-year-old feline opera series, and she'd been saving it so she could binge watch it.

She had the time for that now.