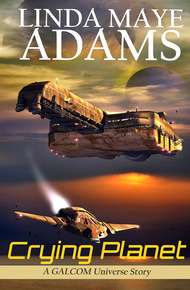 Linda Maye Adams was probably the least likely person to be in the Army—even the Army thought so! She was an enlisted soldier and served for twelve years and was one of the women who deployed to Desert Storm. But she'd much prefer her adventures to be in books. She is the author of the military-based GALCOM Universe series, including the novels Crying Planet and Lonely Planet. She's also received three honorable mentions in the Writers of the Future contest and an honorable mention in Alfred Hitchcock Magazine's contest.

Recruited for her ability to see ghosts, Hope Delgado's first mission into space may be her last. Alien ghosts infest a planet, threatening to destroy it.

But can Hope communicate with alien ghosts?

She faces distrust from the S.C. Kanjgun's skipper and his crew. Her only friend: The ghost of the dead first skipper.

With the odds stacked against Hope, if she fails, a planet dies.

A riveting space adventure that takes you on a rollercoaster ride.

The S.C. Kangjun's recycled air smelled like artificial eucalyptus. Ordinarily that would have bothered Hope Delgado, because artificial anything got into her nose and made it all itchy.

What it didn't smell like was ghost. No moldy, itchy, crawling-up-between-the-walls ghost smell.

It was the first time in her life Hope hadn't been bothered by ghosts.

The conference room the crewman had shown her to had to be the wrong place. She'd expected a bland room with chairs and a table, but this looked like a suite in a five-star hotel. She glanced down at her threadbare dress and stretched-out pullover sweater, and then at the plush blue carpet and velvet curtains.

The contrast had invisible red fingernails clawing to get out of her stomach. The crewman was gone, and she was alone, and at any moment, someone would eye her clothes and chase her out.

The outer room had a dining area and a seating alcove for meetings. Doors off the main dining room led to a small office, a kitchenette, and a bathroom—head; they called it a head on a ship. Glass cases displayed books carefully arranged by size. Her circuit of the room took her past a suit of armor that stared at her through a slit. She stopped in front of it, expecting ghostly vibrations, but it was lifeless.

It stood guard next to the large picture window that revealed the outside world: an array of stars scattered like glittery jewels. Hope had never seen so many before! She could have stood there forever, but the door behind her whooshed open.

An officer entered. She knew he was an officer because the first captain had already told her, "Follow the eagle. That's the man in charge." And this man had a silver eagle on the points of his collar. He wore the camo tech uniform, or CTU, that all the people on the ship wore—the pants and shirt changed to match their surroundings. He was in his late forties, hair growing gray, and ghosts behind his eyes.

Hope didn't know too much about military officers, but he had the regal bearing of a man who expected to be obeyed.

Like the man who proposed to her, then expected her to call up ghosts for profit.

She pushed that thought out of her head. It had been nearly twenty years since that disaster, and she'd been naïve then.

The officer stopped and gave her a long, assessing look.

Hope stared back at him steadily.

She knew she looked like a dying butterfly, as a neighbor who'd thought he was being helpful had once called her: too thin and aging too fast. But there wasn't normal anything when it came to the family curse. Her father's hair had gone gray at thirty and cold white three years later; Hope's hair sprouted gray like weeds.

Finally, the officer flapped his hand at the seating area by the window. She sat on the edge of the sofa's cushion. This probably wouldn't take long. Everyone was afraid they would catch what she had.

He sat carefully far away from her, tossing a hard-backed green book and pen onto the table.

He stared at Hope again. "How did you convince GALCOM to get you out here?" he asked.

The subtext of the question was clear as the stars outside, and it left a bad taste her mouth. "I didn't. I wanted nothing to do with no alien ghosts. GALCOM approached me and asked for my help."

"For a lot of money and Demory metal."

She stared down at the carpet. It was thick enough to bury her feet in. She wasn't wearing the bracelet here; didn't need to.

"The Demory metal saved my life, Colonel." She made a point to use his rank, because the first captain had told her that was proper etiquette, that civilians always got it wrong. "It blocks the ghosts so I can do normal things like go to the bathroom and sleep. Everyone else in my family has killed themselves before the age of forty because the ghosts won't leave us alone. I'm thirty-nine. My dream is to be an old woman. A very old woman."

Then she fixed a steely gaze on him. He looked away first.

"And why is it wrong to get money for a skill no one else has?" she said. "I am the only person who can help."

"I hope you can. We'll be at the first space port, Eridana, in about two weeks." He shifted his position, and the shadows in his eyes darkened. "There's been trouble there. They think from ghosts."

"They didn't tell me much. Poltergeist activity?"

"No. It's in the air. Like a weight, an oppressiveness, constantly pressing against you."

She leaned forward, going still. Reminded herself to breathe. "Once we had a bus crash. Forty people killed. It was like that for me until the ghosts passed on."

No one else had felt it but her, and other members of her family.

"We think it's connected to the Corellians. Things were fine until they put out the Sin Pots. The Corellians say it's for their ancestors."

Hope shivered. Her Demory metal bracelet had originated on the Corellian world.

"Sorry." He flushed. "It's a military nickname. Computer, show us the Sin Pots."

A three-dimensional hologram appeared above the table. Hope used her hand to pull it lower so she could see it better. The Sin Pot was a crudely made metal barrel that would probably come up to Hope's waist. A second image from an overhead angle show a red liquid, thick like oil, inside.

She asked, "Do you know what the liquid is?"

Graul picked up the notebook and flipped through the pages, pausing on one. How old-fashioned to still be using paper.

"I can give you a list of the ingredients," he said. "We don't know what they do."

"Are they specific to the Corellian home world?"

Graul added a quick note that looked like it had a question mark at the end. "Most of them are common elements you could get anywhere. Two are unique to the Corellians."

"I don't know of any liquid that would have anything to do with ghosts. Could be the Corellians developed it, though I can't see why. Can't you remove the Sin Pots?"

"No." Graul bit his lip. Making up his mind. "It's not that easy. The Corellians supply GALCOM with minerals we need for our space cruisers. When we tried removing the Sin Pots, they delayed deliveries until we put them back."

She'd read about that in the news, though the delays had been passed off as caused by a space storm.

"You couldn't negotiate with them?"

The shadows in his eyes grew darker still. He looked down at the book, not reading it. Closed the cover. "No."

He set the notebook on the coffee table and straightened it. Laid the pen on top of it.

She waited, but he didn't say anything further.

She said, "I told the GALCOM representative the same thing: All I can do is look. I don't know if my ability to see ghosts would allow me to see Corellian ones, or if I would be able to talk them."

Graul fell silent for a long moment. "We have to try. We can't let it get worse."