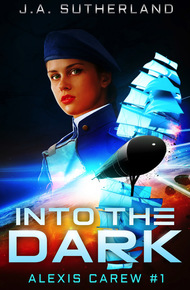 Reality is a townhouse in Orlando with a 90 pound husky-wolf mix who won't let him take naps.

When not reading or writing, he spends his time on roadtrips around the Southeast US searching for good barbecue.

Into the Dark - Alexis Carew #1 by J.A. Sutherland

At fifteen, Alexis Carew has to face an age old problem - she's a girl, and only a boy can inherit the family's vast holdings. Her options are few. She must marry and watch a stranger run the lands, or become a penniless tenant and see the lands she so dearly loves sold off. Yet there may be another option, one that involves becoming a midshipman on a shorthanded Navy spaceship with no other women.

Alexis burst onto the gundeck, grimacing at the crackle of static over her suit's radio. Only five of Merlin's six guns to starboard were continuing to fire, the number two gun having been struck by the pirates' shot, its housing melted and shattered. She froze for a moment as she saw a still form in a midshipman's vacsuit being carried into the aft companionway by two spacers. Philip!

But she had no time to think of him as she saw the pinnace rapidly gaining on them through the portside gunports.

"Starboard six, move to port!" she yelled, hoping that the guncrew would hear her over the increasing static caused by the encroaching darkspace, and she wouldn't have to cross the length of the deck to get their attention. "Starboard six, to port!" she yelled again, midway, and saw the guncrew respond, leaving their gun unloaded and crossing to the as yet unfired guns to port.

"As you bear and move up the line, lads! Put it right into their guns." she yelled, intending the crew to fire the rearmost gun first and then move to the next while she reloaded behind them. With luck, they'd get six rapid shots into the pinnace.

She moved to the shot locker and grasped one of the heavy canisters, readying to carry it to the gun as soon as the crew fired. The guncrew had slewed the heavy gun to point aft as much as it would bear, and were waiting for the pinnace to cross into the gun's firing arc. She rested the canister on the half-empty rack of grapeshot and waited, while men from the starboard guns came to replenish their guns in a steady line and others brought replacements from the magazine below.

With a start, she left the canister behind and rushed to the number five gun and threw open its breech. "Port six, belay firing!" she yelled, seeing the gun still loaded with chain shot. Shot that would never penetrate even the light hull of the pinnace's gundeck in action. "Up five and fire for her sails! Reload with ball!"

She closed the gun's breech and rushed back to the shot locker as the guncrew adjusted and fired. The wide line of the shot caught the pinnace's topsail and cut a wide, sparking gash through it.

"Pour it on, lads!" she yelled, hoping the starboard gun crews could hear her over the interference. She grunted with effort and ignored the pain in her shoulder as she hefted the heavy shot and rushed to the just fired gun. The crew took aim and fired the second gun in line. This shot was lower and behind the pinnace's mast so that it struck the other ship's hull, still parting one of the mast's backstays.

As she slammed closed the breech on the gun, she saw with horror that's Merlin's next shot followed the second, slicing through a group of men who'd rushed onto the hull to repair the damage. The wide beam of the chainshot caught one of them squarely, cutting him in half and sending his torso drifting off toward the edge of the ship's field, the lower half still standing on the hull, held in place by its boots' magnets.

Alexis felt her gorge rise at the sight, but she clamped her jaw and swallowed heavily. Not again. Not now.

She kept her eyes on her work and dragged the shot back to reload the second gun, then paused, breathing harsh and hand resting on the next shot, to survey the action to starboard.

Both ships were firing as quickly as they could, sending bolt after bolt of energy into their foe's hull, but the fire from Merlin was ragged now, no longer the controlled, intimidating broadsides they'd started with, but with each gun firing and reloading at its own pace. And men were down, some of the gun crews reduced to only two men, with bodies, either dead or unconscious scattered around the deck.

But the fire from the pirate sloop had lessened as well, she saw, even as one of their shots found Merlin's hull between two guns, burning through the thin material of the gundeck and striking the middle barrier. The other ship was horribly battered, its hull blackened and pitted, with, she noted, only three guns firing.

She rushed back to reload the third gun just as her crew fired the fourth and the pinnace to port, finally able to bring its guns to bear on Merlin, fired its broadside, only four guns, and those small, with little hope of breaking through Merlin's hull, but one of them found the gunport near her and she flinched as the bright beam flashed by, then blinked rapidly to clear her vision.

She heard distorted cheers over the static filled radio, but couldn't see what had happened until she raised a hand to her helmet and scrubbed it across her suit's visor. Black soot and shards of melted plastic wiped away, allowing her to see, somewhat, through a faceplate that was hazed and pitted. Alexis shuddered, realizing just how close she'd come to that bolt taking off her head. Or holing my suit, which would do the job just as well.

Able to see again, though with difficulty, Alexis could see what the cheers were for. The pinnace's mast had been shot through midway up its length, dousing its sails, and the other ship was rapidly falling behind the fight.

"Back to starboard, lads!" she yelled, hoping her suit's radio hadn't been damaged by the blast that had burned her visor. "Do for the other one now!"

She followed the men back to the starboard guns, adding them to the crews already there, and continuing to heft shot herself to reload the guns. Alexis found herself in a strange mix of fear and elation as the battle became a blur of carrying shot, loading guns, dragging the wounded clear of those still able to fight and screaming encouragement she was unsure the men could even hear. More and more holes appeared in the hull between gunports, the shots throwing off hot droplets of melted plastic from the hull and bulkheads.

This was so different from working the sails during battle, where she had been helpless to fight back. Now, though she knew she could be killed or injured herself at any moment, her blackened, pitted visor a constant reminder. She could fight back, was fighting back and her crew was doing well, sending bolt after bolt of shot into the enemy ship.

Her shoulder burned with the effort of carrying shot, sweat ran down her face, stinging her eyes and with no way to wipe it away, and her throat became raw from screaming encouragement to her crew. My crew, she realized with a start, for no orders were coming from the quarterdeck, it was only her and the men, and she felt a sudden swell of pride in herself and them. Breathing heavily, and with her mouth dry and throat burning, she caught her suit's water nozzle between her lips, surprised to find that she'd already drained it dry. She saw that the other ship's fire had been reduced to a single gunport, and that firing sporadically, and felt a thrill of exultation.

"Aim for that forward port, lads! Finish the bastards!"