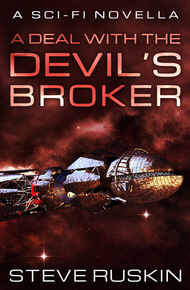 Amazon bestselling author Steve Ruskin writes science fiction with an hint of rebellion, and historical thrillers with an element of magic. Reviewers recommend his space opera series, the ExoRok Rebels, to "fans of The Expanse," while his supernatural thriller The Newton Cipher has been called "Dan Brown meets J.K. Rowling."

Steve is also an award winning historian, with a PhD in History of Science from the University of Notre Dame. His book America's First Great Eclipse is a bestselling account of the the total solar eclipse of 1878.

A Deal with the Devil's Broker by Steve Ruskin

Noemi Ochana is a rookie cargo lifter on the interplanetary freighter Devil's Broker, where she drives her mech in the cargo bay, stacking crates of processed ore. It's her first job off of the orbital station where she grew up, and she practically had to sell her soul to get it. Until she fulfills the terms of her contract, she's essentially company property.

With the cards already stacked against her, Noemi soon learns that not everyone on the Broker wants her to succeed. And when she discovers an onboard conspiracy, Noemi must risk everything to do what's right, even if it means losing her chance at freedom.

A Deal with the Devil's Broker is the prequel to a forthcoming military/space-opera trilogy, the first book of which will arrive in 2019.

Overcome by the pain in her hand, Noemi Ochana leaned back against the frigid metal wall of the maintenance corridor, the cold quickly penetrating the fabric of her skintight bodysuit.

It was well below zero down on the maintenance deck of the interplanetary freighter Devil's Broker. Noemi's breath froze in front of her face, each puff growing wispier and more elongated as the circulation vents above drew it up and away. If not for the air scrubbers constantly removing the ambient moisture, the corridor would be coated in ice.

She stuffed her thumb and forefinger into her mouth, and the taste of warm blood and old grease covered her tongue. It made her want to spit, but any more liquid on the floor could cause her to slip.

Damn this frigid, cheap-ass ship and the cheap-ass company that flies it, she swore silently, her mouth clenched around her throbbing fingers. She wondered—not for the first time—if she would have been better off back on Tiber Station instead of here, employed as a cargo lifter on the Devil's Broker, one of the ExoRok mining company's freighters.

No, she decided. I'd rather bleed to death inside this tin can in the cold heart of space than be alive and warm on that dead-end station.

She shifted away from the wall and tentatively withdrew her fingers, holding them up in the corridor's dim light.

"Hell and starlight!" she swore. There was a deep gash across the pad of her thumb, and another slice on her finger that tore the nail half off. Thick, dark blood welled out of the cuts the moment the fingers were out of her mouth, and she caught a distressing glimpse of exposed bone.

"That's gonna need to be fixed," she muttered.

She'd forgotten her med kit in her room, so she had no nanoclot bandages. Dumb decision—that was a protocol violation right there. No gloves, either. Double trouble—they'd penalize her for sure, increasing her already considerable debt. But she had been at a party, dammit. Who brings nanoclot bandages and techsuit gloves to a party?

She eyed the locked hatch door across from where she squatted. Jeral—her team leader—was behind that hatch. Possibly hurt. Probably drunk. And about to be ejected into space.

She put her fingers back in her mouth and wondered how the hell she'd gotten herself into this mess.