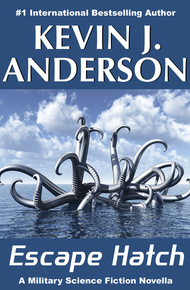 It came from beneath the sea! The hideous alien "sluggos" have arrived, bloodthirsty tentacled aliens that infest the oceans of Earth, and it will take the best military minds of the Planetary Navy to defeat them.

Admiral Bruce Haldane has faced the sluggos in engagement after engagement, and the humans are slaughtered each time. Fortunately for Haldane, though, because of his high rank, he has an "escape hatch"—at the last moment of a military defeat when his own death is certain, he can swap his consciousness with another safe body, a "cannon fodder" recruit who exists only to be ready in case he needs to make the ultimate sacrifice.

Paulson Kenz is one of those cannon-fodder recruits, too weak and wimpy to be appropriate for the battlefield, but he doesn't want to go down without a fight. Knowing that at any moment he might find himself transported into a horrific last stand against slavering aliens, he has to become an even greater military genius than Admiral Haldane himself.

The mass of alien tentacles writhed over the side of the Earth Planetary Navy destroyer. When the Far Horizon's Admiral Bruce Haldane saw the vicious things crash onto the deck and scatter in all directions, he knew the battle was lost. There was no stopping the swarm of Sluggos.

Rough seas rocked the destroyer, but the grim crew who manned the guns against the worm things were not worried about getting seasick.

The enormous cluster of alien creatures also attacked from beneath the surface, hammering the Far Horizon's armored hull. The thunderous clang was even louder than the explosive artillery. How could something so soft and squishy sound so loud? he wondered, then stalked along the deck, a weapon in each hand as he shot the swarming slugs. Each creature exploded with a disgusting splat of oozing protoplasm. The ship's crew were running up and down the open deck, wading through smashed Sluggos, but the things kept coming from below.

Each alien was the length and thickness of Haldane's forearm, looking like a beige banana slug with teeth. The Sluggos combined and moved in concert, wrapping their wormlike bodies together to form a larger organism. Thousands of Sluggos braided into a giant tentacle that rose up from the rough seas to wrap around the destroyer, and then dissolving into countless ravenous components again. The Sluggos squirmed forward, mouths chomping. They were blind, but they were hungry, and there were so many of them that the doomed crew had no place to hide.

Admiral Haldane was grim, but he drove back his panic. As their leader, he had to focus on the fight. His crew was yelling, some clearly fearful because they had just begun to realize they were all going to die. They didn't have an escape hatch. Knowing he could give his all and still live to fight another day let Haldane concentrate on the crisis and do what was necessary, without being crippled by fear of his own mortality.

"Keep shooting! By God, there's no shortage of targets!"

The lower decks had been infested, and evacuating sailers had come out into the open. One of the nearby seamen, his dungarees splotched with yellow-green ichor and bright red blood, fired his sidearm until it was empty, then snatched another still-hot weapon from the hands of a dying seaman on the deck. The wounded seaman's abdomen had been ripped open, and his guts spilled out like another swarm of Sluggos. Without pause, the desperate seaman continued firing, each bullet exploding one—or more—of the squirming aliens.

"Aye, sir. It's not a shortage of targets we're worried about, Admiral," he shouted over his shoulder. "It's running out of ammo."

Haldane kept firing his own sidearm, not even making a dent in the invasion. He shouted back, hoping he sounded encouraging, "According to the weapons locker manifest, we should have ten thousand rounds aboard the Far Horizon." The number sounded impressive, objectively, but not in comparison to the million hungry Sluggos swarming over the destroyer. He had opened the armory and distributed weapons as widely and as swiftly as possible, to the Marines as well as to any other sailor with fingers and thumbs.

Everyone aboard would be alien food before long. Haldane felt sorry for them, but he'd make sure they got a nice memorial ceremony back in La Diego.

After humanity had ventured away from Earth and set up fledgling colonies on the Moon, Mars, and the asteroid belt, nobody ever guessed that an alien invasion would target Earth's oceans. The invaders had landed in the Pacific, emerged from their interstellar spaceships, and began swarming through the seas.

The slimy creatures moved like a gigantic school of fish, thousands of separate pieces that formed a sentient community organism—an incomprehensible alien creature that managed to build starships, travel across space, to plunge into Earth's oceans, where they reproduced at a furious pace—whether by fission, or breeding, or eggs, no one knew—and swiftly became a terrible hazard.

They attacked ships, sinking commercial freighters, cruise liners, fishing vessels. The Earth Planetary Navy was little more than a token force, peacekeepers and emergency responders. It had been a long time since battle fleets went on a full-scale war footing. Now, the EPN went on the hunt, combing the waters in search of the enemy.

Sonar could detect the large clusters of Sluggos, which then vanished with each pulse and then re-formed elsewhere. Admiral Haldane had already led two preliminary engagements, each one disastrous. He was about to make it three for three.

Reaching this point in the South Pacific, the suspected location of the original Sluggo starships, the Far Horizon had dropped dozens of depth pulsers hoping to destroy the underwater alien base. The explosions had been wonderful, creating rooster-tails of water like massive geysers. The shock waves should have ruined any Sluggo structures on the ocean floor.

The excitement was short-lived, though. The individual aliens had combined into a monstrous body, countless squirming components adding together like cells. Then the community organism rose up like the most twisted nightmare of any sailor's legend and attacked the Far Horizon.

The shapeless beast shifted and rearranged its bodily blueprint, first engulfing the destroyer with tentacles and then smashing onto the deck in a huge flat mass like a manta, which then dissolved into an overwhelming slimy army of individual Sluggos that could attack—and devour.

Constant gunfire continued to ring out, and even ten thousand rounds didn't last very long. When the crew ran out of ammo, they used metal pipes, tools, even small storage pods, to smash the things. Someone had rigged a flamethrower and jetted fire that fried the wormlike aliens. When their protoplasm boiled, they exploded, but the Sluggos did not feel pain or fear, and more of them came forward. One young seaman thrashed as a dozen of the worm-things chewed into the meat of his thighs and calves, then tunneled through his chest. He kept screaming until one crawled down his throat.

Other seamen had better luck with fire extinguishers, driving the Sluggos away, briefly, but there was no place to hide. Each extinguisher ran out within minutes, and the crew used the empty tanks to smash more Sluggos.

"Turn the heavy-caliber guns down," Haldane yelled. "Fire into the water!"

"It'll make some big explosions," he shouted back. That was something at least.

At central fire control, weapons officers tilted the large-bore the guns down, and the guns roared, but even the heavy shells did little more than stir up the Sluggos in the water. In response, a huge pseudopod composed of braided Sluggos lurched up, wavered in the air just long enough for Haldane to estimate the tens of thousands of hungry creatures that comprised it, then it dissociated in midair, creating a rain of hungry Sluggos that fell onto the Far Horizon.

Haldane had found shelter under the bridge wing, but he watched the crew get slaughtered. He had emptied both of his sidearms, and he had no other defenses but his bare hands and his boot heels. The squirming aliens came at him like an unstoppable invertebrate tide. . . .

No one in the EPN had had more direct experience with the Sluggos than Admiral Bruce Haldane. He had studied their movements firsthand in three engagements now, seen how they attacked. He made mental notes. Even though he didn't understand what he saw, his knowledge was irreplaceable. If Earth was going to win this war against the undersea invasion, he had to survive.

The overburdened destroyer was groaning, listing to starboard, clearly taking on water from belowdecks. The pounding Sluggos had chewed and torn through the lower hull and were even now swarming through the breach, infesting the ship even faster than seawater could fill it. Damage control crews had been devoured as they rushed to respond. The destroyer was going down.

As he backed against the bulkhead, he watched hundreds of Sluggos burst through the hatches, huge maggots writhing up the ladders and spilling onto the deck. Even with the din of gunfire, explosions, and shouts, Haldane could hear them moving around in the compartments below, feasting.

Then they came toward him.

Most of the Far Horizon's crew had been slaughtered already, but Haldane stood straight and proud, facing the alien enemy. He owed it to the brave men and women who perished here: He would stay until the very last as the hordes of fleshy bodies and chewing mouths squirmed toward him. He kicked at the Sluggos, but more and more came.

The admiral raised his voice and announced to anyone left on deck who might be able to hear him, "I want to thank you all for your service. Your lives will not be lost in vain."

As the Sluggos swarmed over him, Haldane reached behind his head and hit the transfer pendant embedded at the base of his skull. His escape hatch.

He was going to miss this body, which had served him well for the past six weeks, but he gave little thought to the volunteer seaman who would transfer with him at the last moment. If Admiral Haldane timed it right, the volunteer would feel only a few seconds of pain as the Sluggos devoured him.

It was what the volunteer had signed up for: He was just cannon fodder, and he had played the odds. Haldane couldn't even remember his name. Now it was time for the man to do his duty so that the valuable, experienced naval admiral could live to fight another day.

Haldane felt the alien jaws rip into his flesh. The pain was horrific, and he was glad to be out of that body.