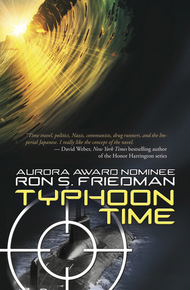 RON S. FRIEDMAN is a Calgary Herald #1 bestselling author whose short stories have appeared in Galaxy's Edge, Daily Science Fiction, and in other magazines and anthologies. His story GAME NOT OVER was a Best Short Fiction finalist in the 2016 Aurora Awards, Canada's premier Science-Fiction and Fantasy awards. Ron co-edited three anthologies and he received ten Honorable Mentions in Writers of the Future Contest. Most of these stories can be found in ESCAPE VELOCITY short stories collection. Ron calls Calgary his home. He is a senior analyst in the telecommunication industry with dual citizenship, Israeli and Canadian. Ron came from a family of Holocaust survivors. He served in the Israeli Air Force as an intelligence NCO. Part of the fiction was inspired by the experiences of his grandfather during WWII.

ERIC SOBOL, a terminally ill holocaust survivor billionaire, learns of a wormhole that leads back in time to 1938, and he decides to do everything within his power to change the past.

Thanks to their efforts, a modernized Russian Typhoon-class nuclear submarine jumps the time barrier and appears in 1938, manned by 21st century multinational experts and equipped with the best technology money can buy. But when a saboteur steals a nuclear warhead and delivers it to the German navy, all of history is at stake. As the crippled Typhoon is ambushed by a U-boat wolf pack, Hitler contemplates how to use his newly acquired weapon to make all of Europe fall to the Third Reich…

Oh shit oh shit oh shit. Professor Martin Richter fiddled with the frayed fabric of the fresh bullet hole in his tweed jacket. How did Eric Sobol convince me to join this lunacy?

Alarms sounded. Dim, red light flooded the control room. Crewmen rushed to take their positions. Russian syllables rolled from the speakers all around as the Typhoon-class submarine prepared to enter the wormhole.

Martin looked to Vera Pulaski for a translation, and so did Steve T. Stiles and Eric Sobol. Of the four Americans who were invited to the control room, Vera was the only one who spoke Russian.

"They have detected a bomber on an interception course," she said. "The captain gave the order to dive. We have less than four minutes."

This is a mistake, thought Martin. I'm not the adventurous type. What was I thinking when I signed up for this suicidal experiment?

Martin always knew himself as the kind of person who remembered historical events. He could recount when Dr. Martin Luther King Jr. was assassinated. He could recall the date Dr. Albert Schweitzer won his Nobel Peace Prize and when the demonstrators toppled President Mubarak from office. So, even if he forgot certain dates once or twice, he could still claim to be a person who was passionate about history.

But describing himself as a peaceful, non-adventurous sort, while standing on the bridge of a nuclear submarine about to enter a wormhole in a desperate attempt to violate the laws of physics and travel back in time?

Evidently, that specific self-assessment will now have to be revised. I can't really claim I'm not a militaristic risk-taker, in the same way that Marcus Junius Brutus couldn't claim that stabbing Julius Caesar on the Senate floor wasn't like him. I guess, deep down, I'm not exactly who I thought I was.

A strange buzz filled the control room as a new image appeared on the main screen. A black and blue sphere, surrounded by dark clouds and electrical sparks filled the monitor. The way the dark sphere spun, devouring the ocean in its path, was both awe-inspiring and horrifying.

Cold sweat trickled down Martin's forehead. He could barely stand up straight. What are our chances of surviving the wormhole? He didn't think they were attractive.

Martin stared at her in silence. He was probably more terrified than she was. Mechanically, he lifted his shaking arm and put it around her shoulders.

"Don't worry," he said to comfort Vera. His mouth was dry. He cleared his throat. "It'll be over soon. In a few seconds, we'll cross the 1938 threshold." He doubted he convinced her. He didn't convince himself either.

Someone tapped on Martin's shoulder.

Martin flinched. He nearly had a heart attack. Thank God Vera had been there to support him.

"This is so wicked!" He heard Steve's voice. He turned and saw a grin spread across Steve's face.

"Have you ever seen anything so cool?" Steve pointed at the wormhole image. "The first dudes in history to travel back in time. Boy, that's what I call a thrill."

Martin wondered if Steve had lost his mind. They were staring at certain death, and Steve found the prospect exciting?

The sphere was now clear of smoke and electrical discharges. Caribbean water slowly poured into the rupture like honey into a bowl. The inside was black. Was Eric successful after all? Could this bubble really lead to 1938 Earth, or was the wormhole's dark entrance their death sentence?

"That's a good sign." Steve stared at the monitor. "The submarine's propulsion should work on the other side." He made the victory sign with his fingers. "Let's rock 'n' roll!"

As the submarine began to submerge, Martin held his breath. The crew seemed nervous.

The dark blue globe grew bigger. Then, the monitor turned black. Martin tensed. He forced himself to breathe; in, out, in, out …

"We've just crossed the threshold," Steve announced. "Do you feel anything?"

"I feel like I'm about to throw up," replied Martin, gazing at the black monitor.

"I mean the smooth motion." Steve shrugged. "I wonder if it's normal. I expected some kind of rumble or shake, something more … grandiose."

The image of the Caribbean Sea slid back to the center of the screen. The operator must have turned the camera backward. They were looking at Earth from the inside of a wormhole.

"What's that?" Back on the contemporary Earth's side of the wormhole, something white was entangled with the rear cable line which fed power to the ultra-capacitor on Eric's yacht. The same yacht that had brought them to the submarine and carried all the scientific equipment which made time travel possible.

"NO!" Eric cried in horror.

That was the first time Eric Sobol, the cold-blooded eighty-four-year-old billionaire, had lost his composure. Something was wrong—very wrong.

"No, no, no!" Eric rushed to the monitor. "Without the external power cable, the Casimir plates will fail."

Martin didn't know much about the technical aspects of time travel, but he knew that this cable was critical to keep the wormhole open.

"Who cares about the damn Casimir effect?" Steve's voice was still cheerful. "We're already inside the wormhole."

"You don't understand." Eric's voice dropped to a whisper. "If the Casimir effect fails, the wormhole will collapse." The cane in his hands shook like a leaf. "A collapsed wormhole turns into a black hole. We will be trapped inside it."

Nausea churned Martin's stomach. It took him a few seconds to realize that his feet had left the floor to set him floating. He wasn't the only thing floating. Paper clips, pens, chairs, and other pieces of furniture joined the cloud to slowly swim in random directions.

Vladimir Satarov, the captain of the Russian submarine, shouted something incomprehensible. Immediately, illumination flooded the submarine's external deck. There was no trace of the blue sphere.

"Yuck." Vera covered her face. She maneuvered closer and pulled out a tissue from her purse to help him clean up. "Is there anything I can do to help?"

"At least we're not eating in the mess hall," chuckled Steve. "Imagine a dozen sailors throwing up and trays filled with food floating around? Gee, I hope soup wasn't on the menu."

The lights went out. Someone shouted in Russian. Two seconds later, red lights came on. The Russian crewmen continued to yell at each other.

The captain shouted at his crew before he finally paid attention to the four Americans. "The reactors went into emergency scrum," he said in a thick Russian accent. "We lost secondary loop. We don't have seawater to cool primary coolant. The sub is now running on batteries."

Steve kicked the wall and steered his body toward one of the panels. "Watch for flying objects; especially sharp tools." He barely dodged a drifting chair that missed his head by an inch. Steve was probably the only person on this submarine who knew how to handle weightlessness.

Vera rolled through the air. "Am I dreaming? I always wondered what being an astronaut would feel like." She looked at Martin. "Are we in space? Is this for real? I feel I'm about to wake up."

Martin wiped his mouth, unable to look away from Vera. How she gracefully stirred through the air. How her chestnut hair drifted. She seemed to enjoy microgravity. Then he noticed a new image on the monitor. "Holy smoke!" He gripped the railing tightly. Weird-looking balls floated above the outside deck. The transparent football-sized balls constantly vibrated and changed shape, and they smoked like hell. It was like the sub was accompanied by a bubbling haze.

The dancing balls turned into white smoky clouds, which gradually started to condense into floating snow-like piles. Martin stared at the weird phenomenon. Then the smoke-snow clouds began to move downward. Slowly at first, then they accelerated.

A clanging noise was heard. Martin sensed his feet gently touching the floor. The floor was littered with broken mikes, pens, cups, laptops, papers, and a couple of tablets. Although he felt nearly weightless, they now had gravity.

"Shut down the engines!" Steve shouted.

The engines? Martin noticed a high-pitched shrieking sound. Propellers spinning through water generated drag and resistance. However, if the propeller was out of the water … Martin exchanged looks with Steve.

"Turn them off!" Steve screamed at the captain. "Without cooling water, the shafts will overheat."

Satarov shouted orders at one of his crewmen. The seaman's face turned as white as Eric's yacht. He saluted and pulled a lever on his station. They heard a rumble, a hiss, and then the high-pitched sound ended.

"Those balls we just saw," Steve said, pointing at the monitor, "were made of water. Ocean water that entered the wormhole with us. This is how boiling water behaves in space."

There was a momentary stillness on the bridge. Martin sensed the tension in the air. He had expected to enter the wormhole and immediately appear in 1938. Instead, they found themselves lost in space, stranded at the end of the universe, inside a seagoing submarine running on nearly drained batteries. How the hell did he allow Eric to drag him into this?