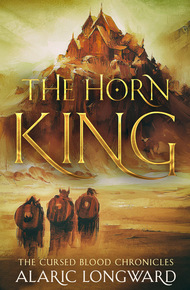 Alaric Longward is a dad to two wild vikings and a husband to a goddess. He writes stories.

To learn more about the stuff he dabbles in, visit: www.alariclongward.com

The Horn King by Alaric Longward

In the world of Aldheim, humans serve the great elven houses faithfully, or die.

If you are a human who happens to hate elves with a passion, no other job is better in Aldheim, than that of an assassin.

Gutty is very good at this job. He and his team of misfits execute their contracts not only with skill, but passion.

And yet, even such a talented killer can occasionally go too far, and so, Gutty is faced with a choice. Serve your enemy elf on a suicidal mission, or get booted from the guild, and be hunted by everyone.

There is no choice. There is no discussion. Gutty sets out to find a lost, perilous treasure with his new elven masters, who know a great deal about him. Soon, they find themselves in a trouble few humans, or even elves could survive.

And yet, Gutty is not exactly a human. Not strictly, that is.

Alaric's books are dark, historical fantasy at its best. Stuffed with detail drawn from ancient mythologies, full of rousing battle and warfare and led by brutish heroes, these are dark, gritty and gripping tales of adventure, politics and war. – Charlotte E. English

It was raining heavily in Trad. The droplets hammered the roofs above and made dark puddles in the streets. I didn't mind, though my friend Oxam, his wide stubbled chin dripping, was huddled on a barrel, looking miserable as a bathed dog.

"I thought you packed my cloak," he complained. I shook my head. He was forever losing his gear and I had long given up trying to keep track of it all.

There was nothing unusual about heavy rain during the month of Amber. There was rarely snow, except far in the north, but plenty of rain from the sea. People and elves took it all in stride. Most stayed indoors, but the ones who ventured out were well prepared with boots, cloaks, and in the case of some elven nobles, most of them delicate females, with wide screens carried by liveried servants. Few of those ventured to the hill we were skulking on, but some did, and I looked after them with contempt.

We didn't get along.

Rain was an ally to make even a fanciful, thick-haired, bright-eyed, fabulous elf look like a wet rat. I found I liked the look.

Despite my comfort with the pouring rain, I knew that year's was different. The Wind Sages, sitting in the Spell-Tower of Trad, had predicted there would be heavy snows surging over the land and the winds were likely to blanket even some of the southern lands with surprising amounts of sleet. The foul weather would arrive from the north and fill the horizons with month-long cold. I wondered how Serpent's Run, the island strings east of the Freyr's Seat, would fare since the towns and cities there were not ready for such weather. The sailors were still in the business and far from ready to end the raiding season.

No, pirates, one called them and that they were. I knew them well. Had I not spent years and years in the service of the Children of Aegir?

They'd survive, I decided. Some crews would drown, but perhaps not many. They knew the weather well enough up there.

"Gods curse all the water and let it wash into Odin's throat," Oxam moaned as wind whipped in the alley, making us both shiver. "Let him sputter and drown."

"To think you once oared a galley in the north," I said thinly. "We were all wet all the time. We slept in puddles. Shut up, friend."

"Let him drown," he added stubbornly. I grinned at him, shaking my head.

Serpent's Run. That's where I had met Oxam. Pirates both, our present business suited us well. We were there to do a dark deed and the weather was an ally. It kept people from giving us too much attention. We wanted none. I watched the people passing by. Humans endured the weather with curses, most elves with boredom, and all missed the golden light of Mar that was hidden behind the offending banks of mountain-high clouds. Some of the elven bastards who passed did take note of the beauty and power of raging, overflowing rivers that made travel hazardous in the countryside.

A minstrel was passing. He was speaking to his human servant and I grimaced as I heard him speaking. "The lake Ularria, you know it? The silver surface and gray rain swirling together as the droplets struck the surface. Then Mar, peeking for just a moment from the clouds, lighting it all on orange fire. Oh! It looked like the Goddess Freya shed her amber tears on the land! Listen. Here is a poem I made of it."

He proceeded to burden the man's ears with the poem. A servant he was, the elf a master, and that's the way of life in Aldheim, if you are lucky human. A poem is better than a whip, I allowed.

In any case, I had to restrain myself from walking after the elf and kicking him down the street. Elves were like that, appreciative of beauty in all its forms, yet most humans knew there was also other traits that lay under their golden-hearted love for arts and beauty.

They were cruel bastards, very good at the art of making war, and greedy for loot and glory. Most would sacrifice a human for either without blinking an eye. The elf with his poems would likely push his servant to a sever if he could see the fiery lake of his poem again.

I was no plaything to elves.