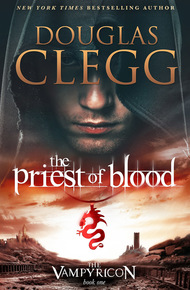 Douglas Clegg is the author of more than 30 books, including the NY Times bestseller The Priest of Blood, Neverland, and Night Asylum. His research for The Vampyricon trilogy (of which The Priest of Blood is Book One) began in his early twenties when he spent time in a forest in Brittany which spawned the original idea, and then over the years, lifelong studies in world mythology and medieval history, all of which helped form the basis of the dark fantasy epic.

Published by various houses (Simon & Schuster, Bantam Dell Doubleday, Penguin Berkley, and Dorchester among others) beginning in the late 1980s, Clegg was an early ebook pioneer and innovator when, in early 1999, he launched the internet's first e-serial novel. The book, Naomi, was called by Publisher's Weekly, "arguably,the first major work of fiction to originate in cyberspace." This innovation landed features or interviews with Doug in Time Magazine, BusinessWeek, Publishers Weekly, Stern, and many other periodicals.

Clegg and his husband have been together for just shy of 30 years and currently occupy a house with a garden of mythology out back along the coast of New England. You can learn more about Doug and his novels by visiting his website at DouglasClegg.com and subscribing to his long-running free email newsletter.

The Vampyricon - Book 1 - The Priest of Blood by Douglas Clegg

The man known as Falconer was born of a whore, served the royal court as a predator trainer, and warred against the infidel Saracens as a conscripted soldier in the Holy Land. But it wasn't until he found himself in the arms of a creature called Pythia that he was truly born into his destined role-that of vampire...

Sing to me, Falconer, of what was and what shall be. Blow the victory ram's horn and recall the destiny to which you were so cruelly taken.

How you came to us in the night of your soul's despair, on the rocky ledges and fallen citadels of the eastern kingdoms. Roar the story of the warrior-youth from the West, who came to plunder the treasures of Antioch and Kur-Nu and was himself plundered...

Here is the story that has been kept secret for more than eight hundred years, suppressed by the Keepers of the Veil, hunted by the humans who came after the Falconer, and buried by those he most trusted.

The shroud of history is upon humankind and those born of the Serpent as well, and all has been lost from the past, but you will invoke it now that it might live—

Speak the prophecies of Medhya, and of the secret wars that would not have begun without the appearance of the Maz-Sherah—

And remember the tale of the Priest of Blood, who brought you to this desolate and wretched and noble state...