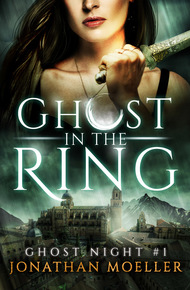 Standing over six feet tall, USA Today bestselling author Jonathan Moeller has the piercing blue eyes of a Conan of Cimmeria, the bronze-colored hair of a Visigothic warrior-king, and the stern visage of a captain of men, none of which are useful in his career as a computer repairman, alas.

He has written the FROSTBORN series of epic fantasy novels, and continues to write THE GHOSTS sequence about assassin and spy Caina Amalas, the CLOAK GAMES urban fantasy books, and numerous other works. His books have sold over a million copies worldwide.

Ghost in the Ring by Jonathan Moeller

Caina Amalas was once a deadly Ghost nightfighter, a spy and agent of the Emperor of Nighmar. Now she only wishes to live quietly with her husband.

But civil war grips the Empire, and Caina's skills are needed against the cruel sorcerers of the malevolent Umbarian Order.

And Caina has a dangerous connection to the Umbarians.

For Caina's mother had many secrets, secrets that might yet kill Caina herself...

Ancient history lends itself well to dark fantasy re-imaginings, and Ghost in the Ring offers us werewolves, a civil war and a lady spy to boot. How could I resist that? Jonathan is amazingly prolific; if you love this book, there are many more ghost adventures to enjoy. – Charlotte E. English

The stairs turned, and Caina slowed, peering around the corner.

A battlefield greeted her.

The steps ended in a small stone hall, and at the far end were a pair of massive iron-banded wooden doors that glowed with sorcerous power. Dead Adamant Guards and destroyed undead creatures lay scattered across the floor. Caina saw three of the robed creatures she had seen earlier, their features misshapen, their corpses leaking black slime.

Two Adamant Guards were still on their feet, broadswords in hand, though both men had taken wounds.

Am Umbarian magus stood with them.

The man could be nothing else. He was in his late thirties, with gray-shot black hair, hard brown eyes, and a thin, humorless mouth. He wore the black leather greatcoat favored by the Umbarian magi. To the sixth sense of Caina's valikarion sight, the coat shone with the sorcerous power of spells designed to make the material as strong as plate armor.

"We are almost there, sir," said one of the Adamant Guards. "It must be behind those doors. Else those creatures would not have put up such a fight."

The magus gave an irritated shake of his head. "But I can't get through the blasted wards on the doors. If the provost wants the damned thing so badly, she can come and get it herself."

Provost? Caina knew that the Umbarian Order was led by five provosts. Was one of them there?

"Magus Morett, we were commanded to take the ring," said the Guard.

The magus, evidently named Morett, scowled at him. "And you are welcome to do so. Go try to open those doors and see what happens."

Neither Guard leaped at the opportunity.

"We know the way to the chamber," said Morett. "We'll go back, get the provost, and she can break the seal on the doors."

"The fortress may not remain here that long," said the Guard.

"Then she can summon it back again with that precious amulet of hers," snapped Morett. "I thought this entire plan was folly. We have lost valuable resources dealing with those creatures." He kicked one of the robed things in sheer frustration. "Now, move."

The magus strode up the stairs, and the two Guards followed him.

Caina eased back around the corner, her mind racing. She had assumed the Umbarian Order was here to kill her and Kylon, but what if it was just a coincidence? Morett said the Order had come here to find something. Apparently, those robed creatures, whatever they were, didn't want the Order to have it.

So how had Caina gotten tangled up in all of this?

But she had a more immediate problem. In about three seconds, Morett and the two Guards would come around the corner, and she had no place to hide. Caina stepped to the center of the stairs, flexing her right hand as she prepared to call her valikon.

She would have to be quick.

Morett and the Guards came around the corner and froze in alarm as they saw her. To Caina's surprise, a flicker of recognition went over the Umbarian's face. Had she met him somewhere before? No, she had never seen the man, she was sure of it.

"Provost," said the Umbarian. "I didn't realize you would enter the fortress in person. We've located the relic, but I cannot breach the wards upon the doors to the vault. I…"

"Identify yourself!" said Morett, raising his left hand. He didn't have one of the black gauntlets that let a Umbarian magus use pyromancy safely, but she saw the power as he drew together arcane energy for a spell of psychokinetic force.

"My name's Natalia," said Caina. "I don't know how I got here. I woke up in some dusty library, and…"

"Rubbish," spat Morett. "Look at you. You're obviously yet another one of the provost's damned relatives. Are there no end to them? Does she think to play games now of all times?" He scoffed. "She's gone too far." He released his spell of psychokinetic force and began another. Caina recognized it as a spell to break into the thoughts of another. "Let's compel the truth from you, shall we?"

"Please, sir," said Caina, stumbling as she backed away. "Please, I don't understand what is happening, I…"

"Kill her if she runs," said Morett.

Caina went motionless, making herself tremble with fear. It must have been a convincing performance, because the magus strode up without hesitation, put his right hand on her forehead, and cast his spell. She felt the surge of power as Morett's spell reached for her mind, and she saw it around his fingers as a flare of gray light.

It didn't do anything.

She was a valikarion. Mind-affecting spells could not touch her.

"What?" said Morett. "That doesn't make any sense. Why didn't that work? What…"

His eyes went wide, and he stepped back, beginning another spell.

"Kill her!" he shouted. "She must be one of those damned Temnoti! Kill her now!"

The Adamant Guards stepped forward, and Caina had no choice but to act.

She jumped after Morett, calling her valikon as she did. The blade coalesced in her hand, and Caina stabbed before the magus could dodge. The valikon sliced through the spell-armored coat and sank between his ribs, and Morett staggered back, collapsing to the stairs with a choked scream as his heart stopped.