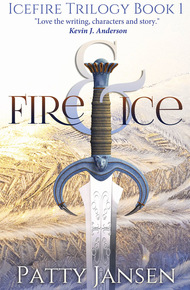 Where magic is dark and gritty, characters troubled and twisted, and victory comes at a heavy price.

Deep under the City of Glass in the frozen southern land, an age-old machine called the Heart of the City radiates a power which locals call icefire. Most citizens are immune to it, but a few, always born with physical disabilities, can bend it to their will. For fifty years, the ruling Eagle Knights, who fly on the back of giant birds, have killed these Imperfects, fearing the return of the old royal family, who used icefire to cut out people's hearts, turning them into ghostly servitors.

The old king's grandson Tandor only sees the good things icefire brought: power and technology now forgotten while the people of the south live in dire poverty. He's had enough of seeing his fellow kinsfolk slaughtered by ignorant Knights, of Imperfect babies being abandoned on the ice floes to be eaten by wild animals. His grandfather's diary tells him how to increase the beat of the Heart the first step to making the land glorious once more. Arrogant as he is, he sets the machine in motion. All he needs is an army of Imperfect servitors to control the resulting power.

Isandor is Imperfect, an ex-Knight apprentice, betrayed by his best friend and running for his life.

The queen Jevaithi is Imperfect, living like a prisoner amidst leering Knights, surviving only because the common people would rebel if their beloved queen were harmed.

Both are young and desperate and should be grateful that Tandor wants to rescue them from their hopeless situations. Or so he thinks. The youngsters, however, have no inclination to become heartless ghosts, but while they defy Tandor, the Heart beats, and he alone cannot control its power.

This will appeal to readers of Joe Abercrombie and George R.R. Martin.

No fantasy bundle would be complete without a dash of the epic, and Patty provides plenty with the first book in her Icefire series. Layered with complex characters, gritty worldbuilding, politics and action, this book opens the trilogy with a bang. – Charlotte E. English

SOMEWHERE NOT FAR from the edge of the plateau, where the goat track snaked up the rock-strewn slope, the rain had turned to snow.

Cocooned in his cloak, his view restricted to the swaying back of the camel, Tandor failed to notice until a gust of wind pelted icicles into his face.

He whipped off the hood and shook out his hair. The breeze, crackling with frost, smelled of his homeland. Oh, for a bath to wash off the clinging dust and the stink of the prairie lands, steam trains and the bane of his existence: this grumpy camel.

To his left, the escarpment descended into the land of Chevakia, its low hills and valleys bathed in murky twilight. To his right, the dying daylight touched the forbidding cliff face that formed the edge of the southern plateau, accessible only to those who knew the way.

Something flashed where the ragged rocks met the leaden sky. A tingle went up Tandor's golden claw, pinching the skin where the metal rods met the stump of his arm. Icefire.

He peered up, shielding his eyes against the snow. Golden threads of icefire betrayed the boy's presence, flooding Tandor with feelings of relief, urgency, panic.

Wait, wait, Ruko, not so fast. Tell me what's going on.

There was no answer, of course. Ruko conversed only in images, and Tandor needed to be close to the boy to catch those.

But Ruko's emotions had spoken clearly enough. By the skylights, something had happened while he was away. He flicked the reins to jolt the camel into a faster pace. The animal grumbled and tossed its head, but did as it was told.

Ruko waited at a rocky outcrop to the left of the path, seated cross-legged in the snow: an ethereal form, his skin blue-marbled, his brooding eyes black as a low-sun night. His chest shimmered where his heart should be. A lock of hair hung, dark and lanky, over his forehead; he shook it away in an impatient gesture.

Tandor slid off the camel's back.

He held out his two hands, one of flesh, the other a golden claw. Come.

Ruko rose, towering at least a head over Tandor.

By the skylights, did that boy ever stop growing? While Tandor had been away, he had discarded his soft childish look for planes and angles.

Ruko put his hand in Tandor's. The intense cold of it made Tandor gasp, but he steeled himself and sent a jolt of icefire into Ruko's arm.

The image of the two hands, the live one and the blue one, faded for a scene of chaos. Huge birds with tan wings, white heads and yellow beaks swooped down on the village, carrying Eagle Knights in their traditional red tunics and short-hair cloaks, the swords on their belts clearly visible. They landed their birds in front of the guesthouse, jumped into the snow and ran to the houses, banging on doors, dragging out occupants. Adults, children.

"What, Ruko? What happened?" All those children Tandor had saved. He thought Bordertown was a safe haven, no longer frequented by merchants, no longer of interest to the Eagle Knights.

Images flowed through Tandor's mind. Snow crunched under his feet as Ruko ran from the village, while screams from women and shouts from men echoed. Trees flashed past. Crossbow bolts thunked into wood. And later, coming back to the main square, empty, except for deep tracks in the snow and a single child's mitten.

Ruko's shoulders slumped. There was a brief glimpse of the red-cheeked face of a girl, smiling, accompanied by shame and grief.

Tandor pushed Ruko's chin up. "No, Ruko, it's not your fault."

If anything, it was Tandor's. He had left the boy alone. But he couldn't have done otherwise; he had needed to travel to Chevakia, and Ruko couldn't leave the southern land. Across the border, where there was no icefire, Ruko would simply cease to exist.

"Being angry with me doesn't help. What can I do about it?"

Ruko's fury burned inside him: his screams for his girl who was being dragged away by a Knight. His pounding on the Knight's back with insubstantial fists. Without the presence of the master, a servitor was little more than a ghost.

Ruko reached towards Tandor's belt for the dagger and the Chevakian powder gun.

"No—you're not to kill anyone. Stay here. I'm going into town to see how many children they took." There had better be some left, or his plan was in tatters.

Tandor swung himself back in the saddle. "Behave yourself." In case the order wasn't enough, he let icefire crackle from his clawed hand. Golden strands snaked around Ruko's legs and then into the snow.

Ruko glowered at him.

"Behave, and you will get your revenge, I promise."

He flicked the reins and the camel turned towards the town.