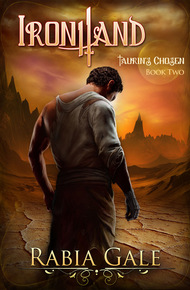 Rabia Gale creates weird worlds full of magic and machines and writes about flawed protagonists who never give up. She is fascinated by light and darkness, transformation and redemption, and things that fly. Her books include the Taurin's Chosen duology, The Sunless World series, and the standalone Rainbird. She is currently at work on a gaslamp fantasy series set in a Regency-esque world.

A native of Pakistan, Rabia now lives in Northern Virginia where she reads, writes, eats chocolate, avoids housework, and homeschools her children.

It's not over yet.

Kato Vorsok closed the Gates and sealed in the enemies of all mankind. Now he's stranded in the desert with a ragtag army of supernatural creatures far from home. Keeping order and finding provisions are the extent of his problems.

Or so he thinks.

Deep in the salt, an ancient demon from a mythic past stirs. Once, angels walked the world and battled such monsters, but they've been gone a long time.

Now there's only Kato, a reluctant hero with no illusions about himself, and Flutter, a woman-turned-demon who's falling apart.

They won the battle, but will they lose the war—and the whole world with it?

Okay, I admit it, it was the covers that got me at first. They're mesmerising. And so are these stories. Lyrical prose, a pair of fallen heroes to root for, and a luscious dark fantasy world. They are, as others have noted, hidden gems. – Charlotte E. English

Operation Shiknai—Glory, in the language of the Taurin-worshippers—was a failure. But then it had always been a long stretch.

The Highwind scout lay on his stomach atop the ridge and peered down at the valley of Tau Marai through his binoculars. The mechanical pieces of its ancient guardians lay scattered about like broken toys, interspersed with the groaning bodies of the army Sera Vorsok had led against them. Dark stains dotted the ground.

Sera Vorsok was dead and her project with her. For four years, Highwind had supported the foreign woman's scheme to destroy her people's old enemy, break open the city of Tau Marai, and steal its treasures. Highwind had helped fake her death, and hidden her as she worked. She'd been given funding and equipment: all the support needed to engineer a cohort of Highwind's supernatural creatures into super-soldiers. Mourning cloaks and wind swifts, eerie men and night walkers—all had been modified for this fight. The higher-ups had even turned a blind eye as the woman wreaked vengeance on those of her people she believed had betrayed her.

The scout grimaced, remembering certain missions. He'd been prepared to get his hands dirty in his type of work, but kidnapping scared women and dragging them back to Highwind to be stripped of their humanity hadn't been part of his expectations.

Still, Sera Vorsok had come close to achieving her goals.

The scout scanned the valley, pausing at a weary, defiant figure, grimly pushing himself from one broken, bleeding body to the next.

Kato Vorsok, still going even after the day's betrayal and battle, and despite losing his right hand.

He'd been a surprise.

Sera Vorsok had spoken dismissively of her husband as someone who'd lost his fire after his defeat in this very valley several years ago. He'd fled to Highwind with his wife, and dwindled into a mere drinks' shop owner. Kato would be no threat to their plans.

Sera had misjudged. One of her victims—a woman turned into a demon—had escaped the laboratory and made her way to Sera's husband. Kato Vorsok had finally woken from his malaise. This was the man, after all, who was the Chosen of the southerners' god, who'd been lauded and hailed as the Champion of these lands.

Today, the scout had seen Kato transform his own body into a weapon, skin hardened to iron and sword blazing as an extension of his arm. Single-handedly, he'd taken down a swarm of giant acid-spitting flying beasts.

And when Sera Vorsok died opening the Gates of Tau Marai, it was Kato Vorsok who closed them.

The scout pulled a cylinder from his belt and popped the cap open with a flick of his thumb. A hiss, and a golden scroll slid out. The scout stretched it flat with his left hand—it felt uncomfortably like warm skin—and wrote with a stylus. No words appeared, but the parchment grew more alive, edges curling in impatience, hues of brown and yellow and orange shivering through it.

The scout placed his thumbprint at the bottom of the missive and lifted his hand. The released creature—both messenger and message—scuttled away, blending into the desert landscape. It was soon out of sight.

The scout wriggled backward, away from his lookout position. He'd watched, and he'd reported.

Now it was up to the Director to make the next move.