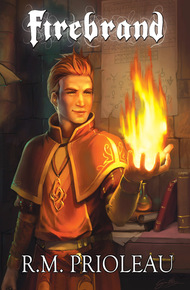 R.M. Prioleau is a game designer by day and a dangerous writer by night. Since childhood, she's continued discovering new ways to expand her skills and creativity as she delves into the realm of literary abandon. R.M. is a NaNoWriMo enthusiast who has been active in the worldwide writing community since 2009.

Kaijin Sora behaved like any studious child his age who constantly indulged in reading books and thirsting for new knowledge. But there was one thing that distinguished him from other children -- his tenacious passion for fire. In hopes of curbing this strange and disturbing sickness, Kaijin's parents send him off to study magic. Unbeknownst to Kaijin, the knowledge he would glean during his years of intense study would only further kindle his inner flames. What began as a simple childhood curiosity would ultimately transition into a blazing love so powerful, it kills...  "Firebrand" is an engrossing fantasy adventure filled with magic and mystery.  *Book 1 of The Pyromancer Trilogy*

Magic is a major part of a fantasy series for me, and I've always been fascinated with how different authors approach not just the mechanics of magic but the elements that make for a skilled mystic. For this reason Firebrand is a joy to read, as it provides the reader with a young boy downright self-destructively obsessed with the naked flame, then illustrates how obsession plus direction equals mastery. – Joseph Lallo

The first rays of the morning sun coursed over the gates of Easthaven, promising another prosperous day in the trade city. Vendors and shoppers filled the streets, converging around the city's extensive marketplace. It was often boasted that Easthaven's marketplace attracted visitors from throughout the world to sample the rare and elusive goods. As a result, many used Easthaven as a hub for their travelers' and mercantile wares.

Kaijin stirred as the sunlight shone through his window and over his eyes. Hearing the outside bustle of the crowded streets, he lifted his face from his desk. Today not only marked the end of the week, it also marked Kaijin's most favorite day of all—shopping day. He smiled groggily. Ever since he'd learned to read, he loved visiting the booksellers. He stretched his arms, rubbed the remnants of sleep from his eyes then stared down at the thick book before him. A circle of drool stained one page while the other page, where his face had been nestled, was crinkled, rendering the list of terminology almost unreadable. He rubbed his cheek, feeling multiple imprints of the page's wrinkles in his tanned skin. He remembered what he had read before falling asleep—a book about magic. The arcane arts intrigued Kaijin, despite his struggles to understand the book's complex symbols.

Kaijin smoothed the page and scanned over the harder words, which he had circled. He recited sleepily, "Ab-ju-ra-tion ... Py-ro-man-cy ... So-mat-ic ..." He stopped abruptly when he heard his hungry belly make noises. Before getting up from his desk, Kaijin marked the page with a ribbon and placed the closed book in his haversack. Afterward, he washed his face, changed his clothes, grabbed the haversack, and hurried downstairs for breakfast. He found his mother stirring a small pot of porridge over a cooking fire.

Kaijin ran up behind her and wrapped his arms around her wide waist in an excited embrace.

His mother glanced down over her shoulder. "Oh! Good morning, dear." She chuckled and rubbed his fiery-red hair. "Are you ready for breakfast?"

"Mmm!" Kaijin simpered and gazed at his mother's protruding belly. Nearing thirty-two weeks, she sported the roundness of a healthy third trimester. The mysteries of creating new life through childbirth had been an unfamiliar, yet exciting fascination for Kaijin, who reached out and touched his mother's belly in hopes of feeling the baby move.

She watched briefly before placing her hand on his. "You're going to be a big brother soon, Kaijin."

He puffed out his chest. "I'll be the best big brother, Mama!"

She kissed the crown of his head. "I know you will, dear."

The back door slammed, followed by the sound of footsteps. His father, a tall man with thick red hair, entered the kitchen carrying an armful of sturdy, overflowing canvas bags. He greeted his wife and son with a smile before setting down the load. Bolts of cloth spilled from the top of one bag.

Curious, Kaijin skipped over to see what else the bags contained. He reached out to touch the cloth, and his father slapped his hand away.

"Hands off, boy." Ramon glowered at Kaijin. "Go help your mother with breakfast."

"Yes, Papa ..." Pouting, Kaijin returned to his mother's side and watched her add some cinnamon to the porridge mix.

"You're a good boy, Kaijin." She smiled reassuringly. "So helpful." She offered him a small taste of hot porridge from her spoon.

Kaijin savored the sweetened sample and beamed. It was just how he liked it—mixed thick with slices of apple. The porridge melted on the tip of his tongue, leaving a hinting aftertaste of cinnamon and ginger.

His mother resumed cooking and acknowledged her husband. "Ramon, dear, you're back earlier than usual. Are there no new prospects in the marketplace today?"

"On the contrary." Ramon smirked. "I think it's going to be a good day for business."

"That's wonderful to hear. Just ... stay away from the silk dealers this time, please." She made a face. "Last week, they nearly cleaned your purse with their boorish scandals."

Ramon rolled his eyes. "Stop reminding me, Elianee. Besides, you're always so critical of the Ankhram traders. Not all of them are bad, you know."

"Don't be so quick to judge just because you don't see eye-to-eye with a few of your relatives."

"They're just upset because I married you." Elianee mirrored his smirk. Like characters in books Kaijin had read, and the few stories she'd told him, his mother had all the features of a woman descended from the desert people: a tall, lean frame; soft, bronze skin; long, thick ebony hair; and matching ebony eyes that complemented her angular face.

"And I say, ‘they can all shove off.'" Ramon approached her from behind and wrapped his arms around her waist, his hands resting on her taut belly and massaging it soothingly with his thumbs. He glanced down at Kaijin.

Kaijin briefly locked eyes on his father before fixing them on the wooden spoon making figure eights in the porridge.

Elianee stifled a laugh and began spooning the porridge into three bowls.

"That goes for you too, boy," Ramon said. "Tell anyone who ‘disapproves' of you marrying a beautiful girl to ‘shove off!'"

Kaijin snapped out of his trance and regarded his father, eyes widened in fear at the man's sharp tone.

"Ramon!" Elianee elbowed him playfully in his ribs. She set the full bowls on a small tray, placed a spoon in each bowl, and handed the tray to Kaijin. "Your father is only jesting, Kaijin. Now, be a good boy and put this on the table."

"Yes, Mama!" The smell of the steaming-hot porridge filled Kaijin's nose as he carefully walked to the table, tray in hand. After putting the tray on the table, he glanced back at his parents, proud that he did not spill a single drop.

But his parents didn't appear to notice his accomplishment. Ramon turned and caressed the back of Elianee's neck with a gentle kiss. "Enough of that talk. How are you faring?"

Elianee blushed. She retrieved a pan of hot bread from the oven, took a knife, and began cutting the loaf into small slices. "I am well, dear." She playfully fed Ramon a slice. "You know, your son has been waiting for you to take him to the marketplace." She peered over her shoulder at the kitchen table and raised her voice a bit more. "I'm sure he would love to see some of the new vendors. Wouldn't you, Kaijin?"

Kaijin quivered with joy. He met his mother's gaze.

She winked at him in response.

Beaming, Kaijin ran to his father and tugged at his tunic. "Can we go now, Papa? Please? Please? I want to see the new book vendors! Please, can we go now?"