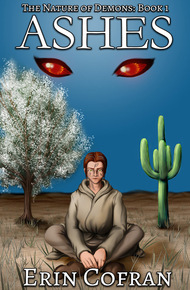 Erin is a phlebotomist and a freelance writer. She enjoys writing during National Novel Writing Month because deadlines and accountability help her finish projects. Ashes is her first published novel. She is a member of the online writing community Write On by Kindle. She has a dog named Nemo, and lives in Colorado. When she's not writing, she's reading, baking, or walking Nemo. Her current project is a sequel to Ashes called Heartmask.

A mage traded his soul to the Greater Nop Demon Erantonop for a spell, and lost his name and half his memories to boot. His only hope of regaining his former life lies deep in the heart of the Weylin Forest, in the abandoned Temple of Corallyre. On the Spring Equinox, the Greater El Demon Onohiel is said to grant a boon for those brave enough to face packs of carnivorous shape-shifting blight worms and the heavy spring rains that flood the river protecting the temple every year. Joined by his companions Bladehand the swordsman, Nightjewel the healer, and the young thief Leafdancer, they travel through the forest to seek Onohiel's aid in getting his soul and his memories back. But all is not as it seems. Erantonop seems to be manipulating the mage, but for what purpose? Bladehand rescues a woman named Phina from the river whose memories are also gone, but where did she come from, and how is she connected to the mage? Was she sent by Erantonop for a sinister purpose? The mage and his friends struggle to find out before Erantonop gets tired of toying with him and ends the game.

We’ve all read books that build the world from scratch for the reader, laying out a long history and a web of relationships as the story progresses. For Ashes, Erin took a different route. The cast and setting are easily among the most vivid and imaginative I’ve read in years, but we’re dropped into a tightknit group in the middle of a journey, and we learn of their history and purpose through clues and hints. I think fancy literary types would call this In Medias Res, but I just call it entertaining. – Joseph Lallo

Nightjewel smiled, squeezing her arm. "I wonder if you might..." she trailed off, hesitating. "I mean, we are too close to his memories. He won't want to see us for a while. Would you please go after him, just to make sure that he's all right?"

Her dark eyes were pained, and she bit her lower lip, unable to meet Phina's gaze.

"Of course," Phina said, just to make that terrible expression on the other woman's face go away. Nightjewel was a wonderful person, and despite just having met her, Phina couldn't bear to watch her suffer.

"Thank you, Phina," Nightjewel said, relieved. "I worry about him so much."

"We all do," Bladehand rumbled, his eyes downcast.

"I'll go check on him," Phina said, and turned to walk out after Ashes.

This was a stupid idea, she realized once she left the light of the fire behind. There was some faint moonlight just outside the cave, filtering through the canopy of trees above, but she had trouble seeing the path under her feet. How would she find Ashes like this, if she couldn't see?

Well, at least she had had the forethought to put Leafdancer's shoes back on before she left the cave. They didn't fit very well, as they were just a little too wide for her feet, but they were better than nothing. Wearing only the mage's shirt made her feel vulnerable and exposed. She tugged on the hem to pull it down, but it didn't really help.

A bright yellow flash of light filled her vision, blinding her momentarily. She gasped and stepped back, and something rattled and hissed at her feet. She paused, blinking the residual light away, wondering what it was. A hand closed over her arm, yanking her to one side just as something shot past her leg. She yelped and stumbled against someone, twisting her left ankle sharply.

"Ow!" Her borrowed shoe went flying, and she fell into someone's hard chest. It knocked the wind out of her for a moment.

"Phina," said Ashes, sounding startled. He conjured a magelight and Phina blinked gratefully in the sudden glow of light. He extricated himself from her gently, supporting her when her knees weakened. "I'm sorry. There was a snake that you almost stepped on. It tried to bite you. Are you all right?"

"Ah, ow...er, yes," she said, shifting her weight off her twisted ankle. So that was what that odd noise had been. But what was the yellow light? Would he be able to tell her?

He frowned at her. "You're injured. I'm sorry."

"It's really nothing. The pain is already going away." That was a pointless lie. She didn't want to burden him, though she wasn't sure she would make it back into the cave without help.

"I can carry you back inside so that Nightjewel can look at your ankle." Did she imagine the reluctance in his voice? He still seemed a little shaken up by the memory the demon returned to him.

He looked at her, letting his eyes trail downward to her left ankle, then back up to her face. Her cheeks warmed a little. She straightened her borrowed shirt and again pulled it down over her thighs. Then she told herself not to be stupid, but that didn't help either.

"Here, you should sit down," he said at last. He lifted her easily by her waist and set her on the trunk of a fallen tree. She marveled at the strength in his wiry frame, and shifted to a more comfortable position as he sat down beside her, handing her her missing shoe. She took it from him and put it back on. The magelight dimmed a little, and he looked up at the stars in the small patch of sky they could see.

"I don't want to talk about it," he said in a low, strained voice.

"That's fine. I just wanted to make sure you were okay," she replied. "Nightjewel was very worried."

He nodded, but said nothing more for a while. He stared up at the stars, and she stared at him, memorizing his profile. A cool breeze swept through the clearing, and she could smell leather, sweat and something spicy in the breeze. She shivered, realizing that it was his scent. He looked at her, and she glanced away, embarrassed.

"Are you cold?" he asked, his voice sounding normal.

"A little," she admitted.

"You should go back inside."

"My ankle still hurts," she said, because it did. It was throbbing, and it looked as though it had already swollen to twice its size. "I don't know that I can make it."

"I'll be all right. I'll go in after a few more minutes of rest." She frowned down at her ankle, and something occurred to her. "I don't suppose you have some leopard's bane in one of your pouches?"

She wasn't sure why, but she seemed to remember that leopard's bane was good for swelling. Maybe Nightjewel was right, and she was a healer who lived in a city somewhere.

"No," he said. "I don't carry medicinal herbs when I travel with Nightjewel."

Phina nodded. That made sense. Nightjewel seemed like a very useful person to travel with, certainly more useful than she was. She allowed herself an indulgent moment to wallow in self-pity, then shook it off. That would certainly not help her ankle any.

He looked at her again.

"I saw this flash of yellow light just before the snake noise. What does that mean?"

His eyes widened. He stared at her for a long moment, so long that she fidgeted uncomfortably. "Who are you?" he asked, his voice sounding strange. He grabbed her arm and pulled her closer to peer into her eyes. "Why were you sent here?"

"Ouch! You're hurting me!" She tried to pull away, but his fingers tightened.

"Answer me." His voice was low and dangerous. Fear squeezed her chest. She trembled, but he wouldn't back down.

"You're not a mage," he said, letting her go. She fell back with a cry, and he stood up to loom over her. "Why are you here?"

Ashes started to reach for her, but stopped. His eyes flashed yellow, like he had just used magic, and she shrieked and scrambled backward in terror. But he didn't move, except to collapse to his knees. He bent forward, putting his hands over his ears as if to block something out.

"No, no, no," he moaned over and over as she stared at him. It took her a moment to realize that he was reliving another memory. From the look of him, it was a bad one.

Relieved, Phina scrambled up and prepared to flee past him back into the cave. He reached up and caught her wrist as she ran, and her ankle twisted again. She cried out and fell, and he pulled her toward him, pinning her between his body and the ground. She fought him, her heart beating like a trapped bird beneath her ribs, but while he wouldn't let her go, his hands suddenly turned gentle.

"Nightjewel, please, I'm sorry," he sobbed. She froze, her hands still pushing on his hard, unyielding shoulders. He gathered her up and rocked her in his arms. "Please, I love you, I'm sorry," he whimpered softly into Phina's hair.