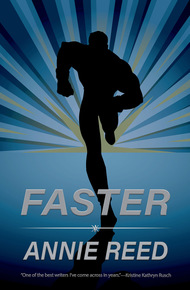 Jackson's not a normal high school kid, but he has no idea just how special he is.

Stuck in the foster system with a body that's slowly betraying him, Jackson struggles just to make it through every day without attracting attention.

He especially doesn't want to attract the attention of a star football player who could snap Jackson in two without breaking a sweat, but it looks like that's not going to happen.

And he can't do a thing about it.

Annie Reed is in so many volumes of Fiction River it would take up too much space to list them all. Every editor we have has chosen her stories for at least one of their volumes. She's that good. And Faster is a fantastic example of her writing skills. – Allyson Longueira

Sweat beaded on Jackson's forehead and threatened to run into his eyes. The gym was unbearably hot for the beginning of November.

McKinley High couldn't afford air conditioning for the classrooms, much less the gym. The football players didn't seem to mind. They lifted and grunted and grimaced at their reflections in the weight room's mirrored walls as they concentrated on building thighs and calves twice the size of Jackson's on a good day, and he didn't have too many of those.

At the beginning of the semester, the JV guys had openly stared at him and his scrawny legs when he wheeled himself into the weight room. That had stopped after a few weeks of getting their asses handed to them on the field. Not that Jackson ever went to a game, but he couldn't help but hear the players talk in between the clank of the free weights. Apparently the losses hadn't been pretty.

The varsity players ignored Jackson completely—just as long as he stuck to the leg machine in the corner.

The mirrors in the corner had cracks. Cracks meant bad luck. Football players hated bad luck of any kind, especially varsity players who were hoping for college scholarships.

That was fine with Jackson. He tried to tell himself that didn't really believe in luck. Better than believing the universe had gifted him with mostly bad luck his entire life so far.

He also tried to ignore the football players.

Not an easy task with Gil around.

"Would you look at that guy?" Gil puffed out his scrawny cheeks in a horrible imitation of Olivas, the center on the varsity squad. "Man, who would date somebody like that? He'd fuckin' squash them flat."

Olivas had to weigh two-hundred fifty pounds, easy. He was currently doing squats with more weights on the bar than Jackson could dream of lifting.

Jackson didn't bother to point out to Gil that Olivas could squash Gil flat with one muscle-bound butt cheek.

Instead Jackson ignored Gil's question—it wasn't much of a question, anyway, considering Gil's attention span for most things was about a microsecond long—and took a drink of tepid water from the bottle hanging from one of the grips on his wheelchair while he swiped away the sweat from his forehead.

Warm water tasted nasty, but the ice he'd shoved in the bottle before he'd left for school that morning had long since melted. His foster mom had promised to buy him one of those metal water bottles that advertised it kept water cold for eight hours or more—a reward, she'd said, for keeping up with his weight work during the summer—but she'd been promising him that for weeks now.

Jackson didn't push her. Unlike some of the fosters he'd lived with, she was a kind, caring woman who did the best she could. He'd gotten lucky—at least in that department—when he'd been placed with her that the spring.

He offered the water bottle to Gil, but Gil shook his head.

They weren't really friends. They'd been paired together as workout partners at the start of the school year. They were both seniors and both "physically challenged" (the politically correct term of choice for the administration at McKinley High) , so of course the coach had put them together.

Gil had been in a car accident when he was in third grade, which had left him with a twisted leg and a gimpy walk . He said he got his bad eyesight from his mom, and his red hair and freckles from his dad. His black-framed glasses made his eyes look huge in his skinny face. The rest of him was pretty thin, too. No matter how hard he worked out, his arms looked like pale sticks poking out of his gym shirt.

Jackson wasn't quite so skinny. His hair was dark, not quite black but too dark to be just brown either. Thanks to what had to be a pretty mixed up genetic history, he looked like he had a natural tan all year, even when he hadn't been out in the sun. His vision was perfect, or so his doctor told him every time she tested Jackson's eyes. So was his hearing.

His "challenge" (was it really a better word than "disability"?) had to do with his legs. Or maybe it was his spine. He didn't think his doctors and the specialists he'd been sent to had ever quite figured it out.

On his good days, he could walk with braces on his legs. On his bad days, his legs trembled so bad he had to resort to using a wheelchair to get around.

Today wasn't one of his good days.

He'd managed to shift his body from the wheelchair to the leg torture device on his own. That wasn't the machine's official name, but Jackson didn't much care what anyone else called it. The point was to strengthen his thigh muscles on both flexion and extension (fancy words for bending and straightening—why couldn't adults use words that meant what they really wanted to say?) with the goal of letting him walk someday without the braces.

Or that was the general idea, according to his physical therapist.

Today, all the bending and straightening was killing him. Gil had even tried to take some of the weights off the bar, but Jackson wouldn't let him.

"No pain, no gain," he'd said through clenched teeth.

Yeah, he probably was. No sane seventeen-year-old cripple dreamed the kind of dreams Jackson did.

Dreams where he ran faster than any man alive.

Faster than the Blue Bullet.

Jackson gripped the handholds on the leg torture device while he grunted with the effort to raise his legs one more time.

He could have lifted the weights easily with his arms. Most of a lifetime spent using his arms as much if not more than his legs to get himself around gave him the kind of shoulder muscles the football players worked so hard to get.

He looked in the mirror while his legs made their slow, trembling ascent, but he didn't look at himself.

Olivas had moved on from squats to dumbbells. Muscles bunched under the slick skin of his arms as he worked each heavy dumbbell in a steady rhythm, right arm and then left and back to the right again. The movement rocked his body back and forth, but Olivas made it look easy. He didn't even grunt like the rest of the guys did.

Except for the bit of a belly hanging over the belt on his sweats, the guy was all muscle. How many kids had he flattened on the field just by running into them? Had anyone actually ever taken him down? Jackson had no idea.

Maybe Olivas had dreams where he was a superhero, too.