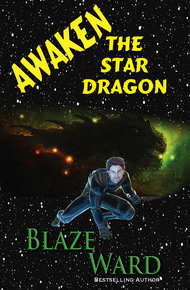 Two tiny lizardmen scientists/criminals power up their illegal wormhole generator, getting ready to kidnap their next victim by pulling the poor human across the galaxy in an instant, forever trapping him in the Accord of Souls.

Maybe this human won't destroy everything they love.

The last human they kidnaped killed the big boss, took over their criminal gang, and now, threatens the entire galaxy.

The problem? Despite being criminals, the human they want to kidnap is a cop.

What could possibly go wrong?

Blaze Ward never fails to surprise me with his writing. He wrote me a story about a strawberry dragon (which I had to have) for a future volume of Fiction River, and in this brand-new novel he finds a way to turn the whole alien abduction thing on its ear. – Allyson Longueira

"You do realize that this is the single, most completely-insane thing you've ever suggested, right?" his partner asked pedantically.

"So far," Morty corrected sternly, focused on the long control console in front of him. "Only so far, Xiomber. I'm sure it's going to get much worse before we're done."

"You truly believe that a human is the only being that can save galactic civilization from utter ruin?" Xiomber rattled on, leaning against the side of the control board but carefully not touching anything.

"Hey, a human's going to destroy everything if nobody stops him," Morty snapped. "And they even have a phrase for this, those folks: fighting fire with fire."

"We've got to find the right human," Morty replied. "The one Sarzynski is always going on about. Would you talk that way about anybody if they weren't your worst nemesis?"

"I talk about you that way all the time," Xiomber reminded him.

Morty didn't have a good response for that one. But he and Xiomber were egg-brothers, partners in science as well as in crime. And a lizard needed a friend watching his back. The galaxy was a big and dangerous place.

It had just grown bigger and more dangerous since the boss, the old boss, had decided that what he really needed was a human assassin as part of his team.

What other species could do violence without the slightest drop of empathy in them, after all? Humans weren't part of the Accord of Souls. Hadn't been Uplifted by the Elders, the grand and now long-vanished Chaa, and bound into a single, psionic whole as a way to bring peace between diverse solar tribes.

Hell, when the Chaa left, humans were still banging the rocks together, hoping someone was listening.

Who knew that they would suddenly evolve into an intelligent species and discover technology? It was all the Accord of Souls could do to keep humans isolated in their own home system and ignorant of everyone else. Safer that way, by far.

"You going to help or not?" Morty finally asked, looking up from the panel of knobs and gauges in front. "'Cause if not, then you need to go into the other room and not call the cops until I'm gone. That, or shoot me now, before I go and commit the worst crime imaginable on the books. Again."

He looked over at Xiomber, waiting for the damned lizard to make up his mind. Most species had a hard time reading emotions in the Yuudixtl. The Warreth probably came closest, since they had feathers that could semaphore to communicate, so they had half a clue.

Yuudixtl just had scales. Stripes and blobs and patterns that didn't really mean anything, since the Chaa had fixed their genetics when they uplifted the intelligent lizards to be one of the galactic custodians.

Xiomber was keeping his scales flat and starkly uncommunicative.

Like Morty, Xiomber was mostly kinda a gray-green somewhere a little darker than sage, but not down in that totally sexy range of a Terran crocodile. It was a shame that Yuudixtl couldn't be upgraded any further. Crocodile would be freaking awesome.

And probably useful right now, since a renegade human assassin had already killed the boss and pretty much taken over the whole organization, murdering anybody who tried to stop him or even looked at him funny.

The Yuudixtl were the smallest intelligent species in space. And maybe the smartest. They followed the basic uplift design the Chaa had selected: symmetric biped with sense organs on the head and opposable thumbs. If they were only half the height of the Vanir, and a third their mass, they made up for it in smarts.

Or had, right up until he and Xiomber had listened to Cinnra, the old Boss, and built him an illegal wormhole generator to capture a human killer, one step ahead of the human cops catching the guy, back in the Earth system.

Probably the dumbest thing they'd done, but only so far.

Morty looked forward to topping it in about five minutes.

"You're nuts," his partner repeated. "But what's the worst they could do? Throw us both in prison for two lifetimes instead of one? Scoot over."

"Because you'll probably screw it up and pull the wrong guy through again."

"That was one time, and it was a chicken," Morty defended himself. "And you're the one who swore the machine was calibrated correctly."

Still, he leaned back and let Xiomber kinda hip check him out of the way. Quickly, four green hands flashed over the long rows of dials, tweaking things down and refining the target zone. They would probably only get one shot at this, because the power surge when they tripped all the generators would get someone's attention.

Maximus Sarzynski, wanna-be ultimate crime lord, would not take it well, him and his egg-brother digging up the guy's worst enemy and pulling him halfway across the galaxy as an insurance policy.

And unlike the Uplifted Species in the Accord of Souls, Maximus could kill them without the slightest hesitation or provocation. Just what old Cinnra had wanted in an hired gun.

He had only really screwed up when he thought that he could control a human afterwards.

"You figured out how we escape?" Xiomber asked out of the side of his mouth. "Those damned birds will roll over as soon as the new Boss yells boo. Then they're coming after us. And we sure as hell can't go to the cops with something like this."

"Kinda planning on cheating," Morty replied. "That's why I wanted you in the other room if you weren't going to help."

"After we grab the human, I was going to redirect him right through another wormhole, and jump in after him," Morty said carefully. "This controller is kinda programmed to overload and eat itself, so nobody can chase us, or figure out where we went."

"Are you sure we came from the same egg batch?" Xiomber growled. "'Cause I don't remember any of my siblings being that dumb. Where do you think they'll look?"

"I'm not sending him to Yuudixtl," Morty replied. "Like you figured, first place Maximus will look."

"Where then, Morty?" his partner got serious. Way serious. Like maybe thinking-about-overcoming-the-empath-bond-so-he-could-kill him serious. "Where you are dumping us out?"

"Orgoth Vortai," Morty said in a quiet, careful voice, expecting to get punched in the snout.

Instead, Xiomber turned and stared at him for several seconds, jaw agape. And then he started laughing.

Morty relaxed and zeroed down the last few gauges. The range was stupid long for a shot like this, doubly so on a bounce-tube, but they also had an exact match of the psionic coordinates that had located Maximus the killer in the first place. All Morty had needed to do was flip them end for end and find the man who was Sarzynski's psionic opposite.

"You ready to do this?" Morty asked as Xiomber settled down.

"Why the hell not?" Xiomber said. "I always wanted to visit the world of the tentacle-heads. With any luck, they'll look at the whole, damned thing as a monstrous art installation. Maybe a performance piece for the ages."

"That was actually part of my original logic," Morty admitted. "They already do crazy shit. What's one thing more?"

He reached out and grabbed the second-to-last slider, ramming it to the top of the scale with a hard click. Several floors below, a dozen generators began to hum. In moments, they were singing. Shortly, the metal would begin to scream.

Around them, overhead lights flickered and then a few exploded, throwing rooster tails of sparks and smoke in all directions as Morty's device started pumping too much power through the entire building. At least nobody would be using this tube generator station again.

But boy, was Maximus going to be pissed.

"Do it," Xiomber shouted over the rising din. "We're not going to hold this much longer."

Morty grabbed the last slider and pushed it slowly forward.

"Energizing," he hollered back.

In the area beyond the control console, a golden nimbus of energy formed, and quickly resolved itself into a pair of tube openings, like a hose that had been sliced neatly in half.

Morty stared hard at the zone controls, watching the screen's targeting array home in on the target he had selected.

"Almost got it," he yelled, starting to smell smoke rising.

The console was probably close to catching fire, with the energy they were processing through it.

"Now, Morty," Xiomber screamed. "It's not going to stay intact much longer."

Morty slammed a fist down on the big, purple button and listened to the generators reach for that last two percent.

Definitely getting bright in here. Maybe a little warm.

"Let's go," he scrambled around the console and began to run towards the nexus of the bounce-tube.

"What if you missed?" Xiomber was a step behind him.

"Then our goose is right cooked when Maximus finds out, and we've got nobody to hide behind," Morty replied.

Something was coming through the first tunnel. Morty could see the left-hand tube pulsate, like a snake swallowing a rat. Hope to the Gods this worked, because he also saw a door open at the far end of the lab.