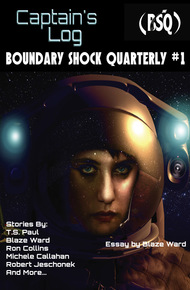 Let those words send your imagination soaring as we travel with twelve different authors to exciting, distant futures. From a young Lieutenant thrust into command by the worst disaster imaginable, to aliens trying to understand humans, to galaxy-ending civil wars, and first contacts across a variety of cultures, these stories will make you think, make you dream, make you go awwwwww. Find your sense of wonder again and come exploring with us.

Be there at the beginning.

This relatively new quarterly speculative fiction magazine edited by the oh-so-talented Blaze Ward really fit the bill for this bundle. The stories, as Blaze says, range "from the silly to the sublime." So, how could I resist? Plus, I couldn't wait to see what these incredible authors would do to twist the topic "Captain's Log." They did not disappoint. – Allyson Longueira

Essay: Who Are We?

Welcome to the first issue of what we hope will be a long-lived speculative-fiction magazine: Boundary Shock Quarterly.

I have wanted to do something like this for many years, but the time, effort, and costs associated with a project of this magnitude dissuaded me from the task. But the times, they are a'changin'.

Once upon a time, it took amazingly deep pockets to fund it all. Authors and artists and staff had to be paid up front, and then the publisher had to hope to eventually make back that money over the long term. Most magazines started well, but eventually ran into problems, when circulation numbers fell to the point that they couldn't afford quality. Cue circling the drain and death sequence. (The old joke: How do you make a small fortune in publishing? Start with a big fortune!)

In the modern age, there are two new options available. The first is to do a crowd-funding option (Kickstarter, Indigogo, etc.) and do each issue as more of an anthology, where folks pre-order and you have (hopefully) enough cash in hand to pay everyone off at the start, and then do another kickstart for year two. It works, and I know people that do it this way. Some even do an annual subscription drive this way. (www.fictionriver.com does six issues at a time, runs a kickstarter every other year, and have been pretty successful.)

Personally, I wanted to explore an even newer technology. BundleRabbit (www.bundlerabbit.com) allows authors a do-it-yourself model for assembling bundles of stories. No money up front, and everyone gets paid a royalty-share on the back. Recently, the gang over there added a new facet called Collaboration.

It goes like this: I have a completed manuscript composed of the various stories I have gotten from writers, with the cover art and interstitials finished. I put it up on the Bunny. BundleRabbit then handles the task of publishing and distributing this thing, the Boundary Shock Quarterly magazine, to all the major players: Amazon, Kobo, iTunes, etc.

More importantly, however, I can set the pay distributions for the magazine when I upload it, and BundleRabbit will pay all the authors FOR ME. You have no idea how much load that takes off my back. Every month, I would have to calculate incoming money, and then divvy it up into slices based on which issue you were in, times all the issues out there.

Impossible. Would require a full-time book-keeper to even attempt, and I can't afford it.

I don't have to. The Bunny will do it all for me for a very equitable slice of the overall profits. This is good.

So now I just have to ensure a broad and interesting group of writers. I don't want to have to advertise every issue and hope I can find quality stories. That would mean piles of slush every quarter to wade through. Again, can't afford the time it would take. And I don't ever want to read slush again. I have gotten spoiled by reading my friends, who are extremely capable professionals who know how to tell a story. (Whether we always succeed when swinging for the fences in terms of storytelling is another thing entirely…)

So here's where Boundary Shock represents a different pace, as far as my limited research has explored to date. When I set out, I wanted a Syndicate of writers to commit to putting stories into this project on a clean royalty-share basis. Many small publishers, conversely, do a dirty royalty-share, where the publisher's expenses must earn out before the writers make any money. This way, I will take a slice of every dollar that comes in, but all my writers share the rest of the pie from day one.

For writers, it was an exercise in hope. They hope that their fans will pick up this issue and buy it, so they see money. They could have just done the Indie thing and gotten the money directly. More importantly, these writers hope that a random fan of someone else picks up this issue and reads all the stories. In the process, they find new authors they like, and then go buy that person's catalog and tell all their friends about it. This is an exercise in collaborative marketing.

So I went and recruited a Syndicate. Fourteen writers, plus me. Half of them are already making a living writing Science/Speculative Fiction of one flavor or another, but we're gypsies in the gig economy, and it could all go away tomorrow. So we have to hustle.

Each author that joined me agreed to put at least two stories in per year. That's all I ask. (Some of us will try to be in every issue going forward, but I wanted two.) In trade, they get a list of upcoming themes, and the ability to write into any of them they want to explore. And for now, the group of us are all that will be in Boundary Shock.

Starting in Year Two (Issue #5), I might invite an occasional guest author to play. I know lots of people in the industry, and I'm hoping we get big enough that they reach out and want to be a part of this adventure. And I know I'll eventually start losing people. Life happens. Or they get so amazingly successful/busy that they don't have time to play here anymore. That's okay. I'll recruit new players.

I started with genre writers. It was just bad luck, but I wasn't able to nail down any visual artists who would put pictures on the theme in. But that'll come. I also still have a few poets I want to go after. And I would like to ask a couple of my musician friends to write me science fiction rock operas, while we're at it.

More importantly, I want to broaden the reach of science fiction. Right now, it is a genre largely seen as "middle-aged, middle-class, white guys." I'm guilty of all of the above. But when I went recruiting, I was able to include four female writers who do science fiction. I plan to recruit more.

Most of us here are Anglos, but I have been reaching out there, as well, connecting with such organizations as the African Speculative Fiction Society; Afrocentric Books; and Fiyah Literary Magazine, to name just a few. Once we get going, I plan on reaching out to those groups and others and helping shine a spotlight on writers and places you haven't yet encountered. To broaden your horizons, even as I broaden my own. And find other friends.