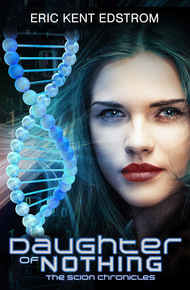 Daughter of Nothing by Eric Kent Edstrom

Daughter of Nothing (The Scion Chronicles Book One)

While the powerful seek immortality, the Scions struggle for survival.

Few people know that the Scion School exists. Tucked away on a private Caribbean island, the school hosts thirty-six exceptionally gifted students. They train every day to prepare themselves for an immense responsibility, to lead humankind back from the brink of extinction.  At least, that's what they've been told.  Only one student—a seventeen year old named Jacey—suspects the truth. Driven by her undying loyalty to her friends, Jacey races to untangle the truth of who the Scions are…and what the headmaster truly means when he says they are bound for a great destiny.

Daughter of Nothing is the first book in an amazing new series for fans of dystopian fiction.    Eric Kent Edstrom—author of Starside Saga—is back with more lovable characters, thriller pacing, and shocking twists you'll never see coming.

Eric Kent Edstrom is a frequent contributor to Fiction River and you might remember him from one of the Storybundles I've curated in the past. I'm a huge fan of his YA novels, in particular, and this one provides a plot twist at the end that is creepy and icky in the best possible way. – Allyson Longueira

Upon arriving at the hacienda, Dr. Carlhagen tottered to his office. The long sea journey and bumpy Jeep ride had left him weary and battered. Next time he'd come by helicopter.

He opened his desk drawer and dug out his bottle of andleprixen, a painkiller he'd developed long ago. Like the rest of his inventions, it had never received regulatory approval. His hands trembled such that the bottle shook like a maraca. At nearly ninety-three, he had little to complain about. He had lived a long life, most of it vigorous, and had left a series of successes in his wake that would leave an indelible mark on human history.

Assuming he survived the next year.

He twisted off the cap and downed a slightly larger dose than necessary. No matter. His liver was healthy enough, and the pills were the only thing that helped the damned arthritis. Oh, how he longed for the careless ease of his youth.

Soon, soon, he reminded himself. A year. If he could just make it a year.

Mr. Justin, the butler, appeared in his doorway. He bowed low, flashing the crown of his hairless head. "The Progenitors are all settled in the medical ward, sir. Nurse Smith has begun the tests you requested."

"Good." He pulled his old timepiece from his vest pocket and glanced at the yellowed face. "Plenty of time. I'll call you if I need anything else."

Dr. Carlhagen stroked his gnarled thumb across the face of the timepiece. The watch was an heirloom, handed down from eldest son to eldest son since 1913.

Two hundred years. If only his heart could tick as long as that miraculous device.

The thought brought an even broader smile to his face. His father had paid a watchsmith to replace the original action inside the watch. How proud the old man had been of the work. "Look, son. You'd never know these weren't original parts. The smith even matched the patina on the gears."

Dr. Carlhagen remembered feeling nothing but disdain. If one was going to go to all that effort, why not improve the device? Why not use modern materials? Why not polish it up to shine like new?

Some considered antiques more beautiful because of their age, an idea Dr. Carlhagen had never understood.

Enough philosophizing. He tucked the watch back into his pocket and turned his attention to what lay ahead.

Eighteen years of work had come to this day, the first graduating class. Finding Progenitors rich enough to afford a Scion had been relatively easy. The trick had been finding ones with enough urgency or inborn recklessness to go first. If they knew that Dr. Carlhagen himself had not been willing to take that risk, he doubted they would have agreed.

A pleasant flush of warmth filled Dr. Carlhagen's veins as the andleprixen took effect. The pain in his joints eased, and his ever-present headache faded.

He had nothing to worry about. The Progenitors would all end up happy customers. The animal tests and the one human trial had proven the technology, and he'd made progress since then.

Once the first transfers were complete, he'd know for sure if all the effort and expense had been worth it. If so, he had a long life of extraordinary wealth and power to look forward to.

He gave the bottle of andleprixen a little shake before tucking it back into the drawer. There were plenty of pills left to make a quick end.

He put his hands on the surface of his bare desk, initiating a Michael session. The AI's holographic image, fifteen centimeters high, resolved above Dr. Carlhagen's desk.

"Welcome back to St. Vitus, Doctor."

"Anything I should know about, Michael?"

"I'd prefer if you call me Socrates."

"I'll call you whatever I wish."

Michael's avatar wore a finely tailored suit. He always appeared to Dr. Carlhagen as a young man in his mid-thirties, hair cut short and neatly combed, exactly how Dr. Carlhagen's business partner, Michael, had looked before uploading himself. He'd taken to calling himself Socrates when Dr. Carlhagen put him in charge of educating the Scions.

"The students are doing well. I get the usual questions about graduation and the state of the world occasionally. Sensei Rosa has done a wonderful job curbing that. I never get questions from Crabs or older anymore."

"Excellent. It's been, what, four years?"

"I want to see the Eagles."

Michael nodded solemnly then transformed into the head and shoulders of a young man with dark eyes and short-cropped hair.

"This is Vaughan," Michael said. "Focus is on math, economics, and finance. Sensei considers him the strongest Scion on campus and the best fighter he's ever seen."

Dr. Carlhagen leaned back. The boy's resemblance to his Progenitor shouldn't have startled him, but it did. It also irritated him. "Show me Humphrey."

Vaughan's face dissolved into a boy with a thinner face, bony cheeks and prominent Adam's apple. He had a slightly sullen look, which made Dr. Carlhagen snort.

"Yes. A textbook case of depression. Shall I have Nurse Smith add an appropriate medicine to her daily?"

Dr. Carlhagen had argued with Michael about this several times before. The AI didn't appreciate the risks of meddling with a Scion's brain chemistry. The anti-depressives lingered for a long time. The risk to the Progenitor was too great.

"She'll have to make it through one more year. Watch her, though. If necessary, I can have Nurse Smith hold her in the medical ward."

"Show me Jacey." Despite the andleprixen, Dr. Carlhagen's heart picked up speed. One of the reasons he'd stayed away from St. Vitus so long was to avoid seeing her. She wasn't good for him.

Belle's face dissolved and reformed into one so familiar and so beautiful it stole his breath.

Michael said, "She's been on a memory and literature track for most of her time at the Scion School."

Dr. Carlhagen had to clear his throat in order to speak. "How is Jacey doing?"

"Superbly. The most gifted memorization skills I've seen in a human."

The irony made Dr. Carlhagen laugh. Jacey's Progenitor, an actress, had asked for memorization training as an afterthought.

"Sensei Rosa reported three occasions Jacey spoke with a boy outside of allowed social periods. Sensei believed the transgressions to be incidental. He issued exercise punishments."

Of course it was. Dr. Carlhagen forced his jaw to relax even as he reached for the drawer handle to get his bottle of pills. He stopped himself and instead took hold of his cane and stroked the handle, a silver boar's head.

As he stared at the girl's beautiful, familiar face, his mind started down a well-worn path. And just like the Jeep when its tire got stuck in a rut, he found it impossible to change the course of his thoughts. The hologram of Jacey's face had long disappeared by the time Dr. Carlhagen's mind came to a fork in the road.

But for all his thinking and musing, Dr. Carlhagen knew he'd made the decision about Jacey long ago.

The butler stepped in and gave a slight bow.

"Prepare to greet two guests in the hacienda. And bring the box in here."