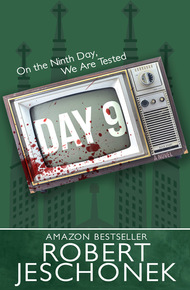 Somewhere in the world, a genius builds a machine to bring mankind closer to God. Somewhere in time, another genius builds a cathedral with a mind of its own. Somewhere on the road, three searchers race a serial killer to find the man with the key to salvation. It takes the sound and fury of Day 9 to bring them all together. If God took six days to make the world and rested on Day 7, humanity has spent Day 8 tearing it all apart. Everything changes on Day 9, when we get it right at any cost…or lose everything. On Day 9, a God's-eye view of the world collides with the visions of a living, breathing cathedral in a war between the delusions of yesterday and the dreams of tomorrow. A war between beauty and mediocrity…love and hate…madness and sanity…life and death. If the unlikely heroes in the heart of the storm can't face down their own demons, the deepest secrets of maniacs and murderers could bring the hope of the future crashing down forever.

Don't miss this edgy, exciting, surprising, and thought-provoking thriller in the tradition of Tim Burton, the Coen Brothers, Thomas Pynchon, and Kurt Vonnegut, Jr. It's the latest novel from award-winning storyteller Robert T. Jeschonek, a master of unique and unexpected fiction that packs a punch.

Around here, we the world of Robert Jeschonek's writing Planet Bob. He is one of the most creative authors I have ever (or likely will ever) work with. For example, Day 9 is told partly from the view of the Sagrada Familia cathedra in Barcelona (and spectacularly so). Enough said. – Allyson Longueira

The church exploded in a tremendous blast of fire and smoke. Rubble rocketed in all directions as an ear-splitting boom cascaded across the valley. Flaming debris crashed down on car hoods and bounded over the pavement. A church bell hurtled into the cab of a garbage truck, smashing through the windshield with a loud, discordant bong.

An enormous, blazing crucifix plunged on the roof of a car speeding away from the blast, sending it spinning in circles. Tires squealed as the car swept around and around, finally slamming into the pump in front of a gas station, which then exploded.

A plume of fire shot skyward from the pump, blowing the car end-over-end across the street. The gas station windows shattered inward, and every car on the block bounced from the force of the blast. Power lines snapped and whipped like cobras, spraying showers of sparks through the air.

Then, suddenly, someone yelled, "Cut!" And the whole movie crew erupted in wild applause at once. Everyone behind the cameras clapped and hooted and whistled at the spectacular display of carnage.

Dunne Sullivan clapped, too, though he felt as dazed as he was excited. The mayhem had left him in a state of shock; he wasn't part of the crew and wasn't used to spending time around high intensity action scenes during filming.

It was true Dunne made his living off movies and TV shows, but he did so by writing tie-in novels based on them. Till today, the closest he'd been to a movie set or location shoot was the TV screen in his apartment.

But according to Thad Glissando, producer extraordinaire for Halcyon Studios, he'd be spending a lot more time there from now on. "Hey now, hero!" Thad clapped Dunne on the back, jolting him forward. "Think we got enough bang for our buck here?"

Dunne nodded and grinned. "I want toys like that for my movie."

Thad laughed. "Don't worry!" He ran a tanned hand over his slicked-back blonde hair. "Weeping Willows The Movie will have twice the budget of this picture."

Dunne got a shiver of excitement just hearing the title. He was going from lowly tie-in writer to Hollywood screenwriter just like that. All thanks to a bestselling novel he'd written about the cult classic 70s cop show Weeping Willows, a kickass hit breaking big just as Thad was gearing up for a Willows movie.

So Dunne was about to write a major motion picture. Meeting on location with Thad would seal the deal, and then Dunne, at age 25, would finally get his shit together.

At least as much as he could ever get his shit together after what he'd done to his family.

"Ready to start writing?" Deep crescent dimples set off Thad's mile-wide smile like parentheses. "Does this get the creative juices flowing?" He spread his arms wide to take in the smoky set, hissing with the spray of fire hoses putting out flaming debris from the shoot. The afternoon sun flared on the sleeves of his tailored white suit, giving him a radiant, angelic glow.

"Are you kidding?" said Dunne. "When do you want the first pages?"

Thad threw an arm around Dunne's shoulders and gave him a squeeze. "Actually, you need to do some preproduction first." Thad nodded and raised his blonde eyebrows. "Some research."

"On location." Thad turned Dunne from the set and pulled him along as he started walking. "Expenses paid, of course. And you'll have a partner."

"Partner?" Dunne kept frowning. Thad was guiding him in the direction of a white limousine parked alongside a trailer twenty yards away. "A writing partner?"

"More like a hunting partner," said Thad. "And inspiration."

Suddenly, Thad jammed two fingers in his mouth and let loose a shrill whistle in the direction of the limo. "Time for your close-up, Hannahlee!"

The back door of the limo swung open, propelled by a slender arm. A woman's arm in a long, black sleeve.

As Dunne watched, the woman's arm withdrew. After a moment's pause, her foot slid out, wearing an ivory pump. It was followed by a shapely leg in pale white hose. A black skirt with white piped trim rippled just below the knee.

Thad elbowed Dunne in the ribs. "Take a deep breath, kid. This is what they call a life-changing experience."

Thad's warning did no good. Dunne still wasn't ready for what he saw. For whom he saw.

When the first foot touched the pavement, the second one swung out beside it. Dunne saw more of the dress: gathered waist, wide white belt, white buttons. Understated, businesslike, crisp. As the woman braced herself against the seat, he saw white piping running from cuff to shoulder along her sleeve.

Squinting into the shadows of the limo, Dunne strained to glimpse her face. For a moment, all he could make out was a faint, gauzy shape, like a veil concealing her features. Like a ghost.

Then, suddenly, she emerged. She pushed up from the seat and stood straight, revealed all at once before him in bright daylight.

Which was exactly when Dunne gasped.

He could not believe his eyes. Not even a little. She couldn't be.

Thad laughed beside him. "I was wrong, wasn't I?" He shook Dunne's shoulders. "Life-changing experience is putting it mildly."

She was striking. The woman at the limo was in her late fifties or early sixties, at least. She was dressed conservatively, and the red color in her shoulder-length hair must have been dye.

She was most striking because of the way she carried herself. The way she stood there, tall and regal in the late afternoon southern California sun. Thirty years past her Weeping Willows glory days, twenty years since she'd dropped out of the public eye...and still somehow resplendent, impressive, luminous. Still the star of all she surveyed.

Dunne stumbled as Thad walked him to the limo. His heart pounded, and nervous chills flashed through his body. His mouth went dry, and his palms turned wet.

Dunne frowned as Thad pushed him toward her. He recognized the woman, but not the name. "Pleased to meet you, Ms. Saylor." He extended his hand. "Or should I say Ms. Caprice?"

The woman smiled and shook Dunne's hand. "Lianna Caprice was a long time ago." Her voice was so familiar, deep and velvety, yet cracking with age on the lowest notes. "I go by Hannahlee Saylor now."

Dunne shivered as he held her slender hand. Until now, she had never been quite real to him. An image on a TV screen, she might as well have been a goddess, transfigured in distant cloud tops and rainbows.

Dunne held on to her hand for an extra moment, aware of nothing but her face, her presence, her touch. Her blazing green eyes, locked with his.

Finally, Thad broke the spell. "You two will be spending a lot of time together. We need you to find the ultimate Weeping Willows authority."

Dunne let go of Hannahlee's hand. He suddenly felt self-conscious and broke eye contact with her, too. "Who's that?"

Of course he had. "The creator of Weeping Willows."

Dunne combed his fingers through his thin, sandy hair. "But no one knows where he is, right?"

Thad shrugged. "You see our problem."

"He's been off the grid for what? Five years?" said Dunne. "Is he even alive?"

"He's out there somewhere." Hannahlee said it definitively.

"There are more rumors than you can shake a stick at," said Thad. "But we think there's some truth to them. We think he's hiding somewhere in the Weeping Willows fan underground."

"Is there ever!" Thad rolled his eyes. "Which is why we need you two. Kitty Willow herself and the writer whose books have kept Weeping Willows alive all these years. You'll have instant entrée with the fan community."

Dunne rubbed his chin. "And you want us to find Gowdy why, exactly?" He had a thought, and his hopes and dreams took a sudden nosedive. "Do you want him to write the screenplay?"

"No, no." Thad chuckled and thumped Dunne on the back. "But he is the only one who can save the movie. We need him to sign a release."

"What kind of release?" said Dunne.

"In Gowdy's original contract, he signed over everything to Halcyon Studios...almost," said Thad. "But he still has right of refusal on future Willows projects."

"See where we're going with this?" said Thad. "No signed release from Gowdy..."

"...no Weeping Willows The Movie. Got it." Dunne nodded and clapped his hands together. "So when do we start?"

"Show him the flyer," said Thad.

Hannahlee slid a folded sheet of pale blue paper out of her pocket and handed it to Dunne. It was an ad for the "25th Annual Willowcon" in L.A.

"The world's biggest convention for Weeping Willows fans," said Thad. "Might be a logical place to start, eh?"

"This is tomorrow," said Dunne.

It was the most famous catch phrase from Weeping Willows. Dunne knew it well, but he hesitated. Meeting the piercing green gaze of Hannahlee, he felt exposed. As if she could see through to what he really was. As if she knew he was as far from being a hero as anyone could get.

Because the truth was, Dunne's wife and baby daughter had died because of him. Because when a murderous gunman had broken into their home, Dunne had been too scared to fight back. He'd been too much of a coward to fight for his family's lives.

The truth was, Dunne was the opposite of a hero. But he said it anyway, to placate Thad. To move forward with this chance to turn his life around.

This chance for him to change.

"What're we fightin' for?" said Thad.

"You're darn tootin'." Hannahlee frowned at Dunne as she said it.