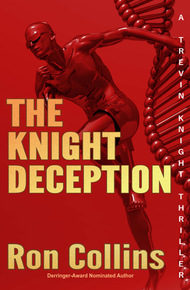 The Knight Deception by Ron Collins

Trevin Knight is a well-liked up-and-coming lawyer on a senator's staff who is still figuring life out.

The CEO of a genetic research firm turns up dead and Trevin Knight falls into the crossfire of a covert inside game that includes international politics, advanced genetic science, and even the nature of life itself.

Can Trevin stay alive long enough to save not only himself, but everyone else, too?

Ron Collins is a frequent contributor to Fiction River and a Derringer Award-nominated author for one of those stories. That story was a crime story, but he brings that writing prowess to this sf thriller. Set in the near-future, this "whodunit" goes a couple of different directions before getting to the surprise ending. – Allyson Longueira

"Please, have a seat," Dawson said with a genuine smile.

Trevin sat, and looked for a place to put his coffee.

An engraved nameplate sat at the edge of the senator's desk, complete with an embedded sweep hand clock. Two figurines stood beside it—a donkey and an elephant facing each other as if in mock battle. On the other side was a framed five-by-seven of Dawson shaking hands with the president, and a marble paperweight etched with the emblem of the International Bar Association. Dawson had been a corporate lawyer in Kansas City before entering politics.

Trevin finally decided to just hold onto his cup.

Dawson returned to his seat, and sat in his high-backed chair. "I'll get straight to the point," he said. "I need you to handle something for me."

"A friend called this morning. He's being held for questioning down at the Sixth District."

"Who is this friend?"

"Piled higher and deeper," Dawson said with one of those wide grins that made Trevin feel like he was being put on. "A man named Calvin Forrester was killed last night, and the police seem to think Lawrence might know something about it."

"Calvin Forrester. Why is that name familiar?"

Dawson rested his elbows on his chair's armrests. "He was the chief executive officer of the Genetic Technology Systems Lab."

"That would be him."

"I should have remembered it."

Dawson waved a nonchalant hand as if to say Trevin was worrying too much, but Trevin knew better. Careers were being made and broken over the implementation of federally regulated genetic manipulation, with the Republicans, Dems, and Indies all arguing over who should get to play God, and the Libertarians demanding the government keep their hands completely off the public's gene pool. He really should have remembered who Calvin Forrester was.

"What do they think Dr. Orr knows?"

"I haven't the foggiest. Lawrence wasn't in a terribly coherent mood on the phone. All I can say for certain is that the good mister Forrester has gotten himself shot, and that Lawrence's gun might have been used to do it. He said something about suicide, but I understand the police have found blood from another person at the scene."

"So they think Dr. Orr was there?"

Dawson gave a thin-shouldered shrug. "I don't really know. But Lawrence told me he didn't do anything and I'm inclined to believe him."

"I want you to get down there, press the flesh a little, and see what you can do about getting him out of the clink."

Trevin frowned. "Shouldn't Stewart do this? I mean, you do realize I'm not a criminal lawyer, right?"

"No, you're not a criminal lawyer, but you're a good lawyer, meaning you're quick, and you handle yourself well without being artificial or manipulative. You also have a lower profile than Stewart, which makes this easier to keep quiet." Dawson paused. "And, to put all my cards on the table, Stewart's busy finding me the six votes I need for my Farmland Renovation Bill."

The senator leaned forward with a new glitter in his eye.

"Besides, I saw your expression just now. You're a young man, Trevin. You need new challenges to keep you excited. I can see it in your eyes."

Trevin blushed at being so transparent, but gunplay, murder, and suicide were admittedly a bit more intriguing than corporate mergers and ensuring the senator's financial contributions were legit.

"So," Dawson continued, "I want you to go to the Sixth and see if you can get Lawrence Orr out of trouble. All you need to do is to keep your mouth closed to the media, keep the cops from asking a bunch of leading questions, quietly drop my name in a key place or two, and make sure Orr answers 'I don't know' as often as humanly possible."

"I knew I could count on you," Dawson replied.

Trevin rose to leave, but something bothered him.

"Can I ask a personal question?" he said.

"This is going to be a sensitive case, right?"

"That's why you'll keep quiet to the media."

"Sure. Client-counsel privilege and all. But it doesn't seem like there's much to gain here. I mean, with all due respect, why is a senator jumping into this?"