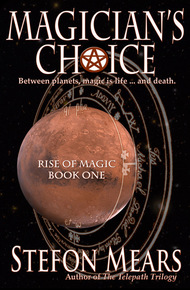 Mars: rendered livable by magic. Mars: source of carterite, the ore that makes space travel swift and sure. Mars: a wild frontier full of promise, and danger.

Courier Donal Cuthbert, a new wizard desperate to prove himself. He arrives on the red planet for a simple delivery…

And an attempt on his life.

Magician's Choice, an exciting tale of adventure and intrigue at high space, with dueling wizards and magic-driven ships. The first novel in the Rise of Magic series from Stefon Mears, author of the Cavan Oltblood series and the Spells for Hire series.

Stefon Mears is a frequent contributor to Fiction River and has a way of blending science and fantasy in delightfully unexpected ways. For Magician's Choice, his science fantasy is also an alternative history with a number of good twists to keep you on your toes. – Allyson Longueira

Donal Cuthbert frowned at the tourism sign above the customs station and said to the agent, "In a few weeks Bran might be the first human to set foot on Ganymede, and I'm not even the five millionth man on Mars."

"Passport," replied the tired woman whose skin bore the red tint of a local. Official speculation had it that the spells adapting Mars to human life might also adapt human life to Mars. The agent tapped Donal's passport with her badge. It chimed legitimacy. "Who's Bran?"

"The Bran Cuthbert is your brother?" The agent paused, giving Donal's passport a second look. "You must be very proud. Without men like Bran we wouldn't be on Mars today." She touched Donal's distressed leather messenger bag with a baton enchanted to detect contraband, then twirled the baton in a circle over Donal's head. No sound of alarm came. "Anything to declare?"

She consulted a list. "Everything's in order. Any checked bags will be in baggage claim in thirty minutes. Welcome to Mars."

Donal looked over the spaceport foot traffic as he left the customs area: busy, but less so than San Francisco. Maybe a thousand travelers instead of tens of thousands. He took a deep breath and started into the spaceport proper. He got two dozen steps past the waiting area when a half-meter-long dragon made of sinuous, wingless smoke whirled a wide circle around him and zipped away. Donal stopped. That had to have been someone's familiar. His contact?

Wait. Was that sulfur he smelled?

Fire roared. With a crack like a boulder shattering, a garbage can ahead and to Donal's right exploded into flame. The shock wave threw Donal at least two meters. He landed in a crumpled heap. Others in the crowd weren't so lucky. Donal spotted four charred bodies, then panic made the crowd a mob.

A silent mob. The explosion had consigned Donal to a world of dreamlike silence. Travelers milled and ran every direction. Donal clutched his messenger bag. Adrenaline froze him. Run away? Try to help? What should he do?

A hand grabbed his wrist. Donal was yanked to his feet by a beautiful Chinese woman with red skin and a light gray business suit. Her lips moved in rapid speech, but Donal shook his head and tapped his ear. She grimaced, craned her neck to look past him, then turned and dragged him sideways through the chaos in a broken-field run. She shoved him against a side wall. Donal's body lit up with dozens of aches that promised bruises from his fall. The woman glanced back, watching something over her shoulder. As far as Donal could tell, customs had locked down, sealing away the gates and docking bays. Travelers pushed every direction, a mass of confusion.

Travelers, but not everyone. A handful of men moved through the crowd, seeking something. Donal fished through his pockets. Where was his tuning fork?

The woman towed Donal along the wall and through a door marked, "Employees Only." Then they stood in a hallway that led straight back into the port or away on a curve. Along the opposite wall was a series of closed doors labeled in code.

Donal found his tuning fork, struck it, and waved it past his ears while chanting words he could not hear. Warmth flooded his ear canals, then heat, then sound popped back into his world. He could hear muffled screams and panic just beyond the door they came through.

"Yes." He held the tuning fork between them. "Who are you?"

"About time you asked for that." She handed him a business card that identified her by name as the Regional Director of Corporate Security for 4M. She fidgeted, impatient, while Donal tapped it with his tuning fork and checked the soft orange glow against what he saw when he waved the fork in front of her: a perfect match. Donal glanced to double-check, but she rolled her eyes and said, "We need to get moving."

She ignored the question. "Pinyin-Lung," she barked, and a spirit dragon puffed into being, the one Donal had seen near customs. Donal noticed an echo of resonance between them and concluded it was her familiar. Tai Shi Li Hua gave the dragon orders in Chinese, and turned back to Donal as it flew off. "I have just arranged for private transportation, but we cannot meet it here. My agents will collect your luggage. Do you have a familiar?"

"No." The comfortable subject helped Donal recover himself. He had a plan for binding the perfect familiar as part of his graduate studies. "I..."

"What is this, your first assignment? Stick close to me, then." They flattened against the wall as a crew in uniforms rushed past and out into the chaos. She flung a spell after them, a false trail deception if Donal read it right, then looked back at him. "Tell me the package is secure."

Donal gripped his messenger bag and the liaison smiled. She must have realized that his spells had made the bag too innocuous to notice. He smiled back. "The package is secure."

John Jacobs, captain of the helioship Horizon Cusp, crouched with one knee on the Martian ground as though he bowed before a king. He closed his eyes and picked up his customary handful of local dirt. He rubbed the rough soil through his fingers. He held it to his nose and smelled its tang. He opened his eyes at last and looked at the dirt. Dark. Red. Gritty. Mars. He stood.

Jacobs hoped to finish his day's business in time to refill his books with different novels, but he would not skip his personal gesture of gratitude for another safe voyage, another immaculate landing. He wiped his hands clean and sighed into the distance at the Barrier, where the blue sky above New Leningrad became the yellow sky of Mars. Was yellow the natural color or an effect of the Barrier? Jacobs could never decide if he wanted to know.

The spaceport's architecture was typical for Mars: a Mediterranean feel, all curves and arches, reds and tans and browns and open air buildings with plants that were sprayed, not watered. Jacobs did not dally for the art display: the story of humans on Mars told in curving, twisting red-brick statues carved by "local" artists who had been born on Earth, some fifty-six million kilometers away.

Jacobs left the tourist area of the spaceport for the smaller section dedicated to businesses run out of the port. Warehouses, shipping lines, and a handful of passenger lines like his own, Starchaser Spacelines.

Jacobs entered the office, but before he had time to greet the receptionist he heard his partner's voice. "John? That you?"

"It's me." Jacobs poked his head into Zoltan's office: spotless as a magazine ad for an executive suite, done in red oak as an homage to the planet. On Earth, Zoltan's office was brown, green and blue. On Earth's moon it was gray and blue. "What are you doing here, Zoltan? I thought you were heading back to San Francisco with Yoshi."

"Good thing I didn't. The Beamrunner didn't make it. Yoshi, his crew, and almost all of his two hundred eighty-seven passengers: dead."

Jacobs sank into one of the guest chairs across the desk from Zoltan. Yoshi was in his forties. Half Jacobs' age, and a decade younger than Zoltan. Too young. "Whiskey."

Zoltan broke out a bottle of bourbon, Butcher's Block. He poured them each a double. Jacobs raised his glass and said, "To Captain Yoshi Hirohito, taken home too soon by the stars. May his name live on, and may his spirit light our way whenever we sail the black depths."

The Butcher's Block burned on its way down, in Jacobs' mind a perfect choice for the occasion. Sixty-seven years he had sailed the seas, the skies and space, ever since he was a lad of eighteen, before even the fall of technology and the rise of magic. He had buried too many friends.

"How many dead men have you toasted?" asked Zoltan.

Jacobs noticed that his partner looked half-dead himself: bowed and rumpled like a poorly folded map. He waited for Zoltan to continue.

"Seventy-five cancellations in the last twenty-four hours. At this rate we'll be lucky to book a fifth of the Horizon Cusp's berths for your next flight. Then there are the lawsuits, insurance problems, Mars and Earth are both investigating—"

Jacobs held out his glass for a refill, then slammed down the bourbon. He savored the burn against the unfairness of it all. In sixty-seven years he had never lost a ship, and now his business might be ruined over something he could not have helped. "I was going to retire next year."

"You've been saying that since I met you."

"I had a place picked out in Mazatlan."

"Your attention please," said a voice over the loudspeaker in the corner. "There has been an incident in the public area. Please proceed to your assigned safe zone in a calm, orderly fashion. There is no cause for alarm."

No cause for alarm? Jacobs gritted his teeth. His business and his future were spiraling out of control. He faced the real possibility of dying broke and homeless, starving in a gutter somewhere.