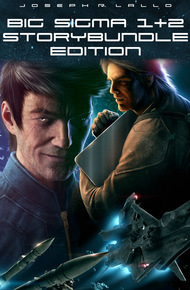 The Big Sigma Series is a science fiction adventure written by Joseph R. Lallo, author of the Book of Deacon and Free-Wrench.

This series, set approximately four hundred years in the future, shows the state of the galaxy through the eyes of a marvelously skilled but terribly unlucky former racer named Trevor "Lex" Alexander. The stories are often comic, sometimes dark, but always thrilling as Lex gets mixed up with the likes of mad engineers, quirky AIs, loose cannon mercenaries, faceless megacorporations, and organized criminals.

In Big Sigma 1+2: StoryBundle Edition is a special combo title created especially for this bundle. It contains the first full novels:

Bypass Gemini - In a distant future, Trevor "Lex" Alexander was shaping up to be the next great race pilot until a fixed race got him banned from the sport. Reduced to making freelance deliveries, he thinks his life can't get any worse. That's when a package manages to get him mixed up with mobsters, a megacorp, and a mad scientist. Now his life depends on learning what their plans are, and how he can stop them.

Unstable Prototypes - Eight months have passed since the Bypass Gemini incident, and Karter Dee - a brilliant inventor and dangerous sociopath - has been kidnapped by group of desperate extremists. To prevent the group responsible from unleashing Karter's lethal ingenuity, the inventor's quirky AI "Ma" convinces ex-Racer "Lex" Alexander to help assemble a team of former allies in order to mount a rescue.

Like most of the things I've done in my literary career, the Big Sigma series has found success in spite of my marketing efforts, rather than because of it. The very first story, Bypass Gemini, was just a fun little romp to experiment in a sci-fi genre. I didn't have any plans for it beyond that, but it ended up producing some fun characters, so I gave it a second outing. To my eternal surprise, when I offered it up to an in development StoryBundle, it was selected for their inaugural bundle. The series is now four books deep, with a fifth one in the works, but I was thrilled to get the opportunity to blow the dust off these first two stories and combine them for another appearance! – Joseph R. Lallo

Bolts of energy slapped into the engine bank, sizzling against the hull and causing the instruments to scream angry messages. There was a pop and the whole ship lurched downward. Lex pulled madly at the controls and hammered at the computer's interface. Neither felt like cooperating anymore.

"I repeat, you are entering my debris field, idiot. Alter course or become a part of it," a voice squawked over the com system.

"For God's sake, I am in distress! Out of control! Request immediate assistance!" Lex screamed.

A cloud of fist-sized debris splashed against the belly of the ship, the sound like a shotgun blast hitting a tin shack.

"Oh, man. If you think anyone can save you now, you have got your head so-o-o-o far up your ass. You are seriously fu—"

The rest of the eloquent thought was cut short as a chunk of floating metal passed through the antenna array. It didn't slow down much. A pleasant, calm female voice filled the cockpit.

He scrambled to pull the oxygen mask into place, his ears already popping. Mechanical arms emerged from around the control chair, glowing field emitters releasing their electronic whine as they began to charge up. Lex cinched the straps of the mask tight and waited for the field to snap into place. As he waited, listening to the voice make its customary warnings about keeping his hands and arms within the confines of the field, something managed to force its way from the back of his mind, through the assorted panic and confusion, and right to the front.

"The package!" he blurted.

With a desperate grab, he managed to snag a silver case and pull it back to his chest. An instant later, the field clicked into place with a faint ruby shimmer, and a hiss of gas restored the proper atmospheric pressure. He took a deep breath, pulled up the backup controls from the side of the harness, and tried to get control over the ship. The pilot-assist apparatus was out, but he never used it anyway. Just figure out the parts of the engine array that were damaged, compensate, and get the ship the hell out of this orbiting junkyard before—

He looked up just in time to see a flurry of metal shards, probably the former support structure of some defunct satellite, crash into what was left of his ship's view window. The first one sent cracks feathering through the transparent ceramic. The voice of the computer serenely declared a full hull breach, just in time for a second chunk to shatter through completely. Time seemed to slow as it continued through unimpeded. It spun in air before him for several seconds before it occurred to him that time didn't just seem to slow . . . it did slow. He leaned aside to see a little red indicator on his slowly-sparking control panel light up. Next to it were the words "TymFlex™ Safety System Engaged." Below was a timer, broken out to thousandths of seconds, ticking down from sixty. The numbers were creeping by.

The effect was surreal. He could see the ripple of tiny shock waves as clumps of metal clashed with his hull. All around him, bits of debris of various sizes sparkled in the starlight, slowly spinning and sailing along in their orbits. Bits of his ship's window drifted through the cabin, glancing harmlessly off of the emergency field around his chair. As a blunt, irregularly-shaped piece of wreckage, now moving slowly enough for him to recognize it as a door handle, rebounded off of the shield and spiraled lazily back into space, he tried to remember what the salesman had said when he was pitching this safety system.

It worked by creating a localized distortion in space-time, or something like that. Lex had never been good with details. Time within the distortion moved one hundred or so times faster than outside.

The salesman had explained that this reduced the kinetic energy of potentially lethal projectiles by making the universe think they had slowed down. Two thousand meters per second became twenty—not because the meters decreased, but because the seconds outside of the field were comparatively increased. The result was that the hunk of high-density tungsten that had formerly been moving several thousand miles an hour toward his forehead now clunked off the shield with the force of a lobbed softball. This was achieved with quantum this and temporal that, and various other high tech buzzwords that had been used to pad out the brochure. The wonders of science.

Of course, it wasn't without its flaws. The main one was that, if his math was right, the 59.378 seconds remaining would take over an hour. It gave him a lot of time to dwell on a few rather pressing questions. For instance, why had the ship that was now passing overhead decided to shoot at him? Why did this planet, supposedly uninhabited, have a lunatic shouting profanities at him over the com system? Did it have a breathable atmosphere? How exactly would a bubble of compressed time protect him from becoming a thin red paste when his ship hit the ground? He watched what appeared to be a novelty floor mat drift through the space beside the ship like it was flowing in molasses and decided that, since he didn't have any control over any of that, he might as well work on the most important question:

What the hell had gone wrong in his life that he had ended up in this mess?