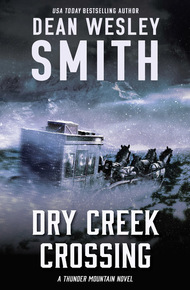 Concord Coaches hold a mythical place in the history of the Old West. Colfax Shaw and Anna Taber, born a hundred years apart, find a compatible interest in one old Concord.

Anna studies the math of situations and timelines while Colfax focuses on the history of it all.

But both the math and the history, normally solid and dependable for both Anna and Colfax, suddenly become erratic. All because of a Concord stagecoach.

Another exciting novel in the Thunder Mountain series.

The foothills west of Boise, Idaho

"Hang on!" Jack shouted to his boss, Steph, who was working the grader on the old hiking trail. They were expanding the trail so that it could be paved up to a campsite on the lower levels of Dry Creek.

Jack held up his hand and Steph ground the noisy, rumbling beast to a halt, a large pile of dirt and rock and sage in front of his blade where he had dug into a hillside.

The day around them was hot, even for the sagebrush-covered foothills above the Treasure Valley. The temperature had to have gone past a hundred by ten in the morning. Who knew what it was now at two in the afternoon. Too hot, as far as Jack was concerned.

Jack had on a wide-brimmed hat to shelter his face and a bandana he kept tied around his neck and soaked with cold water. He had on a white, sweat-stained T-shirt, and jeans and work boots.

He stood five-six and was married to his childhood sweetheart, Patricia. They had two great kids. Patricia taught kindergarten in the Meridian area and they had a nice home not far from here in Eagle that he was very proud of and kept up, spending time each weekend on one project or another. He loved that home.

Most of the time, when working, he had a shovel in his hand and today was no exception. Under his jeans he wore leather wraps from the tops of his heavy work boots up to his knees to avoid snakebites.

Rattlers in this brush and rock this time of the year were everywhere and he had had more than one strike at his leg when he wasn't paying enough attention or the grader noise covered up their warning rattles.

A couple times the grader had uncovered entire nests of them. That could give a guy a start, that was for sure.

When he saw one, he just chopped off its head with the shovel. He always threatened to bring a couple home for dinner, but Patricia promised divorce if he did that.

On a day like today, he went through a bottle of water every fifteen to thirty minutes just to stay hydrated. Worth working in this heat since this job paid so well. He had been doing it now for six years and he had no real complaints. Working out in the elements in the dead of winter was much worse than the heat and the snakes.

He stepped forward to look at what he had seen Steph dig up with the grader. It was a worn piece of smooth wood, long and curved. It looked like it might have been polished at one time.

And beside it was what was clearly part of a very large wagon wheel of some sort. Jack dug with his shovel around in the dirt a little more and found more pieces and some thick old leather strips.

He motioned for Steph to back up the grader and park it and shut it down. They were clearly done for the day until someone got out here and looked at what they had found. Historians would dig it out and give them the all clear when they could go back to work.

And then for a week after they started working again, someone from the historical society would be watching to see if they found more.

Historical relics in Idaho had become very important in the last ten years and were things he and Steph bumped into about once every two months. It always got them some paid time off before they could go back to work. And they often got complimented when they didn't do much damage to the site they had found.

Jack figured he got Steph stopped soon enough this time to make the historians happy.

These hills and the area around Boise were full of all kinds of history, from Native American settlements to early mining to the Oregon Trail camps. From what Steph had told Jack, the Oregon Trail was just about two miles from where they were right now, down closer to the Boise River.

Amazing stuff and actually Jack found most of it interesting. Steph was teaching him more and more about it all the time.

Jack dug a little more and realized this was either a large wagon or a stagecoach. Steph had told him the other day that they were on or near the old Kelton Road, a major route for stages and wagons back in the late 1800s and early 1900s. But no telling why a wagon or stage would have been left here, up on the hill in the brush and scrub like this.

Steph had shut off the grader, leaving the sounds of the hot wind blowing through the sagebrush as the only noise.

He had on the same type of hat and wet bandana around his neck that Jack wore. And as Steph walked toward Jack, he poured more water over his bandana and then took a large drink.

Working the ground part of the two-man crew was hot, but being up on that grader was much worse. Jack was more than happy to be the shovel man.

Steph took one look at the remains and shook his head, using Jack's shovel to move a few things around.

Steph was far, far smarter about the historical stuff than Jack was. Steph had even graduated from the University of Idaho with a history degree.

Jack had barely made it out of Emmett High.

"If I didn't know better," Steph said, "I would swear this was a Concord stagecoach. See the thick leather straps?"

"Those were used like shock absorbers on the Concords. This is quite a find."

"But what is it doing up here?" Jack asked.

Steph looked around, then shook his head with a puzzled frown. "Not a clue, actually. See that cut in the side of the hill about a hundred yards down?"

Jack could see what he was talking about. That was a cut done when they built a trail or a road.

"That's the remains of the old main road over to Freezeout back in the days of this coach," Steph said. "No idea why a Concord Coach would be this far off the trail."

"Looks like the historians have a real puzzle on their hands," Jack said.

Steph pulled out his phone and hit a number, then as he was waiting for the person on the other end to answer, he said, "They sure do. A whopper."