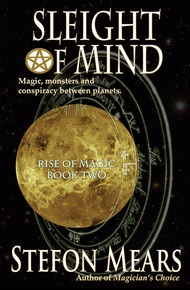 Sleight of Mind by Stefon Mears

Kennedy Spaceport on the moon. Humanity's first settlement off Earth. Where a handful of powerful families live above the law.

Journeyman wizard Donal Cuthbert runs through that spaceport. Pursued by the wrath of lunar Great Family.

If he survives, the worst trouble of his life awaits him.

Sleight of Mind, an exciting tale of adventure and intrigue at high space, with dueling wizards and battles between magic-driven ships. The second novel in the Rise of Magic series from Stefon Mears, author of the Cavan Oltblood series and the Spells for Hire series.

Donal Cuthbert sprinted through the near-empty private section of Kennedy Spaceport on Earth's moon, Luna, cursing his footwear. Loafers were all wrong for this. No support. No grip.

He should have been wearing sneakers. His girlfriend's fault. Li Hua had Donal dressing better and looking sharper, but he never thought to buy shoes enchanted for combat the way she did. Even her high heels.

But then, Donal rarely had to run for his life.

No help around him. Just wide blue-gray spaces that echoed his pounding steps. They would echo his pursuers in short order.

In the public part of the port he would have found security guards, other passengers, maybe a small crowd to lose himself in. But here he saw no one. Not even a janitor. Only hangar openings that seemed to go on for days, and arrows pointing the way to the one he sought: Bay Forty-Nine.

The place even smelled deserted. Nothing in the air but a vague herbal smell leftover from alchemical ship maintenance.

Donal sucked air and clutched his messenger bag — distressed leather, of course, which suited his state of mind. He could feel the bag rubbing his hip and shoulder raw as his legs stretched for more speed and his feet protested with blisters.

How much further was the damned ship?

Suddenly running beside him appeared his familiar, Fionn, a spectral deerhound of emerald green, a meter tall at the shoulder and eyes that blazed with courage. It spoke in an accent somewhere between Scottish and Irish.

"I have alerted the ship, but the captain dismisses this as a local problem."

Donal wanted to swear, wanted to beg Lugh or the Dagda for help, but could not spare the breath. His heart pounded faster than his feet. Sweat blurred his vision alongside matted strands of black hair. His legs burned with effort.

"We should seek shelter in a hangar and try to lose them."

Fionn understood. The cú sidhe fell back and would weave in the path to distract any attempts to use slingers, alchemical projectiles that could carry deadly effects. Difficult to make, expensive to commission, and illegal outside of military applications, slingers required spells strong enough to make them obvious to even the most casual customs inspections or weapons checks.

Just Donal's luck that he fled from a local family powerful enough to carry slingers anywhere they wanted this side of a helioship.

Cramp building in his stomach, legs beginning to falter from the sustained speed, Donal pressed on. Two more hangars to pass...

A spell ball the size of Donal's fist flew past his head. Smashed on a hangar wall. The spell took, cracking lines even in the thick, shaped rock. Donal pushed his legs harder, trying not to think of what that spell would have done to him, wishing he could have pulled off a moving protective circle.

Every part of Donal's body screamed in protest at his exertion. He had to have run flat out for half a mile by now, but still he could hear his pursuers. They had the air to shout curses, damn them, even while Fionn mocked them in Gaelic that would have made Donal's mother blush. Probably his father too.

Not his big brother Bran, of course, but Bran would have been in good enough shape to lose them. Or he would have taken them all on and won. But that was Bran.

At least no travelers crowded around Donal this time, to risk becoming 'collateral damage.' Not like on Mars.

Donal put his head down and threw the last of his energy into a final sprint.

John Jacobs paced the breadth of his Starchaser Spacelines office. He should have been at the docks. He had a ship to inspect, a route plan to confirm one more time, and no doubt another dozen forms to fill out. Someone in the San Francisco bureaucracy must have decided that forms meant fees, which meant more money.

And now Zoltan, his business partner, was late.

Jacobs paused at the sound of wood under his boots as he stepped off the throw rug in front of his huge purpleheart desk. He spent so many of his days listening to the sound of ship ceramics underfoot that oak flooring sounded wrong in his ears. Artificial. How could he consider retiring when only ships felt like home?

Jacobs returned to pacing, five steps fore, three steps starboard, five steps aft, three steps port, and on. He paced as though in his office aboard the Horizon Cusp, the ship he had commanded for the last decade, and not in his spacious Earth office, with its conference table, hide-a-bed sofa, and comfortable visitors chairs, most of which went unused even when Jacobs was on Earth. Clients met with Zoltan. But Zoltan insisted that Jacobs, as co-owner, had to have a big office in the home branch of Starchaser Spacelines. Something clients would find impressive.

Jacobs paused to shake his head. Appearances shouldn't impress. People should learn to judge actions, histories. But with his eighty-sixth birthday approaching, Jacobs felt like little more than history himself, one of the dwindling few who remembered life from before the rise of magic.

A knock at the door. Finally.

Jacobs felt his eyes narrow, his jaw clench at the sight of his partner: jowls shaking just a touch, fingers playing with the buttons of his silk shirt, and pants wrinkled, which at oh-nine-hundred meant that Zoltan had been awake for hours already, had likely not slept well. Even his graying curls had not been tamed to their normal positions.

Jacobs' nostrils flared a calming breath. Zoltan had earned the right to deliver bad news his own way.

"Rough couple of days. Mind if I sit?"

Jacobs held back the urge to say 'out with it.' Zoltan was not a member of his crew. Instead Jacobs nodded, and returned to his own ridiculously large padded leather chair.

"John, you know business has been down since the Beamrunner's accident."

"It's been rebuilding, and the business-class shuttle runs we've added have made the difference. Worried about your bottom line?"

"Always." For just a moment Zoltan smiled and looked like himself. But then the smile faded. "And you should be worried about your retirement."

"After this next voyage. I promise."

"You said that two years ago."

"This is different. The Venus run." Just the thought of it sent a thrill through Jacobs' system, made him rub his hands together like an eager boy. "A final hurrah for me, and peerless advertising for Starchaser Spacelines. We can sell when the value of the business is high, and—"

"I've already sold." Zoltan took a deep breath. "John, even you have to admit this flight is risky—"

"—and if this goes wrong the press will murder us. We'll never recover."

"I captained the first commercial flight to Mars. I think I can handle—"

"And how long ago was that?"

Zoltan leapt to his feet, leaned across the broad, dark desk. "Sell! Retire! Take that cat of yours and get that place in Mazatlan you've talked about."

Zoltan must have seen the battle stations in Jacobs' eyes, because he softened his tone. "You've had a hell of a career. Accomplished things that will get your name in the history texts. You've done enough. Live to enjoy it."

"I knew it." Zoltan shook his head and deflated back onto his overstuffed chair. "I had to try. Have it your way, John." He sighed again and looked up. "One last drink with your old partner?"

"You never give a fraction, do you?" Zoltan stood, dusted his shirt and pants with his hands. "Your new partner will be here in an hour or so. If you can forgive me, stay in touch. I've left my contact information with Cindy."

Zoltan started toward the door. "Good luck with the Venus run."

"Zoltan." Jacobs waited until Zoltan looked back at him. "It's been good working with you."

Zoltan smiled and left. Jacobs wondered whether he should have had that drink after all. He had a feeling he might need it.