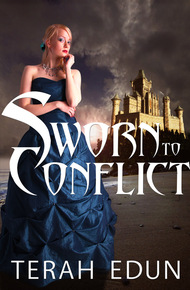 In this 3rd Book, Ciardis Weathervane is fighting a war in the North while battling the rules of love and trying to decide where she stands in the midst of competing sides. As she faces her greatest fears on the battlefields and her heart is torn between her love of Sebastian and loyalty to her family, Ciardis must choose her fate carefully.

This book was Terah's entry to the NaNoWriMo contest, and in all honesty she earned her place in the bundle on its strength alone. I actually read this story before the first two chapters in the series, and what floored me most was that despite having two full books of history, this book manages to ease the reader in with enough morsels of the past to grab your interest without burying you in exposition. I’m not sure a series has ever hooked me from the middle before, but this one certainly did. – Joseph Lallo

Ciardis heard a screeching sound in the air. It was coming from above. Just as she noticed everyone else did. The heads of every military man and woman surrounding her snapped up to survey the sky. And then the call went out.

Ciardis stared around in confusion as swords came out of scabbards, and with barely a look between them, Titus, Kane, the general, and Warlord Inga surrounded her in a box formation. Their weapons bristled as they faced outward, trying to defend the only defenseless person in the area. Unfortunately it wasn't enough.

Out of the sky came huge balls hurdling at impossible speeds. They crashed into the encampment all around her. The impacts caused craters to form, and walls of snow and dirt sprayed into the air. It made it impossible to see for minutes at a time as ball after ball after ball came hurtling down from the sky. When the dust and the debris settled, she was able to look between General Barnaren's shielded arm and the upraised arm of Titus standing next to him. What she saw made her stomach leap into her mouth. In outright terror. The balls were crystalized masses that easily gained the height of two men. Many had shattered on impact. Others were now fracturing in spider web patterns. She heard the web pattern cracking across the balls of ice in a chilling sound that reminded of her of the noise a frozen lake made when the surface cracked. The huge balls were perfectly spherical. Shadows and shades moved around in the centers as if a dark, dense mass resided inside. With horror, she and those around her soon realized why. Out of the ice capsules spewed dozens of nightmares—ravenous spidersilks. They reared up on a multitude of spiked legs and charged the soldiers around them.

In the chaos, the huge capsules kept falling. Her barricade of defenders didn't last long. A capsule fell directly in the middle of the group, forcing everyone to roll and duck for cover in the snow. Ciardis was grabbed and scooped up by Titus, who put her behind him and took on a giant purple spidersilk with six poisonous fangs and a body that was as tall as Inga. She realized suddenly that Inga's spidersilk was on the small side. And that wasn't a good thing.

All around her soldiers were losing the battle as the spidersilks cut a swath through the unarmored men who'd rushed to the center of the fight. But Inga's women were holding their own. They wielded their battleaxes with the ease of seasoned warriors and moved with the speed and dexterity that matched the spidersilks' fast gait.

Titus wore armor and chainmail, which was helping him in his battle. He swung his doubled-headed battleax and took off the leg of the venomous beast facing him. It screamed in fury but it did not stop. Two of its mighty forearms speared down to pierce Titus's armor, leaving a trail of slimy ichor in its wake. Ciardis realized that the legs as well as the fangs on the damn things were poisonous.

Titus screamed and swung the axe again, taking off its head.