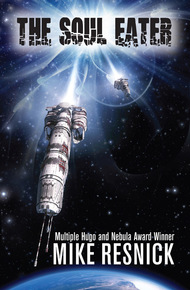 The Soul Eater by Mike Resnick

Starduster. Some don't believe it exists at all. Others worship

it. A handful will pay any price to kill it and display its

But it remains for one man, Nicobar Lane, the most

accomplished hunter of the galactic era, to find out what it

really is, to match wits and will power and skills against

something that is both too alien and too familiar.

Now that he knows the Dreamwish Beast exists, Lane becomes obsessed with killing it, much as Ahab was obsessed with killing the white whale…but the whale was an unthinking beast, while this one can establish contact with Lane long enough to ask what it has done to make Lane want to kill it. Join this Ahab as he reluctantly pursues the secrets buried inside him. Join this interstellar Moby Dick as he tempts and tortures his pursuer.

At the bar sat a trio of prospectors from Rakhvad, their bluish skins glistening like no other human subspecies; a pair of traders, brilliantly dressed with the spoils of their latest dealings, huddled over a small table near the door, where the lighting would make them brighter still; in the back of the tavern, playing jabob—an offshoot of blackjack, with a 52-48 break for the house—were five members of the native humanoid race of Dabih Minor, with their wide-set cat's eyes and almost nonexistent ears. Two of the whores from another part of the building were taking a beer break, casting don't-you-dare-come-hither glares at anyone who chanced to look in their direction. Men with money and men without, scaly men and hairy men, the momentarily rich and the momentarily poor, all squeezed and jammed themselves into Tchaka's.

Into this mass of humanity and semi-humanity stepped Ector Allsworth, a portly, balding man of enormous proportions and a deathly gray cast to his leathery skin. He looked prosperous, even by the boom-or-bust standards of the Tradertowns. His yellow eyes scanned the room for a moment, and then he walked over to the bar. The bartender pointed to a lone man sitting at a small table in the farthest and darkest of the oddly-shaped tavern's many corners. Allsworth nodded his thanks and walked over to the man.

"Is this yours?" he asked, dropping a small pale gold business card onto the table.

The man stared at it for a moment

"What can I do for you?" said Lane, slowly sipping his Cygnian cognac.

"Mr. Lane," said Allsworth, "I won't mince words. My name is Ector Allsworth, and I represent the Vainmill Syndicate."

"Never heard of it."

"I don't doubt it. They're one of a number of holding companies controlled by Ilse Vescott. Does that name mean anything to you?"

"You're looking at me as if it should," said Lane.

"She's just about the richest woman in the entire Deluros System," said Allsworth.

"That's a long way from here," said Lane. "This is the Inner Frontier, Mr. Allsworth. You'll have to forgive us if we don't keep up to date on the social and financial doings back at Deluros. However, I am properly impressed with your credentials, so please go on with whatever proposition you have in mind."

"Among the more philanthropic aspects of the Vainmill Syndicate are a number of museums and zoos," said Allsworth. "I have been told that you're the best hunter in this area, and there are a number of specimens we need at this time."

"You must understand, Mr. Allsworth," said Lane, "that I never supply specimens to zoos. 'Hunter' is perhaps too broad a term."

"If you're not a hunter, just what are you?"

"A killer," said Lane, taking another sip of his drink. "That's what I do for a living: I kill things. Which does not preclude my working for your museums. What is it that you need so desperately that you came all the way to Northpoint?"

"Not impossible," said Lane. "How much are you prepared to pay?"

"Unacceptable," said Lane. "The people out here don't have too much faith in the longevity of your Democracy. Credits aren't worth the paper they're printed on."

"All right," said Allsworth. "You name the currency."

"The new-series Maria Theresa dollars they're using in the Corvus system."

"The Corvus system!" Allsworth exploded. "That bunch of wild-eyed insurrectionists!"

"I don't give a damn about their politics," said Lane. "Just their money. Twelve thousand dollars apiece."

Allsworth seemed lost in thought for a moment, then looked up and nodded his head. "I also need five Baffledivers."

"You may have to wait a year or so for them."

"Twenty thousand apiece, and a forty percent bonus if you can deliver them in four months."

"The price is fair enough," said Lane. "Forget about your bonus. It'll take more than a year. Anything else?"

"I was wondering when you'd get around to it," said Lane, the trace of a smile on his lips.

"I don't quite know what you mean," said Allsworth.

"Sillyworms and Baffledivers aren't exactly pedestrian, but they're not rare enough to cause a man of your obvious station in life to chase all the way to hell and gone just to tell me that you want them. We could have consummated this whole thing by radio. So you rather obviously want something else."

"You seem to think you know what it is," said Allsworth.

"Of course I know what it is," said Lane, irritated. "It's the only reason anyone ever comes out here to see me. You want me to hunt down the Dreamwish Beast."

"There's nothing reasonable about it. First of all, the odds are about twenty to one that the Dreamwish Beast is just a myth, a fable made up by some demented old cargo hand who cracked from the boredom and started believing in his nightmares. Second, if it really exists, it's the only life form we've ever run across that lives in space and the only one that eats energy. And if you know a way to kill something that eats energy, I'd be mighty indebted to you if you'd tell me about it."

"All I'm prepared to tell you about is how much we are willing to pay."

"Not interested. It's just a story to scare children with. Even the name is crazy. We happen to live in a sexual universe. If there is one Dreamwish Beast, there's got to be more: a parent, an offspring, an original body that this creature split off from. But there isn't anything like that. There's just one Dreamwish Beast—which is paradoxical, which means there isn't any such thing."

"It's been spotted," said Allsworth.

"I can give you its coordinates as of five days ago," said Allsworth.

"No you can't," said Lane. "What you can give me are the coordinates of some loony spacehand who fantasizes a little better than his shipmates."

"How does ten million credits or its equivalent in any currency you name sound to you?"

"Like a lot of money," said Lane. "Why don't you offer it to someone who feels like spending the rest of his life chasing a dream?"

"What if we pay your expenses while you hunt for it, once you've rounded up the other stuff?"

"Forget it," said Lane, rising. "I'll radio you once I've got your Sillyworms and let you know where I've dropped them off. I assume a message to the Vainmill Syndicate will reach you?"

Lane shook his head. "Try asking some hunter who's out to make a name for himself and isn't too bright."

"We've got about two hundred of them," said Allsworth, trying to suppress a guilty smile.

"Why not?" replied Lane with a shrug. "You're only going to have to pay one of them at the most." He shook Allsworth's hand and walked out onto the dusty unpaved street. The wind was blowing from the west, and as he walked the five hundred yards to his combination office and hangar, he had to pull down his facemask to protect his eyes from the flying dirt and sand.

Once there, he opened the door and walked directly to the antique desk which was tucked neatly into a corner of the room. It was covered by piles of papers: orders, some new, others dating back five and six years, all waiting to be filled. He added Allsworth's requests to the pile, then lit a pipe and settled back in an easy chair, surrounded by tokens and mementos of a quarter-century of stalking exotic creatures on even more exotic worlds.

He dozed for a few minutes, then awoke suddenly as he began choking on the smoke from the tobacco. He put the pipe out, rinsed his face off, opened a bottle of Alphard brandy, poured himself a small glass, and sat down at the desk, pen in hand. The Deathmaker was stripped down completely, its hull repaired and strengthened, its engines overhauled, its nuclear pile replaced, and he would have to equip it from scratch before going out again. He glanced over some of the orders and began estimating what he'd need: a laser cannon, two vibrators, a molecular imploder (if he could get his hands on one somewhere on Northpoint). There'd be the standard hand weapons: the stungun, the screecher, and an old-fashioned laser pistol. He checked his source books for the correct taxidermy kits for the various animals he planned to slay, computed the amount of food and air he'd need and then tripled it, marked down the proper star charts to incorporate into the ship's three-dimensional Carto-System.

Then he checked out the worlds he'd be visiting on this particular hunt—three oxygen, two chlorine, one methane, two ammonia, one unknown—and estimated the number and strength of the protective suits and systems he'd need. He also made a note to check the decontamination chamber and one of the airlocks that hadn't been functioning properly toward the end of the last hunt. Going over his back orders more thoroughly, he decided that he'd have enough cargo space for a five-month hunt, possibly six if he had trouble with the Devilowls.

Then came the crew. The Dabihs made the best skinners, and he decided to take a pair of them along. He considered hiring a chlorine-breather, but decided he'd waste too much time going to Asterion VIII—the nearest outpost of sentient chlorine-breathers—to make it worthwhile. As usual, he rejected the idea of adding a methane-breather to the crew; not only were they rare as hen's teeth, but they tended to shatter like so much glass if they weren't totally insulated from noise.

That left the Lord High Mufti, which was more mascot than crew member, more court jester than sailor, quite possibly insane if it had a mind at all, and a genuine hazard during all phases of a hunt. Still, he would have felt somehow incomplete without the Mufti, so he computed its food supply—live insects and dead reptiles—and jotted down a reminder to tranquilize it just before takeoff.

He made arrangements to leave in five days, which would give him time to hire his crew, equip his ship, and have one last fling at all the pleasures of Tchaka's, alcoholic and otherwise.…