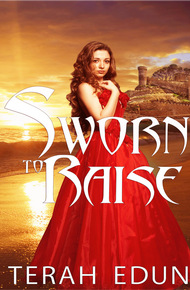 In this 1st Book, Ciardis Vane moves to the courts of Sandrin. She grew up in the snowy vale of Vaneis. When she’s chosen to train as a court Companion everything she has ever known is gone. She must fight and win the right to choose a Patron while learning the magical skills inherited from her ancestry.

I'm a sucker for a strong setting, and what grabbed me about Terah's writing was her solid and gorgeously defined world. From the very first page everything from the petty gossip to the underlying culture and customs of society unfolds in brilliant detail that you can’t help but imagine and enjoy. – Joseph Lallo

Ciardis Vane watched the townspeople jeering as the local Gardis strapped the highwayman into the stocks. Frowning Ciardis wormed her way closer to the front of the crowd, straining to get a peek at the criminal. She felt no pity for the condemned man; he would die tonight, regardless of her feelings. The nightwolves were already pacing, their shadowed forms just visible in the dense tree line, waiting for darkness to fall.

Without the protection of the house wards, the highwayman would be defenseless locked in the stocks. I wish I could say it will be a quick death, she thought with clinical detachment, but they'll probably go for his guts first. The man deserved no less than death in any case; he had done nothing but steal from—and sometimes kill—those who traveled the Imperial coach roads. "Stand and deliver," indeed!

Ciardis pushed back her heavy brown curls with a sun-bronzed hand. Turning slightly to the side she whispered about his crime with the other washer maids who'd come to see the spectacle. Suddenly, she felt a sharp pinch on her wrist. Turning to see who had interrupted her entertainment, she looked over and frowned down at the younger woman who now stood by her side.

Wringing her hands anxiously, Margaret looked up at Ciardis and gave a quick jerk of her head to the side to indicate they should speak outside the crowd. "You'll want to hear this firsthand, Ciardis," Margaret said with urgency.

"All right, all right," Ciardis muttered as they made their way out of the crowd and down to the washer station with a few other girls trailing behind. The slight blonde woman who scurried next to her was a great source of village gossip, and Ciardis knew that whatever she had to say would be worth leaving the spectacle in the midst of the judge's punishment. To Ciardis, a good piece of gossip was as welcome as spun gold...usually.

When they'd walked far enough from the crowds Margaret was quick to tell Ciardis the news that she'd heard from the weaver's daughter who'd heard it in the apothecary the day before.

Practically bursting with the pent up the news Mags bounced on the balls of her feet as she said, "Fervis and the caravan girl...they're together Ciardis."

"They're together?" Ciardis said with disgust, "No, he's with me."

Mags shook her whole head, curls bouncing every which way, in denial.

"They were seen, getting in a big fight and then..." said Mags.

"So?" interrupted Ciardis in disdain, "That means nothing."

Patiently the girl continued, ignoring the interruption, "And then the girl's father came and threatened to kill Fervis. One thing led to another and now they're bound."

This bit of news hit Ciardis with all the weight of a lead brick.

At this point Ciardis was staring off in the distance – hand pressed flat against her stomach as if by holding it she could keep her stomach from plummeting in despair.

Minutes later the town bell rang signaling that the highwayman had been sentenced and imprisoned. Everyone would be going back to work now.