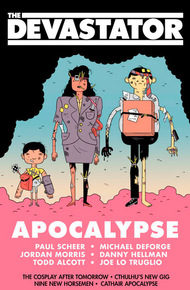 The Devastator: Apocalypse drops the big one on pop culture's obsession with doomsday. Crawling out of the wreckage are parodies of H.P. Lovecraft, Planet of the Apes, Escape From New York, The Road and more! Featuring contributions from Paul Scheer, Joe Lo Truglio, Danny Hellman, Jordan Morris, and an explosive cover by Michael DeForge. Flip the book around for Oh, the Flesh You Will Eat!, an infectious Dr. Seuss spoof that shows an epidemic from the virus' point­of­view.

Our newest and most star-studded entry in The Devastator funny book series. Working with Paul Scheer and Joe Lo Truglio melted our brains like an atomic blast. – Geoffrey Golden, The Devastator

*Earth­58008 is a new universe in the Marvel Multiverse created by the author, because no Marvel universe had all the awesome stuff needed for this fan fic.

It all started with one simple thing: eighteen huge explosions.

Andy Forsyth knew it would get bad when Coriolanus Snow was elected president, and it totally did. Andy’s writing about the Men’s Rights movement was good. Too good. Andy’s thoughts on male empowerment had been gaining traction like a snowball of truth rolling down the wintry mountain of America’s consciousness. But this avalanche of awakening was too much for President Snow, so he dropped his secret weapon on Andy and all of Raleigh: a bomb that turned everyone into zombies and/or marauding road gangs.

However, Andy wasn’t on the surface when the bomb went off. He was in the basement of Enloe High School: the special place where he thought important thoughts, like how to attain equality for all and how best to sexually satisfy his girlfriend, Enloe cheerleader Amber Lynne, and NOT the place where Andy went to “play with himself,” no matter what Evan Friedman wrote on the locker room wall. And the basement was where Andy was at this very moment with his close friend, Snake Plissken.

“I gotta tell you,” said Snake, “escaping from New York was tough. So was escaping LA. But even with someone as resourceful, ingenious, witty and totally not awkward in social situations, just introverted as you, I think escaping North Carolina’s Research Triangle Region will be my toughest challenge yet.”

“I have a plan,” said Andy, embodying bravery with the power of a thousand thunderclaps. “We go towards Amber’s house. She’s there having a slumber party/pillow fight/make­out session with Kate Gardner and Giordana Crespo.”

“Giordana, the Italian exchange student, and Kate Gardner, who draws totally awesome manga nudes?!” exclaimed Snake with excitement filled with hope and wonder. “That sounds amazing, but how will it keep us safe from the hordes outside?”

“Former Sheriff Rick Grimes and I built an underground shelter at Amber’s house. She stays there at all times when I’m not there to protect her, just to be safe,” said Andy, chivalrously. “We have to go. Kate says I have one of the most amazing bodies she’s ever seen, and I promised I’d let her draw me. I’m not going to let some apocalypse get in the way of my promise.”

“But can we beat Tucker Hartford’s gang of zombie slaves?” asked Snake.?“Tucker Hartford? The rich prep who uses his lawyer­dad’s money to buy Abercrombie

clothes and influence?” asked Andy, righteous anger boiling up in him like a social justice soup on the hot oven of truth for too long.

“Yeah,” said Snake. “I hear he’s been blocking the road the same way he used to

cockblock anyone who didn’t pop their collar.”?Andy thought about the risks, but his love for Amber overpowered his fears like a thief